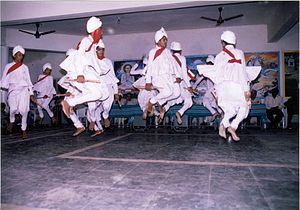 Mer Dandiya a sword dance performed by the communities of Saurashtra

Sword dances are recorded throughout world history. There are various traditions of solo and mock-battle (Pyrrhic) sword dances from Asia and Europe.

General types of sword dance include: 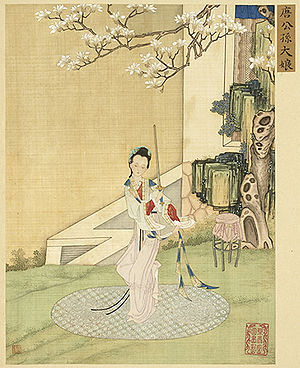 Lady Gongsun of the Tang dynasty, who was known for her elegant sword dancing, as depicted in Gathering Gems of Beauty (畫麗珠萃秀)

Sword dances in China, known as jian wu, began as a military training exercise with swords and spears which evolved into an elaborate acrobatic dance.[1] Jian wu was one of four classical dances that were used in the Chinese opera. Each of these dances was very meaningful within the opera performances and they often were used for plot descriptions and characterization.[2] Sword dancing also found a use in Chinese culture through communicating with the supernatural; sword dancing was done in an effort to communicate feelings to the dead spirits that may be disrupting a household.[3]

There are quite a few styles within the actual art of sword dancing. The first style focuses on relaxation and flexibility while the other style focuses on speed and strength.[1] There are also different types of swords and weapons used during each dance. A long sword is usually wielded with slower dramatic movements during a solo performance while shorter, scimitars are used at a very high pace during a sword dance between two or more people.[1] Each style requires certain movements that require the dancer to be highly agile and athletic.

Many sword-dances in present-day India, Pakistan and Bangladesh originated with the martial traditions of the region. The paika akhada which were previously used to train Orissan warriors now perform weapon dances in the streets during festivals. Other dances like the mer dandiya are simply theatrical depictions of battle, while some like the choliya of the Kumaon region were used to ward off evil spirits. Sword dances are still commonly performed for weddings and other occasions in India, Pakistan and Nepal today. 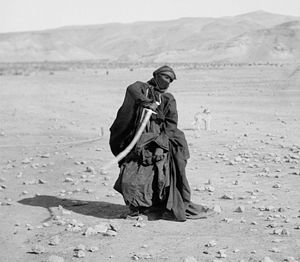 Arab sword dances (raqs al-saïf) evolved out of sword fighting between men, in both Egypt and Turkey. There was even a time when sword dancing was banned by the sultan during Ottoman rule, as it was believed that dancers, who took swords from soldiers and pretended to "kill" them at the end of the performances, collected the swords to begin a resistance against the army. These swords were never returned. Female sword dancing was not widespread in the West Asia. Men in Egypt performed a dance called el ard, a martial dance involving upraised swords, but women were not widely known to use swords as props during their dancing in public. However, paintings and engravings by French artist Jean-Léon Gérôme (who visited Egypt in the 18th century) show sword dancers balancing sabers on their heads. The Turkish Kılıç Kalkan dance of Bursa is performed exclusively by men with a sword and shield, and represents the Ottoman conquest of the city. The performers wear early Ottoman battle dress and dance to the sound of clashing swords and shields without music. Sword dancing is widespread in Iran and Turkey today.

Mock battle sword dances are found worldwide, varying from the Greek Xiphism, the ancient Roman Saltatio Armatum, to Asian mock-battles. Some European sword dances, such as Moreshka from the island of Korčula in Croatia, include both hilt-and-point and mock battle sequences.[citation needed]

Hilt-and-point sword dances are, or were, performed all over Europe. These are particularly concentrated in an area corresponding to the boundaries of the Holy Roman Empire at around 1400-1500, and many of these traditional dances are still performed in England, Czech Republic, Germany, Austria, North Italy, France, Flanders, and the Iberian Peninsula, with a particular concentration in Basque Country.

An important concentration of traditional sword dances can be found on the Italian side of the western Alps. Main sites are Giaglione, Venaus and S. Giorio in the Susa valley, where the so-called "Spadonari" (sword-holders) dance is still now performed between the end of January and the beginning of February. This dance is also connected with the rebirth of nature and vegetation.

In Romania, in a dance called Calusari, a sword dance similar to a Morris Dance, is part of a more complex ritualistic dance involving elements of fertility ritual and horse worship.

Hilt-and-point sword dances traditional to England include rapper sword and long sword, although both of these are now also performed by revival teams outside their traditional areas, including teams in most of the English-speaking world. English sword dancing has also been brought to the New World, initially as part of the "morris revival" of the 1970s and 1980s. Teams are now extant in most major metropolitan areas in North America. The New York Sword Ale is an annual gathering over Presidents' Day weekend that brings together over a dozen sword teams form the east coast and around the world.