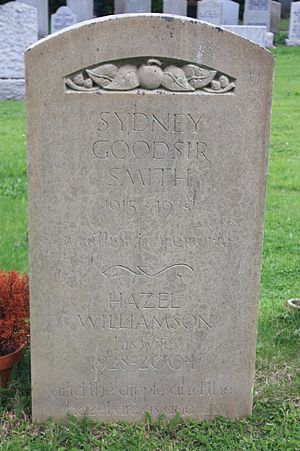 Sydney Goodsir Smith (26 October 1915 – 15 January 1975) was a Scottish poet, artist, dramatist and novelist. He wrote poetry in literary Scots often referred to as Lallans, and was a major figure of the Scottish Renaissance.

He was born in Wellington, New Zealand, and moved to Edinburgh with his family in 1928.[1] He was at school at Malvern College. He went to Edinburgh University to study medicine, but abandoned that, and started to read history at Oriel College, Oxford; whence he was expelled, but managed to complete a degree.

His first poetry collection of many, Skail Wind, was published in 1941. Carotid Cornucopius (1947) was a comic novel about Edinburgh. His play The Wallace formed part of the 1960 Edinburgh Festival.

Smith was also associated with the editorial board for the Lines Review magazine.[2][3]

Under the Eildon tree (1948), a long poem in 24 parts, is considered by many his finest work;[1] The Grace of God and the Meth-Drinker is a much-anthologised poem. Kynd Kittock's land (1964) was a commission of a poem to be televised by the BBC.

He died in the Royal Infirmary of Edinburgh[2] after a heart attack outside a newsagents on Dundas Street in Edinburgh and was buried in Dean Cemetery in the northern 20th century section, towards the north-west.

He is now commemorated in the Makars' Court.