Sylvain Chavanel Albira[3] (born 30 June 1979) is a French professional road bicycle racer. His brother Sébastien Chavanel is also a cyclist. Chavanel started his professional career in 2000 with Jean-René Bernaudeau's team Bonjour, which became Brioches La Boulangère in 2003. He is currently riding for UCI ProTeam Direct Énergie. He is left-handed.[4] Chavanel is a strong all-rounder who has won both sprints and time-trials, and is a good northern classics rider.

Chavanel was born in Châtellerault, France, although his family roots are in Spain. His great-grandparents were from Huesca, in the Aragon region. His grandfather was born in Barcelona and moved to Châtellerault during the Spanish civil war. Other members of the family still live in Aragon.[3] It is the Spanish link that gives Chavanel the double name of Chavanel-Albeira, although he uses it only on official forms.[3] He said: "Last year [2007], when the Vuelta was in Zaragoza, I got to know the cousin of mine using a journalist as the translator and she gave me a picture of my grandfather when he was young. Despite my origins, I hardly know a word of Spanish – just swear words".[3]

As a child he played in the garden with models of racing cyclists. He said:

We've got quite a big family and we're all into cycling. I remember playing out in the garden with my three brothers and sister with little figures that we gave names to. I was usually Greg LeMond, then later I went on to be Miguel Indurain then eventually Laurent Jalabert. I remember LeMond's accent. I liked the way he spoke French. I just thought he was a nice guy and I liked his style of riding.[5]

Chavanel began cycling at Châtellerault school when he was eight. He gave up to try football, then went back.

I started cycling again at 12 and from then on I improved every year. I was a fragile little thing, immature physically. I used to finish races halfway down the girl's field and at the back of the boys'. Everything changed the day that I beat my elder brother, Frédéric, in the cadet category, although he was better than me at the time.[5]

He began racing when he was 13. He won 29 races on the road as a schoolboy and a junior. He won the national junior individual pursuit championship in 1997. His uncle, Philippe Raby, a former rider in the Vendée region, recommended him to Jean-René Bernaudeau who was building a professional team based there. Bernardeau saw Chavanel race for the first time at Montreveau, in Maine-et-Loire, when he was racing against riders from Bernardeau's Vendée U junior team.

Bernardeau and Chavanel agreed that Chavanel would spend another year with his club, AC Châtellerault, which had spent time and money on his training. Bernardeau's assistant, Thierry Bricau, was given the job of providing Chavanel with a training programme. Chavanel rode the Tour de l'Avenir in 1999 and then in 2000, aged 21, he turned professional for Bernardeau's Bonjour team, sponsored by a chain of local newspapers. He won the first stage of the Circuit Franco-Belge and lost his leader's jersey only on the last day. He also won the climbers' jersey in the Tour de l'Avenir by breaking clear in the Pyrenees and rode 217 km alone at the front of Paris–Tours.

Sylvain has some of the faults I had as a young rider. He's always working at the front of the race – you have to rein him in for his own good. At his age, life is beautiful and risks are there to be taken. But he's acquiring self-knowledge and his days of gratuitous long-range sorties and suicide attacks are coming to an end.[6]

Chavanel rode his first Tour de France at 22, finishing 65th, later coming third in the Tour de l'Avenir behind Denis Menchov and Florent Brard. In 2002 he won the Four Days of Dunkirk and finished third in the Tour of Belgium. He later won both of those races in 2005.

On 25 July 2008 Chavanel won the 19th stage of the Tour de France by outsprinting Jérémy Roy at Montluçon. That and other performances brought him election as the most combative rider of the race.

On 3 September 2008, he came second in the time-trial stage of the Vuelta a España at Ciudad Real. His ride brought him to second place overall, two seconds slower than the American, Levi Leipheimer. His team worked for him next day from Ciudad Real to Toledo to make sure he won time bonuses offered along the route. The six seconds he collected were enough to give him the leader's jersey on 4 September.

Chavanel said in 2007 that he had had offers from foreign teams but was discouraged from joining them because he was unsure of his pension payments outside France. In July 2008 he said he had agreed with Patrick Lefevere the directeur sportif to join the Quick Step team in Belgium for 2009. Chavanel said he made his decision to move after riding well in classic races in Belgium at the start of the year.[7] He won Dwars door Vlaanderen and the Brabantse Pijl. He said:

I had other options as well. Professionally, it's an experience that can only do me good. I had the chance to sign for three years with AG2R-La Mondiale but I had the feeling that I wasn't going to develop enough. I have always raced in France and, in my heart, some experience abroad has excited me for some time. I therefore decided to take the step and Patrick Lefévère's advances completely persuaded me.[7]

During the 2010 Tour de France, Chavanel took over the yellow jersey after attacking at the 10 km mark on stage 2. Following a series of crashes affecting the General Classification contenders on the descent into Spa, the race was neutralized for every rider except Chavanel, who was the lone escapee at that time. He capitalized on that, opening up enough of a gap to win the stage and capture the yellow jersey from Fabian Cancellara (Team Saxo Bank).[8] The following stage was not so good for Chavanel as two punctures on the cobbled roads meant Fabian Cancellara re-took the yellow jersey, however on the Tour's first mountain stage from Tournus to Station des Rousses Chavanel bridged the gap to an early breakaway and rode away to take a famous win and inherit the yellow jersey for the second time.

In the 2011 Vuelta a España Chavanel held the red leader's jersey for four stages. On stage three, as part of a breakaway, he finished second behind Pablo Lastras which left him second in general classification, 20 seconds behind Lastras.[9] However on the next stage Chavanel finished just 57 seconds behind the stage winner while Lastras lost over 18 minutes, thereby making Chavanel the overall leader of the Vuelta.[10] He held this jersey until stage 8 where it was taken by Joaquim Rodríguez.[11] 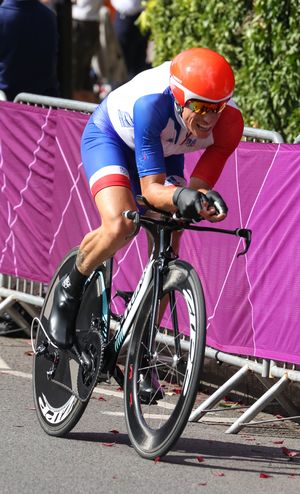 Chavanel competing in the 2012 Olympics time trial in London

In 2012, Chavanel won the Three Days of De Panne and won the French National Time Trial Championships for the fourth time.

In 2013, after strong appearances in the Tour de San Luis and the Volta ao Algarve, Chavanel won stage six of Paris–Nice,[12] taking the points classification at the race. Chavanel also won the overall classification at the Three Days of De Panne for the second year in a row, winning the final time trial stage.[13]

After winning the National Time trial title, Chavanel went on to win the Tour du Poitou-Charentes thanks to a great performance in Stage's 4 time trial.[16] A couple of days later, Chavanel topped a very successful week as he prevailed in the World Tour race GP Ouest-France by winning the sprint out of a small group ahead of Arthur Vichot.[17]

In September 2015 Direct Énergie announced that Chavanel would join them for the 2016 season.[18]

Chavanel is known as Chava,[1] Mimosa or Mimo, after a French film character he imitates.[5] In the Dutch-speaking Belgian media, he is often nicknamed 'La Machine' for his outstanding stamina and determination.[19][20]