Sylvester McCoy (born Percy James Patrick Kent-Smith: 20 August 1943) is a Scottish actor, best known for playing the seventh incarnation of the Doctor in the long-running science fiction television series Doctor Who from 1987 to 1989 – the final Doctor of the original run – and briefly returning in a television film in 1996 and for his role as the wizard Radagast the Brown in Peter Jackson's film adaptations of The Hobbit.

He was born Percy James Patrick Kent-Smith in Dunoon,[1] on the Cowal peninsula, to an Irish mother and English father, killed in action in World War II a couple of months before his son was born. His maternal grandmother was from Portadown, Northern Ireland. [2] He was raised religious, but is now an atheist.[3]

He was raised primarily in Dunoon[4] where he attended St. Mun's School. He then studied for the priesthood at Blair's College, a seminary in Aberdeen between the ages of 12 and 16, but he gave this up and continued his education at Dunoon Grammar School. After he left school he moved to London where he worked in the insurance industry for 5 years.[5] He worked in The Roundhouse box office for a time, where he was discovered by Ken Campbell.[6] 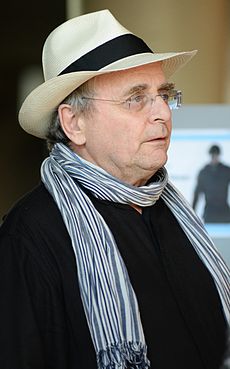 He came to prominence as a member of the experimental theatre troupe "The Ken Campbell Roadshow". His best known act was as a stuntman character called "Sylveste McCoy" in a play entitled An Evening with Sylveste McCoy (the name was coined by actor Brian Murphy, part of the Roadshow at the time), where his stunts included putting a fork and nails up his nose and stuffing ferrets down his trousers, and setting his head on fire. As a joke, the programme notes listed Sylveste McCoy as played by "Sylveste McCoy" and, after a reviewer missed the joke and assumed that Sylveste McCoy was a real person, Kent-Smith adopted this as his stage name. Some years later, McCoy added an "r" to the end of "Sylveste", in part because of the actors' superstition that a stage name with thirteen letters was unlucky.

Notable television appearances before he gained the role of the Doctor included roles in Vision On (where he played Pepe/Epep, a character who lived in the mirror), an O-Man in Jigsaw and Tiswas. He also appeared in Eureka, often suffering from the inventions of Wilf Lunn and as Wart, assistant to StarStrider in the CITV series of the same name. McCoy also portrayed, in one-man shows on the stage, two famous movie comedians: Stan Laurel and Buster Keaton. He also appeared as Henry "Birdie" Bowers in the 1985 television serial about Scott's last Antarctic expedition, The Last Place on Earth.[7]

McCoy also had a small role in the 1979 film Dracula opposite Laurence Olivier and Donald Pleasence,[8] and has sung with the Welsh National Opera.

McCoy became the Seventh Doctor after taking over the lead role in Doctor Who in 1987 from Colin Baker. He remained on the series until it ended in 1989, ending with Survival (see List of Doctor Who serials). As Baker declined the invitation to film the regeneration scene, McCoy briefly wore a wig and appeared, face-down, as the 6th Doctor. He played the Doctor in the 1993 charity special Dimensions in Time, and again in 1996, appearing in the beginning of the Doctor Who television movie starring Paul McGann as the Eighth Doctor.

In his first series, McCoy, a comedy actor, portrayed the character with a degree of clown-like humour, but script editor Andrew Cartmel soon changed that when fans argued that the character (and plots) were becoming increasingly lightweight. The Seventh Doctor developed into a much darker figure than any of his earlier incarnations, manipulating people like chess pieces and always seeming to be playing a deeper game. A distinguishing feature of McCoy's performances was his manner of speech. He used his natural slight Scottish accent and rolled his rs. At the start of his tenure he used proverbs and sayings adapted to his own ends (e.g. "There's many a slap twixt cup and lap" — Delta and the Bannermen), although this characteristic was phased out during the later, darker series of his tenure. In 1990, readers of Doctor Who Magazine voted McCoy's Doctor "Best Doctor", over perennial favourite Tom Baker.[9] 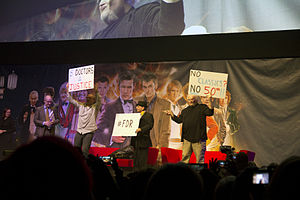 McCoy's television roles since Doctor Who have included Michael Sams in the 1997 telemovie Beyond Fear, shown on the first night of broadcast of Five. He has also returned to play the Seventh Doctor in a series of audio plays by Big Finish Productions. In 1988, while still appearing in Doctor Who, McCoy presented a BBC children's programme called What's Your Story?, in which viewers were invited to phone in suggestions for the continuation of an ongoing drama.

He has also acted extensively in theatre in productions as diverse as pantomime and Molière. He played Grandpa Jock in John McGrath's A Satire of the Four Estaites (1996) at the Edinburgh Festival. He played the role of Snuff in the macabre BBC Radio 4 comedy series The Cabaret of Dr Caligari.

In the early 1990s, McCoy was attached in the role of Governor Swann in Pirates of the Caribbean: The Curse of the Black Pearl when Steven Spielberg was planning on directing, but Disney did not give permission for the film to be made. McCoy was the second choice to play the role of Bilbo Baggins in the Peter Jackson The Lord of the Rings film trilogy.[6] In 1991, he presented the Doctor Who video documentary release The Hartnell Years showcasing selected episodes of missing stories from the First Doctor's era.

On stage he appeared as the Sheriff of Nottingham in a musical version of Robin Hood that featured songs by British composer and lyricist Laurence Mark Wythe at the Broadway Theater, Lewisham in London.[citation needed] He also appeared as the lawyer Dowling in a BBC Production of Henry Fielding's novel, The History of Tom Jones, A Foundling. In 2001 McCoy appeared in Paul Sellar's asylum comedy "The Dead Move Fast" at the Gilded Balloon as part of the Edinburgh Festival Fringe, playing the role of Doctor Mallinson. 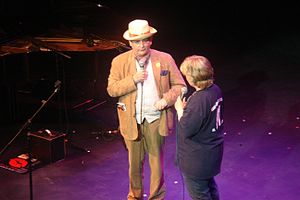 McCoy has appeared with the Royal Shakespeare Company in The Lion, the Witch, and the Wardrobe and in King Lear in 2007, playing the Fool to Ian McKellen's Lear,[11] a performance which made use of McCoy's ability to play the spoons. The RSC production with McKellen and McCoy was staged in Melbourne, Australia during late July/early August 2007 and Wellington and Auckland, New Zealand during mid to late August 2007. It came into residence at the New London Theatre in late 2007, ending its run in January 2008. He reprised the role for the 2008 television movie of the production.[citation needed]

In May 2008 he performed with the Carl Rosa Opera Company in a production of Gilbert and Sullivan's The Mikado, playing the title role. He only performed with the company briefly, for the week of the show's run performing at the Sheffield Lyceum. Despite being set in Japan, he was able to demonstrate his ability to play the spoons by using his fan. In 2009 McCoy played the character of Mr. Mushnik in the Chocolate Factory's production of Little Shop of Horrors.[12]

He has also made guest appearances in the television series The Bill, the Rab C. Nesbitt episode "Father" as Rab's mentally ill brother Gash Sr.[13] and the Still Game episode "Oot" (AKA "Out"), where he played a hermit-type character adjusting to life in modern Glasgow, having remained in his house for over 30 years. In October 2008, he had a minor guest role as an injured ventriloquist on Casualty. In the same month McCoy guest starred in an episode of the BBC soap opera Doctors, playing an actor who once played the time-travelling hero of a children's television series called "The Amazing Lollipop Man". The role was written as a tribute to McCoy.[14][15]

McCoy returned to the role of the Seventh Doctor in 1997, recording new audio for the video game Doctor Who: Destiny of the Doctors.

McCoy began filming for The Hobbit, a three-part adaptation of the book, in 2011. He portrays the wizard Radagast,[16] alongside fellow King Lear actor Ian McKellen who reprises his role as Gandalf.[17]

Although the character of Radagast is only alluded to in The Hobbit, and only a minor character in The Lord of the Rings, the part has been expanded for the films.