Symbols of France are emblems of the French nation, and are the cornerstone of the republican tradition.

The national emblems of the French Fifth Republic are:

The Flag of France is a tricolor, and consists in three vertical stripes of equal width, colored in royal blue, white, and red. It is the only official French emblem, according to article 2 of the current Constitution of France, adopted in 1958. 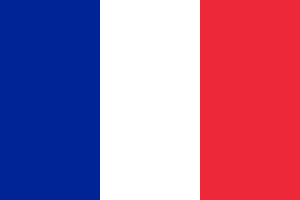 Marianne embodies the Republic. A personification of liberty and reason, and a portrayal of the Goddess of Liberty, her bust is present in every city hall in France. Her face is also drawn on stamps. The name Marianne enabled the French people to take over the newborn Republic, by creating a popular figure with whom French people could easily identify.

The Great Seal of France (French: Grand sceau de la République française) is the official seal of the French Republic. The Great Seal features Liberty personnified as a seated Juno wearing a crown with seven arches. She holds a fasces and is supported by a ship's tiller with a cock printed on it. At her feet is a vase with the letters "SU" ("Suffrage Universel", "Universal suffrage"). At her right, in the background, are symbols of the arts (painter's tools), architecture (Ionic order), education (burning lamp), agriculture (a sheaf of wheat) and industry (a cog wheel). The scene is surrounded by the legend "RÉPUBLIQUE FRANÇAISE, DÉMOCRATIQUE, UNE ET INDIVISIBLE" ("French Republic, democratic, one and indivisible") and "24 FEV.1848" (24 February 1848) at the bottom.

The reverse bears the words "AU NOM DU PEUPLE FRANÇAIS" ("In the name of the French people") surrounded by a crown of oak (symbol of perennity) and laurel (symbol of glory) leaves tied together with weed and grapes (agriculture and wealth), with the circular national motto "LIBERTÉ, ÉGALITÉ, FRATERNITÉ".

The current coat of arms of France has been a symbol of France since 1953. It appears on the cover of French passports and was adopted originally by the French Foreign Ministry as a symbol for use by diplomatic and consular missions in 1912 using a design by the sculptor Jules-Clément Chaplain.

The choice of the Gallic rooster as a symbol for France dates back to the collapse of the Roman Empire and the formation of Gaul. It finds its origin in a play on word on gallus (Latin for rooster) and Gallus (Gallic). Despite its frequent use as a symbol for France, in particular by sports federations, the rooster has never been an official emblem. “Cocorico !” (French for “cock-a-doodle-doo”) is often used as an affirmation of French patriotism, usually in an ironic manner.