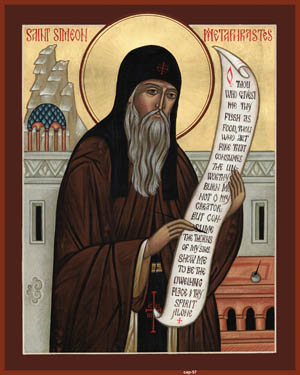 Symeon the Metaphrast (also referred to as Simon or Symeon the Logothete, in classicizing usage Symeon Metaphrastes) was the author of the 10 volume medieval Greek menologion, or collection of saint's lives. He lived in the second half of the 10th century. About his life we know only very few details.[1]

The Eastern Orthodox Church honours him as a saint, with his feast day falling on November 9. A service composed in his honour is found in the Menaion. Also numerous prayers which have been attributed to him are found in various Orthodox liturgical books.

Metaphrastes was the most renowned of the Byzantine hagiographers. Scholars have been very much divided as to the period in which he lived, dates ranging from the 9th century to the 14th having been suggested; but it is now generally agreed that he flourished in the second half of the 10th century.

Still greater divergences of opinion have existed as to the lives of saints coming from his pen, and here again the solution of the problem has been attained by studying the composition of the great Greek menologies. The Menalogion of Metaphrastes is a collection of lives of saints for the twelve months of the year, easily recognizable among analogous collections, and consisting of about 150 distinct pieces, some of which are taken from older collections, while others have been added later.[2]

Among other works attributed (though with some uncertainty) to Symeon are a Chronicle, a canonical collection, some letters and poems, and other writings of less importance. Symeon's great popularity is due more particularly to his Menologion.