From Infogalactic: the planetary knowledge core
(Redirected from Synaxarion)
Jump to: navigation, search 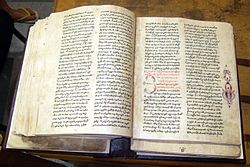 A Haysmavurk (Synaxarion) in Armenian restored and kept in Matenadaran

Synaxarion or Synexarion (pl. Synaxaria; Greek: Συναξάριον, from συνάγειν, synagein, "to bring together"; cf. etymology of synaxis and synagogue; Latin: Synaxarium, Synexarium) is the name given in the Eastern Orthodox, Oriental Orthodox and Eastern Catholic Churches to a compilation of hagiographies corresponding roughly to the martyrology of the Roman Church.

There are two kinds of synaxaria:[1]

The exact meaning of the name has changed at various times. Its first use was for the index to the Biblical and other lessons to be read in church. In this sense it corresponds to the Latin Capitulare and Comes. Then the Synaxarion was filled up with the whole text of the pericopes to be read. As far as the Holy Liturgy was concerned this meant that it was essentially transformed into the "Gospel" and "Apostle" books. Synaxarion remained the title for the index to the other lessons. Without changing its name it was filled up with complete texts of these lessons.[2] The mere index of such lessons is generally called menologion heortastikon, a book now hardly needed or used, since the Typikon supplies the same, as well as other, information.[2]

The oldest historical synaxaria apparently go back to the tenth century.[1] There are a great number of medieval Synaxaria extant in manuscript. They are important for Byzantine heortology and church history. The short lives that form the lessons were composed or collected by various writers.[2] Of these Symeon Metaphrastes is the most important. The accounts are of very varying historical value. Emperor Basil II (976-1025) ordered a revision of the Synaxarion, which forms an important element of the present official edition.[4] The Synaxarion is not now used as a separate book; it is incorporated in the Menaia. The account of the saint or feast is read in the Orthros after the sixth ode of the Canon. It is printed in its place here, and bears each time the name synaxarion as title. Synaxarion then in modern use means, not the whole collection, but each separate lesson in the Menaia and other books. An example of such a Synaxarion (for St. Martin I, 13 April) will be found in Nilles, op. cit., infra, I, xlix.[2]

During the Eastern Orthodox and Greek-Catholic Divine Services the reading of the synaxarion (in the sense of brief lives of the saints of the day) will take place after the Sixth Ode of the Canon at Matins or at the Divine Liturgy. The synaxaria may be printed in a separate volume or may be included with other liturgical texts such as the Menaion or Horologion.[citation needed]