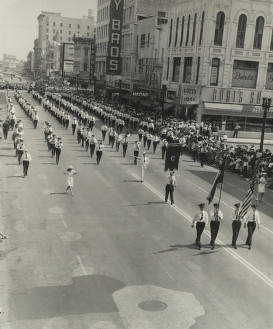 Firefighters marching in a parade

Synchronization is the coordination of events to operate a system in unison. The familiar conductor of an orchestra serves to keep the orchestra in time. Systems operating with all their parts in synchrony are said to be synchronous or in sync; those which are not are asynchronous.

Today, synchronization can occur on a global basis through the GPS-enabled timekeeping systems (and similar independent systems operated by the EU and Russia).

Time-keeping and synchronization of clocks was a critical problem in long-distance ocean navigation; accurate time is required in conjunction with astronomical observations to determine how far East or West a vessel has traveled. The invention of an accurate marine chronometer revolutionized marine navigation. By the end of the 19th century, time signals in the form of a signal gun, flag, or dropping time ball, were provided at important ports so that mariners could check their chronometers for error.

Synchronization was important in the operation of 19th century railways, these being the first major means of transport fast enough for the differences in local time between adjacent towns to be noticeable. Each line handled the problem by synchronizing all its stations to headquarters as a standard railroad time. In some territories, sharing of single railroad tracks was controlled by the timetable.[citation needed] The need for strict timekeeping led the companies to settle on one standard, and civil authorities eventually abandoned local mean solar time in favor of that standard.

In electrical engineering terms, for digital logic and data transfer, a synchronous circuit requires a clock signal. However, the use of the word "clock" in this sense is different from the typical sense of a clock as a device that keeps track of time-of-day; the clock signal simply signals the start and/or end of some time period, often very minute (measured in microseconds or nanoseconds), that has an arbitrary relationship to sidereal, solar, or lunar time, or to any other system of measurement of the passage of minutes, hours, and days.

In a different sense, electronic systems are sometimes synchronized to make events at points far apart appear simultaneous or near-simultaneous from a certain perspective. (Albert Einstein proved in 1905 in his first relativity paper that there actually are no such things as absolutely simultaneous events.) Timekeeping technologies such as the GPS satellites and Network Time Protocol (NTP) provide real-time access to a close approximation to the UTC timescale and are used for many terrestrial synchronization applications of this kind.

Synchronization is an important concept in the following fields:

Some systems may be only approximately synchronized, or plesiochronous. Some applications require that relative offsets between events be determined. For others, only the order of the event is important.