The Synod of Whitby (664 A.D.) was a Northumbrian synod where King Oswiu of Northumbria ruled that his kingdom would calculate Easter and observe the monastic tonsure according to the customs of Rome, rather than the customs practised by Irish monks at Iona and its satellite institutions. The synod was summoned at Hilda's double monastery of Streonshalh (Streanæshalch), later called Whitby Abbey. 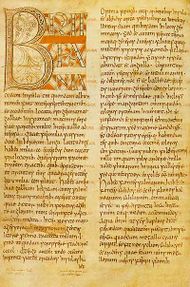 There are two principal sources for the synod. The first source, the Life of Wilfrid, is a hagiographic work written by Stephen of Ripon, often identified as Eddius Stephanus, probably soon after 710.[1] The second source is the Historia Ecclesiastica gentis Anglorum by the Venerable Bede, written in 731. One of Bede's sources was the Life of Wilfrid itself, but he also had access to people who knew participants in the synod. For example, Bede knew Acca of Hexham, and dedicated many of his theological works to him. Acca was a companion of Wilfrid's on some of his journeys to Rome.

Both accounts basically agree, though Bede gives a much lengthier discourse on the debate. The description of the proceedings, where King Oswiu presides and rules but does not engage in the ecclesiastics' debate himself, parallels examples of other synods in other sources, such as one in the Vita Sancti Bonifati by Willibald (where King Ine of Wessex performed the same function as Oswiu).[2] Nonetheless, it is important to observe that the authors, despite their relatively good access to sources concerning the synod, still wrote at a distance, and the accounts, especially the quotations attributed to the participants, are more likely to be summaries of how Bede and Stephen understood the issue rather than something like true quotations. Further, the motivations of the authors influenced how they presented the material. Bede placed his description of the event centrally in his narrative, and he has been recognised as overemphasising the historical significance of the synod because Easter calculation was of special interest to him, and also because he wished to stress the unity of the English Church.[3] However, Bede's accuracy as a historian has been well regarded by Anglo-Saxon scholars, and historians have generally been comfortable following Bede's basic presentation of the synod. Stephen's text has found more criticism, and Reginald Poole identified many of his inaccuracies, but Stephen's account of the synod did not suffer the same criticism as other passages in his work.[4]

Christianity in Britain during the seventh century existed in two forms distinguished by differing liturgical traditions, labelled the "Ionan" and "Roman" traditions. The "Ionan" practice was that of the Irish monks who resided in a monastery on the isle of Iona (a tradition within "Celtic Christianity"), whereas the "Roman" tradition kept observances according to the customs of Rome. In the kingdom of Northumbria, these two traditions coexisted, and each had been encouraged by different royal houses. Edwin of Northumbria had converted to Christianity under the influence of missionaries sent from Rome by Pope Gregory the Great and thus had established Roman practice in his realm. However, following his death and a year of political instability, Oswald of Northumbria gained the throne. He had learned Christian practice from the monks of Iona during his stay there (while a political exile in his youth), and had encouraged Ionan missionaries to further the Christianization of Northumbria, especially the famous Bishop Aidan.

One of the main differences between the two traditions, and hence a source of controversy, was the proper calculation of Easter. Early Christians had probably originally celebrated Easter concurrent with the Jewish Passover (see Passover, Christian holiday), which was held on the fourteenth day of the first lunar month of the Jewish year, called Nisan, the day of the crucifixion according to John 19:14. However, the First Council of Nicaea in 325 decreed that Christians should no longer use the Jewish calendar but universally adopt the practice of celebrating it on a Sunday, the day of the resurrection, as had come to be the custom in Rome and Alexandria.[5] Calculating the proper date (computus) was a complex process (involving a lunisolar calendar), and different calculation tables developed which resulted in different dates for the celebration of Easter.

In the 660s, Ionan adherents were still using a version of the 3rd-century Bishop Augustalis's 84-year cycle while Rome had since adopted the 532-year tables of Dionysius Exiguus which brought its celebration into full concord with Alexandria. The Ionan tables not only often resulted in a different date for the celebration of Easter, but they also allowed Easter to be celebrated on Nisan 14 if that were a Sunday, whereas Roman custom would have Easter moved to a different week in such a year (see ecclesiastical computus). Around 602, the Irish missionary St Columbanus had already been condemned by a synod of French clerics for following his homeland's Easter calculations. (The French followed yet a third computus, devised by Victorius of Aquitaine.) Columbanus's appeals to Pope Gregory I had gone unanswered and he had been compelled to remove himself from the bishops' jurisdiction. Both the Victorian and the Dionysian calculations were more exact than the native calendar, and a synod in southern Ireland had already adopted one of the new systems in the 630s. Political and ecclesiastical concerns over the authority to change longstanding traditions, however, could cloud the issue: the Welsh and French both resisted the change for another century.

The proper date of the celebration of the most significant Christian feast had already resulted in visible disunity in the Northumbrian court: Queen Eanfled of Bernicia and her court observed Easter on a different day than did King Oswiu. While one royal faction was celebrating Easter, the other would still be fasting during Lent. Nonetheless, the disunity did not result in problems as long as the well-respected Aidan was alive. After his death, his successor Finan found himself challenged by a monk named Ronan, an Irishman who had been trained in Rome and who wished to see the Roman Easter established. It was only in the time of Colmán, the third Ionan monk elected Bishop of Northumbria, that the conflict required royal attention and resolution.

An important figure in the convocation of the synod was Alchfrith, Oswiu's son and sub-king in Deira. Henry Mayr-Harting considered him the "chief cause of trouble which led to the Synod".[6] In the early 660s, he expelled Ionan monks from the monastery of Ripon and gave it to Wilfrid, a Northumbrian churchman who had recently returned from Rome. Alchfrith's position in the royal house, together with his promotion of Wilfrid (who would be the spokesperson for the Roman position at the synod), has contributed to the view that he was instrumental in arranging his father's convocation of the synod.[7]

The synod was held at a place called Streanæshalch, at a monastery of Hilda, herself a powerful Northumbrian noble and adherent to the Ionan Easter. The identification of the location with the place later called Whitby is generally accepted, but not absolutely certain. Another possible candidate is Strensall near York.[8]

The Ionan position was advocated by Colmán, Bishop of Northumbria. In support of the Roman position, Eanfled had sent her chaplain Romanus, and the position was also taken by Agilbert, a Frankish bishop who also held office in England. Because of Agilbert's inability to express the complicated arguments in Old English, which was for him a foreign language, Wilfrid was selected as the prime advocate for the Roman party. King Oswiu presided over the synod and acted as the final judge, who would give his royal authority in support of one side or the other.

Bishop Colmán argued the Ionan calculation of Easter on the grounds that it was the practice of Columba, founder of their monastic network and a saint of unquestionable holiness, who himself had followed the tradition of St. John the apostle and evangelist.

Wilfrid argued the Roman position on the following grounds (according to Bede's narrative):

Oswiu then asked both sides if they agreed that Peter had been given the keys to the kingdom of heaven by Christ and pronounced to be "the rock" on which the Church would be built, to which they agreed. Oswiu then declared his judgment in favour of the holder of the keys, i.e. the Roman (and Petrine) practice.

The Synod of Whitby established Roman practice as the norm in Northumbria, and thus "brought the Northumbrian church into the mainstream of Roman culture."[9] The episcopal seat of Northumbria was transferred from Lindisfarne to York. Wilfrid, chief advocate for the Roman position, later became Bishop of Northumbria, while Colmán and the Ionan supporters who did not change their practices withdrew to Iona. Colmán was allowed to take some relics of Aidan, who had been central in establishing Christianity of the Ionan tradition in Northumbria, with him back to Iona. To replace the departing ecclesiastics, Oswiu chose mostly Irishmen who were from the parts of Ireland that kept the Roman Easter (as most of Ireland had done for some time by the 660s).

If the focus regarding the Synod of Whitby is on the specific decisions made, then it was simply one of many councils held concerning the proper calculation of Easter throughout Latin Christendom in the Early Middle Ages.[10] It addressed the issue of Easter calculation and the proper monastic tonsure,[11] and concerned only the part of the English Church that answered to the See of Lindisfarne[11] – that is, it was a Northumbrian affair.[7] Wilfrid's advocation of the Roman Easter has been called, "a triumphant push against an open door", since most of the Irish had already accepted the Roman Easter and for this reason Iona "was already in danger of being pushed to one side by its Irish rivals".[12]

If the focus on Whitby is on the eventual consequences, then we might see the effects as more than just decisions on tonsure and dating of Easter, and instead see it as an important step in the eventual Romanisation of the church in England. This Romanisation might have occurred anyway without the Synod of Whitby. Nonetheless, following the Protestant Reformation, the events of the synod have been symbolically interpreted as a "Celtic Church" opposing a "Roman Church", and the decision of Oswiu was thus interpreted as the "subjugation" of the "British Church" to Rome. There is a debate regarding the reality of a pre-Whitby "Celtic" Church versus a post-Whitby "Roman" Church. (Until fairly recently, the Scottish Divinity Faculty course on Church History ran from the Acts of the Apostles to 664 before resuming in 1560.)[11] In the words of Patrick Wormald:

From the days of George Buchanan, supplying the initial propaganda for the makers of the Scottish Kirk, until a startlingly recent date, there was warrant for an anti-Roman, anti-episcopal and, in the nineteenth century, anti-establishment stance in the Columban or "Celtic" Church. ... The idea that there was a "Celtic Church" in something of a post-Reformation sense is still maddeningly ineradicable from the minds of students.[13]

Whatever might be the facts, to supporters, the symbology of a Celtic Church has importance post-Reformation.

In placing the synod in its proper historical context, Anglo-Saxon historians have also noted the position of the synod in the context of contemporary political tensions. Henry Mayr-Harting considered Alchfrith's interest in the convocation of the synod to be derived from his desire to see his father's position in Bernicia challenged and to see the replacement of Colmán with another bishop who would be more aligned with himself.[7]