Syria Mosque was a 3,700-seat [1] performance venue located in the Oakland neighborhood of Pittsburgh, Pennsylvania. Constructed in 1911 and dedicated on October 26, 1916,[2] the building was originally built as a "mystical" shrine for the Ancient Arabic Order of the Nobles of the Mystic Shrine (the Shriners) and designed by Huehl, Schmidt & Holmes architectural firm of Chicago.[3] It was recognized as one of the best examples of "exotic revival architecture".[4] 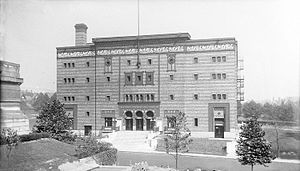 Photo of Syria Mosque taken ca 1913-1920 by Edward J. Shourek. The Syria Mosque was the birthplace of network television.[5]

Located at 4223 Bigelow Boulevard,[6] it held numerous events over the years, mainly highlighted by concerts of the Pittsburgh Symphony Orchestra and numerous internationally recognized music performers, as well as political rallies and speeches. Despite community efforts to have Syria Mosque designated a historic landmark, the building was demolished August 27, 1991.

Among the concert events:

Among the political events:

On January 11, 1949, from 8:30pm to 11pm EST, KDKA-TV (then WDTV and part of the DuMont Television Network) began its initial broadcast on its "network" centered in Pittsburgh. The program began with a one-hour local show broadcast from Syria Mosque, then finished with 90 minutes from ABC, CBS, NBC, and DuMont, featuring stars such as Arthur Godfrey, Milton Berle, DuMont host Ted Steele, and many other celebrities.[20] The station also represented a milestone in the television industry, providing the first "network" of a coaxial cable feed that included Pittsburgh and 13 other cities from Boston to St. Louis.[21]