The Syrian people (Arabic: الشعب السوري‎‎ / ALA-LC: al-sha‘ab al-Sūrī; Syriac: ܣܘܪܝܝܢ‎) are the inhabitants of Syria, and their ancestors who share a common Levantine Semitic ancestry. The term also refers to the citizens of Syria, regardless of ancestry, mother tongue, ethnic identity, or culture.

The cultural and linguistic heritage of the Syrian people is a blend of both indigenous elements and the foreign cultures that have come to rule the land and its people over the course of thousands of years.

The Syrian republic has a population of nearly 17 million as of 2014,[1] in addition to 4 million Syrian refugees. The dominant racial group is the Syrian descendants of the old indigenous peoples who mixed with Arabs and identify themselves as such in addition to ethnic Aramean. The country also includes the following ethnic minorities: Armenians, Assyrians, Circassians, Greeks, Kurds, and Turkmens.

The name "Syrians" was employed by the Greeks and Romans to denote the inhabitants of Syria; however, those inhabitants called themselves Arameans and Assyrians. The ethnic designation "Syrian" is derived from the word "Assyrian" and appeared in the Hellenistic and Roman periods. Some argue that the discovery of the Çineköy inscription in 2000 seems to support the theory that the term Syria derives from Assyria.

The Greeks used the terms "Syrian" and "Assyrian" interchangeably to indicate the indigenous Arameans, Assyrians and other inhabitants of the Near East, Herodotus considered "Syria" west of the Euphrates. Starting from the 2nd century BC onwards, ancient writers referred to the Seleucid ruler as the King of Syria or King of The Syrians.[3] The Seleucids designated the districts of Seleucis and Coele-Syria explicitly as Syria and ruled the Syrians as indigenous populations residing west of the Euphrates (Aramea) in contrast to Assyrians who had their native homeland in Mesopotamia east of the Euphrates.[4] However, the interchangeability between Assyrians and Syrians persisted during the Hellenistic period.[4]

The term Syrian was imposed upon Arameans of the modern-day Levant by the Romans. Pompey created the province of Syria, which included modern-day Lebanon and Syria west of the Euphrates, framing the province as a regional social category with civic implications.[6] Plutarch described the indigenous people of this newly created Roman province as "Syrians",[7] so did Strabo who observed that Syrians resided west of the Euphrates in Roman Syria,[6] and he explicitly mentions that those Syrians are the Arameans whom he calls Aramaei indicating an extant ethnicity.[8]

In his book The Great Roman-Jewish War, Josephus, a Hebrew native to the Levant, mentioned the Syrians as the non-Hebrew, non-Greek indigenous inhabitants of Syria.[9]

The Arabs called Syria and the Levant Al-Sham. The national and ethnic designation "Syrian" is one that has been reused, accepted, and espoused by the Syrian people since the advent of modern-day nationalism, which emanated from Europe and began with the culmination of the Napoleonic Wars of the early 1800s.

The inhabitants of Syria descend from the ancient Semitic peoples of antiquity,[10][11] mainly the Arameans and Phoenicians,[12][13][14][15][10] as well as from the pre-conquest, post-conquest Arabs of the 7th century AD. The majority of the Syrian people who refer to themselves as Arabs are the result of the linguistic Arabization of Syria following the Arab conquest of Syria.[16] 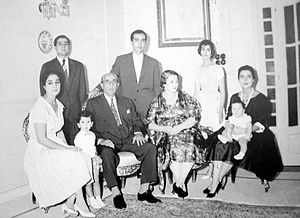 Syria started to get Arabised and Islamised in the seventh century, it took several centuries for Islam, the Arab identity, and language to spread.[17] Syrians welcomed the Arabs as liberators which made Arabisation and conversion faster.[18] The Arabs had a policy of segregating indigenous Syrians from the Arab tribes, they built new settlements to accommodate the new tribes which limited the ethnic assimilation of the original Arabised Arameans. Caliph Uthman ibn Affan specifically ordered his governor Muawiyah I to settle the new tribes away from the original population.[19] However the ascendancy of Arabic as the formal language of the state prompted the cultural and linguistic assimilation of Syrian converts.[20]

While the Umayyad caliphs showed religious tolerance, the Abbasids had a different approach,[21] and by the time of the Crusades (1100 AD) most Syrians adopted Islam and were culturally and linguistically fully Arabised.[22] The new Muslim converts mixed with the Arabs and shifted to an Arab racial identity although the mixing didn't change the genetic pool dramatically.[14]

The indigenous Aramean Christians who didn't keep their identity, adopted an Arab racial identity,[23] and became indistinguishable from the Arab Christians of pre-conquest era, while those who kept their racial characteristics maintained the Syrian identity and are mainly divided between two groups :

1- Followers of the Western Rite Syriac Orthodox Church and Syriac Catholic Church :[24][25] Those Aramaic Syriac-speaking Christians kept the Syrian (Syriac) Identity throughout the ages,[26] today most of them speak the Arabic language while retaining their racial identity. Syriac is still the liturgical language for most of the different Syriac churches in Syria.[27] More recently, the Syriac Orthodox Church, which has been historically called "Syrian", officially changed its English name to "Syriac" in 2000.[28]

2- The Western Aramaic Speaking Group : the inhabitants of Bakh'a, Jubb'adin and Ma'loula, retained their racial and linguistic characteristics,[29] whereas the residents of Bakh'a and Jubb'adin are Muslims.[30] In Ma'loula the Christian majority is split in between the Greek Orthodox Church of Antioch and the Melkite Greek Catholic Church, in addition to a Muslim minority.[31][32] Two notable Syrian Christian families in Ma'loula, include the Greek Orthodox Naddaf family and the Greek Catholic al-Ahmar family.[33]

Genetic tests on Syrians were included in many genetic studies,[14][15][34] the genetic marker which identifies descendants of the ancient Levantines is found among members of all Levantines from different religious groups.[35] Syrian Muslims show a slightly more Arabian genetic influx than their fellow Christians.[36] The most common Haplogroup is J represented by its subclades (branches) J1 and J2.

The paternal Y-DNA haplogroups J1 (which reaches it highest frequencies in Yemen 72.6% and Qatar 58.3%) accounted for 33.6% of Syrians.[15] J1 has its highest frequency in people belonging to the Ismailis of Damascus with 58.8%, while reaching its lowest frequency among the Arameans of Ma'loula with 6.8%. Other frequencies are 14.7% for Druze, 47.2% for Sunnis of Hama, 14.3% for Syriac Catholics of Saidnaya and 26.7% among the Alawites population.

The Syrian people cluster the closest with the Lebanese, then the Palestinians, Jews and then the Jordanians.[14][38]

Arabic is the mother tongue of some 90%[1] of Syrians as well as the official state language. The Syrian dialect, which belongs to the same Eastern Mediterranean-Levantine family tree of dialects, varies little from Modern Standard Arabic. The standardized form of Arabic, used in formal settings throughout the Arab world, contains the same vocabulary and grammar for all Arab countries. Kurdish, Armenian, Turkish, and Circassian are also spoken in Syria by their respective minority communities. A direct descendant of the Aramaic of Jesus, is still spoken in the ancient Christian village of Ma'loula by Muslim and Christian Arameans residents. Aramaic is further widely understood by Syrian-Christian communities — all of whom use Syriac as a liturgical language. English, and to a lesser extent French, is widely understood and used in interactions with tourists and other foreigners.

Main articles: Freedom of religion in Syria, Religion in Syria, Islam in Syria and Christianity in Syria
Clip - Interview with Paolo Dall'Oglio, The Syrian tradition of coexistence and the present scenario of confrontation

Religious differences in Syria have historically been tolerated,[39][40] and religious minorities tend to retain distinct cultural, and religious identities. Sunni Islam is the religion of 74% of Syrians. The Alawites, an ancient offshoot of Shia Islam that is distinct from Sunni Islam, make up 12% of the population and mostly live in and around Latakia. Christians make up 10% of the country. Most Syrian Christians adhere to the Byzantine liturgical rites, the two largest are the Greek Orthodox and the Greek Catholic churches.[41][42] The Druze are a mountainous people who reside in Jebel Druze who helped spark the Great Syrian Revolt. The Ismailis are an even smaller sect that originated in Asia. Many Armenian and Assyrian Christians fled Turkey during the Armenian Genocide and Assyrian Genocide and settled in Syria. The Kurds, although Sunni Muslim, are very secular and have a distinct language. The Circassians, are of North Caucasus origin and are mostly Sunni Muslim, following the Hanafi school of thought. The Circassians number about 100,000 and mostly live in northern Syria. The nomadic Bedouin lead a lifestyle that keeps them largely separated from the rest of society, herding sheep and moving through the desert, although some have settled in towns and villages. There are also roughly 500,000 Palestinians, who are mostly descendants of refugees from the 1948 Israeli-Arab War. The community of Syrian Jews inside Syria once numbered 30,000 in 1947, but has only 200 today.[43]

The Syrian people's beliefs and outlooks, similar to those of most Arabs and people of the wider Middle-East, are a mosaic of West and East. Conservative and liberally minded people will live right next to each other, and hold debates with each other. Like the other countries in the region, religion permeates life; the government registers every Syrian's religious affiliation.

Tabbouleh
For more details on this topic, see Syrian cuisine.

Syrian cuisine is dominated by ingredients native to the region. Olive oil, garlic, olives, peppermint, and sesame oil are some of the ingredients that are used in many traditional meals. Traditional Syrian dishes enjoyed by Syrians include, tabouleh, labaneh, shanklish, wara' 'enab, makdous, kebab, Kibbeh, sfiha, moutabal, hummus, mana'eesh, bameh, and fatoush.

Before the main courses, Syrians eat Maza, which is basically an appetizer. Maza is usually served with Arab-style tea - highly concentrated black tea, which is highly sweetened and served in small glass cups. Another popular drink, especially with Christians and non-practicing Muslims, is the Liquor Arak, which is produced from grapes or dates and flavored with aniseed, and can have an alcohol content of over 90% ABV (however, most commercial Syrian Arak brands are about 40-60% ABV). 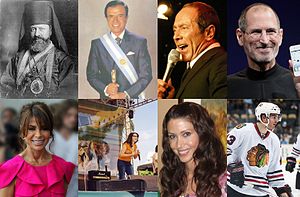