Szczecinek (Polish pronunciation: [ʂt͡ʂɛˈt͡ɕinɛk]; German: Neustettin; Kashubian: Nowé Sztetëno) is a city in Middle Pomerania, northwestern Poland with a population of more than 40,000 (2011). Formerly in the Koszalin Voivodeship (1950–1998), it has been the capital of Szczecinek County in the West Pomeranian Voivodeship since 1999. It is an important railroad junction, located along the main Poznań - Kolobrzeg line, which crosses less important lines to Chojnice, Słupsk and Runowo Pomorskie. The city boundaries were expanded in 2009 to include Świątki and Trzesieka, a total area of 48.63 km2 (18.78 sq mi).

In 1310, the castle and town were founded under Lübeck law by Duke Wartislaw IV of Pomerania-Wolgast and modelled after Szczecin (German: Stettin) which is situated about 150 km (93.21 mi) to the west. The initial name was "Neustettin" (Polish: Nowy Szczecin, German: Neustettin, Latin: Stetin Nova). It was also known as "Klein Stettin" (Polish: Mały Szczecin, German: Klein Stettin). In 1707 the town was known in Polish as Nowoszczecin, while the Mały Szczecin name gradually developed into the modern name Szczecinek.[1] The town was fortified to face the Brandenburgers, with a wall and palisades. In 1356 Neustettin was hit by the plague. Thankful for their survival, the Dukes Bogislaw V, Barnim IV and Wartislaw V founded the Augustine monastery Marienthron, on the Mönchsberg on the southern bank of Lake Streizigsee. Under the Duke Wartislaw VII Neustettin, from 1376 to 1395 it was the seat of his Duchy. Afterwards, it was ruled by Pomeranian Duchy: Rügenwalde (-1418), Wolgast (-1474) and Stettin (until 1618).

On 15 September 1423, the "great day of Neustettin", the Pomeranian dukes, the Hochmeister of the Teutonic Order and Nordic king Eric VII of Denmark met to discuss defense against the union of Brandenburg and Poland. In 1461 Neustettin was sacked, looted and burned by Polish troops and Tatars because King Casimir IV wanted to take revenge on Eric II of Pomerania-Wolgast who supported the Teutonic Knights.

At the end of the Thirty Years War, Neustettin became part of Brandenburg, and in 1701 under the crown of Prussia. In 1945, the Red Army occupied the town and put it under Polish administration.

A dangerously low flight was performed by a Polish Su-22 in the town on 6 August 2012; this incident is under investigation.[2] 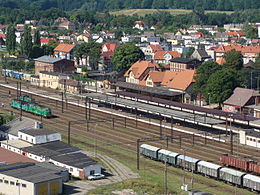