Tønder (German: Tondern) is a town in the Region of Southern Denmark. With a population of 7,595 (as of 1 January 2014),[1] it is the main town and the administrative seat of the Tønder Municipality.

The first mention of Tønder might have been in the mid-12th century, when the Arab geographer Muhammad al-Idrisi mentioned the landmark Tu(r)ndira, which might have been a reference to either Tønder, or the nearby town of Møgeltønder.

Tønder was granted port privileges by the Hanseatic League in 1243, making it Denmark's oldest privileged market town. In 1532 it was hit by severe floods, with water levels reaching 1.8 m in St Laurent's church, 5.3 m above sea level. In the 1550s, Tønder's port lost direct access to the sea due to dykes being built to the west of town at the direction of Duke Hans the Elder of Schleswig-Holstein-Haderslev, the son of Frederick I of Denmark.

The town center is dominated by houses from the late 17th and early 18th century, when the town experienced rapid growth as a result of its lace industry. Prior to 1864, Tønder was situated in the Duchy of Schleswig, so its history is intertwined with the contentious history of Schleswig-Holstein. In the 1920s, when the Schleswig Plebiscite incorporated Northern Schleswig into Denmark, 76.5% of Tønder's inhabitants voted to remain part of Germany and 23.5% voted to join Denmark.[2]

During World War I, a Zeppelin base was operated in Tønder by the Imperial German Navy. The base was attacked by the British on 19 July 1918, in what is known as the Tondern raid. Seven Sopwith Camels from the aircraft carrier HMS Furious bombed the base, hitting two of the three airship hangars. The Zeppelins L.54 and L.60 inside one hangar were destroyed and a balloon inside the other was damaged. After this, Tønder was abandoned as an active airship base, and was used only as an emergency landing site. A wartime aircraft hangar survives, as do some of the ancillary buildings, but only the foundations remain of the large airship hangars. The site now houses a museum, named the Zeppelin and Garrison Museum Tønder.[3]

After the First World War, Tønder was detached from Germany in spite of the majority of its population casting a pro-German vote in the Schleswig Plebiscites - as Tønder was included in Zone I, which as a whole had a strong pro-Danish majority. In the years that followed, German political parties enjoyed a majority in the city council, and until 1945, the city was officially bilingual.

After the end of the German occupation of Denmark, the political influence of the German population dwindled considerably. In spite of the improvement in cross-border traffic, the location of the town continued to hamper industrial growth through the late 20th century, although some companies did set up businesses. Tourism has grown in importance. In 1989, a teacher training college opened its doors. 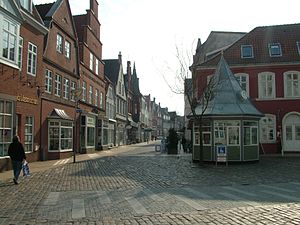 Every August, the Tønder Festival offers visitors a wide variety of traditional and modern folk music. The Scouts of Tønder are twinned with Hemyock, in Devon, England, and make exchange trips between the countries every few years.