On 2 September 2005, Moseley assumed his final Air Force assignment as Chief of Staff of the Air Force— the senior uniformed Air Force officer responsible for the organization, training and equipage of more than 700,000 active-duty, Guard, Reserve and civilian forces serving in the United States and overseas. As a member of the Joint Chiefs of Staff, the general and other service chiefs function as military advisers to the Secretary of Defense, National Security Council, and the President.

Moseley resigned from the Air Force at the request of U.S. Secretary of Defense Robert Gates in June 2008 in the wake of a number of Air Force scandals, including a 2007 scandal related to the Air Force's handling of the security of nuclear weapons at Minot Air Force Base. On 11 July 2008, a formal retirement ceremony was held for General Moseley; he officially retired from the Air Force on 11 August 2008.

Moseley was born in 1949 in Grand Prairie, Texas. He graduated from Texas A&M University in 1971 with a Bachelor of Arts degree in Political Science. He earned a Master of Arts degree from Texas A&M University in 1972, also in political science. He commanded the F-15 Division of the Air Force Fighter Weapons School at Nellis AFB, Nevada, the 33rd Operations Group at Eglin AFB, Florida, and the 57th Wing, the Air Force's largest, most diverse flying wing, also at Nellis. The general has served as the combat Director of Operations for Joint Task Force-Southwest Asia. General Moseley also commanded 9th Air Force and U.S. Central Command Air Forces while serving as Combined Forces Air Component Commander for Operations in Operation Southern Watch, Operation Enduring Freedom and Operation Iraqi Freedom. The general is a member of the Council on Foreign Relations. He has been awarded the Order of National Merit (Officer) and the Order of National Merit (Commander) by the president of the French Republic. The Order of National Merit is the second highest French military award. He has also been awarded the United Arab Emirates' Military Medal, 1st Class, by the president of the U.A.E.

Moseley's staff assignments have been a mix of operational, joint and personnel duties. These include serving in Washington, D.C., as Director for Legislative Liaison for the Secretary of the Air Force; Deputy Director for Politico-Military Affairs for Asia/Pacific and Middle East, the Joint Chiefs of Staff; Chief of the Air Force General Officer Matters Office; Chief of Staff of the Air Force Chair and Professor of Joint and Combined Warfare at the National War College; and Chief of the Tactical Fighter Branch, Tactical Forces Division, Directorate of Plans, Headquarters U.S. Air Force.

Moseley assumed the position of Chief of Staff of the Air Force during a ceremony at Andrews Air Force Base on September 2, 2005.

Moseley personally "adopted" the United States Air Force Academy Class of 2009 as his own, and has gone out of his way to address the future leaders of the U.S. Air Force. On March 8, 2007, the Grand Prairie ISD school board unanimously voted to name an elementary school opening in the 2007–2008 school year Mike Moseley Elementary School in honor of his achievements and as a native of Grand Prairie.

As a result of a series of high-profile scandals and his resistance to the new drone programs,[1] Moseley, along with the Secretary of the Air Force, was forced to resign[2]—his resignation coming on 5 June 2008 in the wake of a report that criticized the service's handling of nuclear weapons security related to the 2007 United States Air Force nuclear weapons incident and a misshipment of nuclear missile components to Taiwan.[3][4] Following his resignation, Moseley continued to serve as Chief of Staff of the Air Force until his official retirement ceremony at Bolling AFB, Washington, D.C. on 11 July 2008.[5] (See 2007 United States Air Force nuclear weapons incident)

On 11 July 2008, Moseley had his formal retirement ceremony at Bolling Air Force Base in Washington, D.C. Former Secretary of the Air Force, the Honorable Michael Wynne presided over the ceremony. Moseley officially retired from the Air Force on August 1, 2008.

Members of the United States Air Force were under investigation by the FBI for having awarded a $50 million contract for audio-visual presentation services to Strategic Message Solutions (SMS) of Plymouth Meeting, Pennsylvania.[6][7] The contract involved the "Thundervision" project, meant to provide oversized video screens and perhaps content services during air shows that featured the Air Force Thunderbirds. The investigation revolves around possible involvement of former Chief of Staff of the Air Force Gen. (ret.) John P. Jumper, and Chief of Staff of the Air Force T. Michael Moseley. It is suggested that the contract price was inflated, because a friend of the two generals, Air Force General (ret.) Hal Hornburg, was associated with Strategic Message Solutions. Two companies involved in the bidding process protested award of the contract in January 2006, one having offered comparable services for half as much. The Air Force cancelled the contract in February 2006.[8]

In July 2009 the DoD IG concluded that Moseley violated Federal rules and regulations by helping steer the Thunderbirds promotion contract to SMS. The investigation found that Moseley gave SMS personal access to his office and direct access to USAF resources before the contract bid, including personnel and equipment. The IG also concluded Moseley improperly solicited and accepted gratuities from the owner of SMS, including arranging for a friend to fly in the owner's vintage fighter plane and accepting dinner and an overnight stay at the SMS owner's home.[9] In October 2009, former Secretary of the Air Force Michael Donley issued Retired General Moseley a "Letter of Admonishment in Retirement" for his actions.[10] 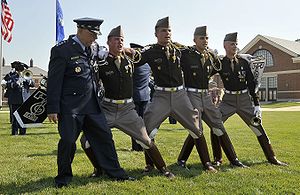 General Moseley at his retirement ceremony with cadets from his alma mater, Texas A&M University

Moseley has called for the retirement of the Fairchild Republic A-10 Thunderbolt II, comparing it to the North American P-51 Mustang which had been quickly retired after the Second World War and then even more quickly pressed back into active service at the start of the Korea War.[15]