TAG Heuer S.A. (English pronunciation: /ˌtæɡ ˈhɔɪ.ər/ TAG HOY-ər) is a Swiss manufacturing company that designs, manufactures and markets watches and fashion accessories as well as eyewear and mobile phones manufactured under license by other companies and carrying the Tag Heuer brand name.

TAG Heuer began as Uhrenmanufaktur Heuer AG, founded in 1860 by Edouard Heuer in St-Imier, Switzerland. In 1985 TAG Group purchased a majority stake in the company, forming TAG Heuer.[1] In 1999 French luxury goods conglomerate LVMH made a friendly takeover offer and bought out nearly 100 percent of the Swiss company.[1]

The name TAG Heuer combines an abbreviation for Techniques d'Avant Garde and the founder's surname Heuer. 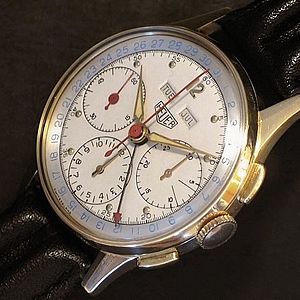 Edouard Heuer patented his first chronograph in 1882 and in 1887 patented an 'oscillating pinion' still used by major watchmakers of mechanical chronographs.[2][3]

In 1911, Heuer received a patent for the "Time of Trip", the first dashboard chronograph. Designed for use in automobiles and aircraft, two large hands mounted from the center pinion indicate the time of day, as on a traditional clock. A small pair of hands, mounted at the top of the dial (12 o'clock position) indicates the duration of the trip (up to 12 hours). A top-mounted crown allows the user to set the time; a button mounted in that crown operates the start / stop / reset functions of the "duration of trip" counter.

Heuer introduced its first wrist chronograph in 1914. The crown was at the 12 o'clock position, as these first wrist chronographs were adapted from pocket chronographs. In 1916, Heuer introduced the "Micrograph", the first stopwatch accurate to 1/100 of a second. This model was soon followed by the "Semikrograph", a stopwatch that offered 1/50 of a second timing, as well as a split-second function (which allows the user to determine the interval between two contestants or events).

In 1933, Heuer introduced the "Autavia", a dashboard timer used for automobiles and aviation (whence its name, from "AUTos" and "AVIAtion"). The companion "Hervue" was a clock that could run for eight days without being wound. Over the period from 1935 through the early 1940s, Heuer manufactured chronographs for pilots in the Luftwaffe, known as "Flieger" (pilots) chronographs. The earlier version featured a hinged-back case and one pusher (for start / stop / reset); the later version had a snap-back case and added a second pusher (for time-in and time-out). All these Flieger chronographs had two-registers, with a capacity of 30 minutes.".[4]

In the mid-1940s, Heuer expanded its line of chronographs to include both two- and three-register models, as well as a three-register chronograph that included a full calendar function (day / date / month). As the highest development of Heuer's chronographs, these "triple calendar" chronographs were offered in stainless steel, 14 carat gold 18 and 22 carat gold cases. Dial colors were white, black or copper.

In the early 1950s, Heuer produced watches for the American retailer Abercrombie & Fitch. The "Seafarer" and "Auto-Graph" were unique chronographs produced by Heuer to be sold by Abercrombie & Fitch. The "Seafarers" had special dials—with blue, green and yellow patterns—that showed the high and low tides. This dial could also be used to track the phases of the moon. Heuer produced a version of the "Seafarer" for sale under the Heuer name, with this model called the "Mareographe". The "Auto-Graph" was produced in 1953 and 1954, and featured a tachymeter scale on the dial and a hand that could be preset to a specific point on the scale. This allowed a rally driver or navigator to determine whether the car was achieving the desired pace, over a measured mile. Advertisements and literature also pointed out that this hand could be rotated to count golf scores or other events.[5]

From 1911, Heuer manufactured timepieces to be mounted on the dashboards of automobiles, aircraft and boats. These clocks and timers included a variety of models, designed to address specific needs of racers and rallyists. In 1958, Heuer introduced a new line of dashboard timepieces, which included the Master Time (8-day clock), the Monte Carlo (12-hour stopwatch), the Super Autavia (full chronograph), Sebring (60-minute, split-second timer) and Auto-Rallye (60-minute stopwatch). Heuer continued to manufacture these dashboard timepieces into the 1980s, at which time they were discontinued. Heuer also introduced timing devices for ski and motor racing events, including Formula One. 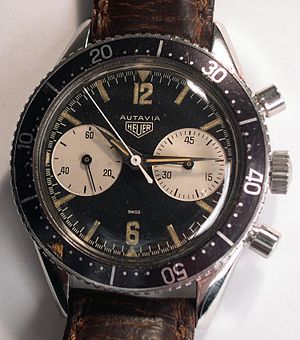 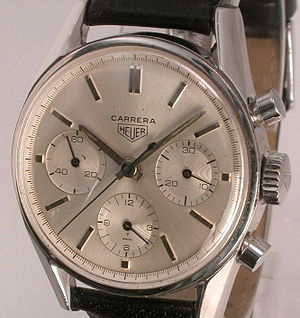 From the 1950s to the 1970s, Heuers were popular watches among automobile racers, both professionals and amateurs.[6] Heuer was a leading producer of stopwatches and timing equipment, based on the volume of its sales, so it was only natural that racers, their crews and event sponsors began to wear Heuer's chronographs. Special versions of Heuer chronographs were produced with logos of the Indianapolis Motor Speedway, as well as the names or logos of racing teams or sponsors (for example, Shelby Cobra, MG and Champion Sparkplugs).[7]

In 1962, Heuer became the first Swiss watchmaker in space. John Glenn wore a Heuer stopwatch when he piloted the Mercury Atlas 6 spacecraft on the first US manned space flight to orbit the earth.[8] This stopwatch was the back-up clock for the mission and was started manually by Glenn 20 seconds into the flight. It is currently on display at the San Diego Air and Space Museum.

The Autavia chronograph was introduced in 1962 and featured a rotating bezel, marked in either hours, minutes, decimal minutes (1/100th minute increments) or with a tachymeter scale. All manual-wind Autavias from the 1960s had a black dial, with white registers. Early cases had a screw-back and later models (from and after 1968) had snap-backs. The "Autavia" name had previously been used on Heuer's dashboard timers (described above).

The Carrera chronograph, designed by Jack Heuer, was introduced in 1963. The Carrera had a very simple design, with only the registers and applied markers on the dial. The fixed inner bezel is divided into 1/5 second increments. The 1960s Carreras were available with a variety of dials, including all-white, all-black, white registers on a black dial, and black registers on a black dial. A three-register, triple calendar version of the Carrera was introduced around 1968.

Heuer acquired the "Leonidas" brand in the early 1960s, with the combined company marketing watches under the "Heuer-Leonidas" name. One of the designs that Heuer acquired from Leonidas was the "Bundeswehr" chronograph, used by the German air force. These "BWs" feature a 'fly-back' mechanism, so that when the chronograph is reset to zero, it immediately begins running again, to time the next segment or event.

In the mid-1960s, Heuer partnered with Breitling and Hamilton (and in competition with Seiko and Zenith) to introduce an automatic chronograph. These projects were conducted in secret, as none of the competitors wanted the other companies to be aware of their efforts. Heuer-Breitling-Hamilton held press conferences in Geneva and New York, on 3 March 1969 to show their new lines of chronographs.[9] 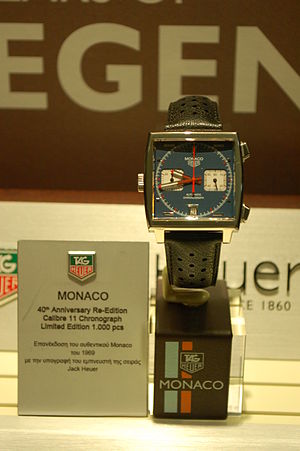 The Heuer Monaco 40th Anniversary re-edition with Calibre 11 (2009) is a limited edition, contemporary replica of the original 1969 Heuer Monaco.

In the mid-1970s, Heuer introduced a series of chronographs powered by the Lemania 5100 movement. The Lemania 5100 movements have the minute hand for the chronograph on the center pinion (rather than on a smaller register), greatly improving legibility. The Lemania 5100 movement is considered very rugged and has been used in a variety of chronographs issued to military pilots. There are ten models of Heuer chronographs powered by the Lemania 5100—Reference 510.500 (stainless steel), 510.501 (black coated), 510.502 (olive drab coated), 510.503 (pewter coated), 510.511 (Carrera dialed acrylic crystal PVD finish), 510.523 (Carrera dialed acrylic crystal stainless steel), as well as models with the names Silverstone (steel case with black dial) and Cortina (steel case with blue dial); the Reference 510.543 was made for the A.M.I. (Italian Air Force) and a special edition (with no reference number marked on the case) was made for AudiSport.[10]

TAG Heuer formed in 1985 when TAG (Techniques d'Avant Garde), manufacturers of high-tech items such as ceramic turbochargers for Formula One cars, acquired Heuer.

In 2010, TAG Heuer introduced the 'Pendulum Concept', the first magnetic oscillator without hairspring capable of providing restoring torque comparable to that of hairspring.

In 2013, TAG Heuer celebrated the 50th anniversary of the Carrera, the racing-inspired Chronograph that is a key part of the TAG Heuer range today. There have been 10 generations of Carrera since its introduction, with models launched in every decade since 1963.[12] 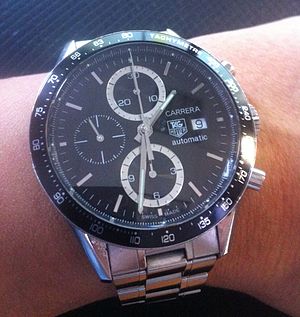 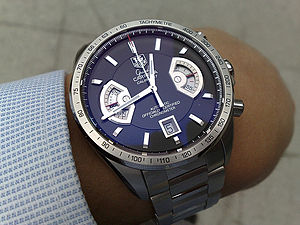 TAG Heuer, in keeping with its image as a luxury brand with an innovative spirit, has long standing links with the world of sport and Hollywood. TAG Heuer has been the official timekeeper of the three Summer Olympic Games of the 1920s,[3] the Skiing World Championships, the Formula One World Championships and has developed a watch for the McLaren F1 team.[13] The brand has also had a long list of sports and Hollywood ambassadors.[14]

Some of the more recently announced models include the Monaco V4 (the movement of which is driven by belts rather than gears);[15] the Carrera Calibre 360 (the first mechanical wrist chronograph to measure and display time to 1/100 of a second[16]) and the Monaco 69 (with both a digital chronograph accurate to a millisecond and a traditional mechanical movement, with a hinged mechanism allowing wearers to flip the watch between its two separate dials).[17]

London-based Christoph Behling has been the lead designer for TAG Heuer since 2004. The collaboration has resulted in some of the brand's most celebrated pieces including the world's fastest chronograph, the Mikrogirder 1/2000th, launched in 2012.[1]

Many TAG Heuer watches feature chronographs. In January 2011 TAG Heuer announced the new Carrera Mikrograph,[18] the first TAG Heuer to use the in-house Mikrograph movement, which is accurate to 1/100 of a second. Additionally, TAG Heuer has also released the limited edition Carrera MP4-12C to commemorate the launch of the McLaren MP4-12C supercar. TAG Heuer has been a partner of the McLaren F1 team for over 26 years.[19]

At the Basel 2011 show in March 2011, TAG Heuer announced the Mikrotimer Flying 1000, a concept mechanical watch capable of accuracy of 1/1000 of a second – ten times faster than the Mikrograph.[20]

Steve McQueen wore a blue Monaco in the 1971 movie Le Mans (this model is now referred to as the "McQueen Monaco"),[27] and Swiss Formula One star Jo Siffert customarily wore a white-dialed Autavia with black registers. In 1974, HeueRichardsonr produced a special version of the black-dialed Autavia that was offered by the Viceroy cigarette company for $88. This version of the Autavia was called the "Viceroy" and advertisements for this promotion featured racer Parnelli Jones.[28]

Starting in 2016, the Red Bull Racing Formula One team will run Renault engines branded as TAG Heuer, and TAG Heuer sponsorship will appear on the car near the engine.[29]

In 2007, TAG Heuer won the iF product design award[30] for its Monaco Calibre 360 LS Concept Chronograph. The award was given away by the International Forum Design Hannover GmbH, held in Hanover, Germany. The watch received the award in the Leisure/Lifestyle category. It was chosen among more than 2,200 timepieces presented by watchmakers from 35 countries. TAG Heuer received the iF product design award for the second time in two years. In 2006, another TAG Heuer watch, entitled Professional Golf Watch, won in the same Leisure/Lifestyle category. The design of the Professional Golf Watch was developed with Tiger Woods.[31]