From Infogalactic: the planetary knowledge core
(Redirected from TSS/360)
Jump to: navigation, search 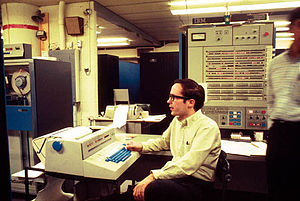 The IBM Time Sharing System TSS/360 was an early time-sharing operating system designed exclusively for a special model of the System/360 line of mainframes, the Model 67. Made available on a trial basis to a limited set of customers in 1967, it was never officially released as a supported product by IBM. TSS pioneered a number of novel features, some of which later appeared in more popular systems such as Multics and VM/CMS. TSS was migrated to System/370 and 303x systems, but despite its many advances and novel capabilities, TSS failed to meet expectations and was eventually canceled.

TSS/360 was one of the first implementations of tightly-coupled symmetric multiprocessing. A pair of Model 67 mainframes shared a common physical memory space, and ran a single copy of the kernel (and application) code. An I/O operation launched by one processor could end and cause an interrupt in the other. The Model 67 used a standard 360 instruction called Test and Set to implement locks on code critical sections.

TSS/360 included an early implementation of a "Table Driven Scheduler" — a user-configured table whose columns were parameters such as current priority, working set size, and number of timeslices used to date. The kernel would refer to this table when calculating the new priority of a thread. This later appeared in systems as diverse as Honeywell CP-V and IBM z/OS.

As was standard with operating system software at the time, TSS/360 customers (such as General Motors Research Laboratories) were given full access to the entire source of the operating system code and development tools. User-developed improvements and patches were frequently incorporated into the official source code.

TSS/360 suffered from performance and reliability problems and lack of compatibility with OS/360, although those issues were eventually addressed. IBM attempted to develop TSS on a very aggressive schedule with a large staff of programmers to compete with Multics. By 1967, it had become evident that TSS/360 was suffering from the same kinds of delays as OS/360. In February 1968, at the time of SHARE 30, there were eighteen S/360-67 sites attempting to run TSS. During the conference, IBM announced via "blue letter" that TSS/360 was being decommitted — a great blow to the time-sharing community. This decision was temporarily reversed, and TSS/360 was not officially canceled until 1971. However, TSS/360 continued to be quietly available for a time to existing TSS/360 customers, as an interim measure.

After TSS/360 was canceled, IBM put its primary efforts into the Time Sharing Option (TSO), a time-sharing monitor for OS/360. Several other groups developed less ambitious, more successful time sharing systems for the S/360-67, notably CP-67 at IBM's Cambridge Scientific Center, an early virtual machine monitor which evolved into VM/370, MTS at the University of Michigan, and ORVYL at Stanford University. IBM also provided the TSS/370 PRPQ as a migration path for existing TSS/360 customers, which went through multiple releases.

TSS provides users a command-line interface.[2] Users interact with the command system. The command format consists of Command_Name[ operands]. The command name is one to eight characters without imbedded blanks. The operands are optional depending on the command, and must be separated from the command name by at least one blank. Multiple operands should be separated by TAB characters or commas. Command lines can be continued by typing a hyphen ("-") at the end of the line to be continued and typing the continuation at the beginning of the next line. Multiple commands can be written on a line by separating them with semicolons (";"). Comments are allowed in command lines, separated from the command with a semicolon and included in single quotes ("'"). Operands can be either positional or keyword, with the format "keyword=value".

TSS provided an early implementation of "position-independent code", the ability to have different processes run a single copy of an executable possibly mapped to a different virtual addresses in each process.

System/360 programs typically contain modifiable data (working storage) and "address constants" or "adcons" (fields containing the addresses of code or data). In TSS virtual addresses differ for each process running that program. TSS language processors place all adcons and working storage into a separate section of code called a Prototype Control Section, or "PSECT". When the program is loaded the dynamic loader makes a copy of the PSECT and relocates the adcons to reflect the virtual addresses assigned within the current process, therefore each user of the program has a unique copy of the PSECT. When a called program is executed general register 13 contains the address of the PSECT for the current process; this address is used for all references to variable data or addresses.[3][4]