The modern copy of the Tabula Rogeriana, upside-down with North oriented up.

The Nuzhat al-mushtāq fi'khtirāq al-āfāq (Arabic: نزهة المشتاق في اختراق الآفاق‎‎, lit. "the book of pleasant journeys into faraway lands"), most often known as the Tabula Rogeriana (lit. "The Book of Roger" in Latin), is a description of the world and world map created by the Arab geographer, Muhammad al-Idrisi, in 1154. Al-Idrisi worked on the commentaries and illustrations of the map for fifteen years at the court of the Norman King Roger II of Sicily, who commissioned the work around 1138.[1][2]

The book, written in Arabic, is divided into seven climate zones (in keeping with the established Ptolemaic system), each of which is sub-divided into ten sections, and contains maps showing the Eurasian continent in its entirety, but only the northern part of the African continent. The map is oriented with the North at the bottom. It remained the most accurate world map for the next three centuries.[2][3] The text incorporates exhaustive descriptions of the physical, cultural, political and socioeconomic conditions of each region and each of the seventy sections has a corresponding map.[2][4]

To produce the work al-Idrisi interviewed experienced travelers individually and in groups on their knowledge of the world and compiled "only that part... on which there was complete agreement and seemed credible, excluding what was contradictory."[1] Roger II had his map engraved on a silver disc weighing about 300 pounds.[1] It showed, in al-Idrisi's words, "the seven climatic regions, with their respective countries and districts, coasts and lands, gulfs and seas, watercourses and river mouths."[1]

The foremost geographer of this period was Abu ‘Abd Allah Muhammad al-Idrisi. He settled in Palermo, Sicily at the tolerant and enlightened court of the Norman king Roger II of Sicily, where he was charged with the production of a book on geography. It was to contain all available data on the location and climate of the world’s main centers of population. King Roger himself enthusiastically interviewed travelers passing through his kingdom, and agents and draftsmen were dispatched to gather material—a research process that took some 15 years. In 1154, just a few weeks before the king died, al-Idrisi’s book was finally complete. 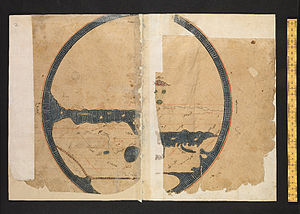 Written in Arabic and Latin and accompanied by maps, it presented the world as a sphere. It calculated the circumference to be 37,000 kilometres (22,900 mi) — an error of less than 10 percent — and it hinted at the concept of gravity. Following the classical Greek tradition, al-Idrisi had divided the world into seven climate zones and described each in turn, supported by 70 longitudinal section maps which, when put together, made a rectangular map of the known world. This was complemented by a smaller, circular world map in which the south was drawn at the top and Arabia, being the site of Makkah, was depicted centrally. Al-Idrisi’s book came to be known as Kitab Rujar (Roger’s Book) and the circular world map was engraved onto a silver tablet. Sadly, both the book and the silver map appear to have been destroyed during civil unrest shortly afterward, in 1160. Thus our understanding today of al-Idrisi’s conclusions is based on an abbreviated version of a second book that he wrote for Roger’s son, William II. Manuscripts of this so-called “Little Idrisi” are held today in a handful of European libraries."[5]

On the work of al-Idrisi, S. P. Scott commented:

"The compilation of Edrisi marks an era in the history of science. Not only is its historical information most interesting and valuable, but its descriptions of many parts of the earth are still authoritative. For three centuries geographers copied his maps without alteration. The relative position of the lakes which form the Nile, as delineated in his work, does not differ greatly from that established by Baker and Stanley more than seven hundred years afterwards, and their number is the same. The mechanical genius of the author was not inferior to his erudition. The celestial and terrestrial planisphere of silver which he constructed for his royal patron was nearly six feet in diameter, and weighed four hundred and fifty pounds; upon the one side the zodiac and the constellations, upon the other-divided for convenience into segments-the bodies of land and water, with the respective situations of the various countries, were engraved."[3]

Ten manuscript copies of the Book of Roger currently survive, five of which have complete text and eight of which have maps.[2] Two are in the Bibliothèque nationale de France, including the oldest, dated to about 1325. (MS Arabe 2221). Another copy, made in Cairo in 1553, is in the Bodleian Library in Oxford (Mss. Pococke 375). It was acquired in 1692.[6] The most complete manuscript, which includes the world map and all seventy sectional maps, is kept in Istanbul.[4]