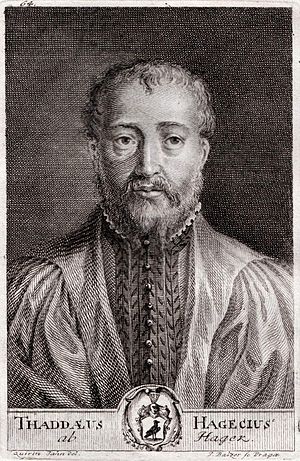 Tadeáš Hájek was the son of Šimon Hájek (ca. 1485–1551) from an old Prague family. He was ennobled in 1554 by Ferdinand I of Germany, knighted in 1571 by Maximilian II, later made knight of the Holy Roman Empire by Rudolf II. He had three wives, three sons and one daughter.

In 1548–1549, he studied medicine and astronomy in Vienna and graduated in 1550, receiving his Masters "in artibus" in 1551. In 1554 he studied medicine in Bologna and went to Milan the same year to listen to lectures by Girolamo Cardano, but he soon returned to Prague, where he became a professor of mathematics at the Charles University of Prague in 1555.

He published the Aphorismi Metoposcopici in 1561, dealing with divination and diagnosis by interpreting moles on one's body. He triangulated the area around Prague and co-authored a map of it in 1563; the map is unfortunately lost now. In 1564 he received the Emperor's privilege stating that no astrological prognostication could be printed in Prague before he had seen and approved it. In 1566–1570, he served as an army doctor in Austria and Hungary during the war with the Ottoman Empire. He published his studies of a supernova in the constellation Cassiopeia in 1572. Tadeáš Hájek was in frequent scientific correspondence with the recognized astronomer Tycho Brahe (1546–1601) and played an important role in persuading Rudolph II to invite Brahe (and later Kepler) to Prague.

His voluminous writings in Latin were mostly concerned with astronomy and many regarded him as the greatest astronomer of his time. Besides his work, Tadeáš Hájek eagerly collected manuscripts, especially those by Copernicus.

Throughout his life he also published numerous astrological prognostics in Czech language and that is why he was until recently viewed as an "occultist" rather than a great scientist. He corresponded with John Dee as a result of their common interest in Euclid and geometry.

The lunar crater Hagecius and the asteroid 1995 Hajek are named in his honour.