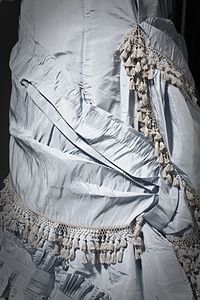 Taffeta (/ˈtæfᵻtə/; archaically spelled taffety) is a crisp, smooth, plain woven fabric made from silk or cuprammonium rayons. The word is Persian in origin and means "twisted woven." It is considered to be a "high-end" fabric, suitable for use in ball gowns, wedding dresses, and interiors for curtains or wallcovering. It is also widely used in the manufacture of corsets and corsetry: it yields a more starched-like type of cloth that holds its shape better than many other fabrics. An extremely thin, crisp type of taffeta is called paper taffeta.[1][2]

Modern taffeta was first woven in Italy and France and until the 1950s in Japan. Warp-printed taffeta or chiné, mainly made in France from the eighteenth century onwards, is sometimes called "pompadour taffeta" after Madame de Pompadour.[4] Today most raw silk taffeta is produced in India and Pakistan. Initially, handlooms were widely used, but since the 1990s it has been produced on mechanical looms in the Bangalore area. From the 1970s until the 1990s, the Jiangsu province of China produced fine silk taffetas: these were less flexible than those from Indian mills, however, which continue to dominate production. Other countries in Southeast Asia and the Middle East also produce silk taffeta, but these products are not yet equal in quality or competitiveness to those from India. The most deluxe taffetas, however, are still woven in France, Italy, Russia, and the United Kingdom.[citation needed]

Taffeta has seen use for purposes other than clothing fabric, including the following: