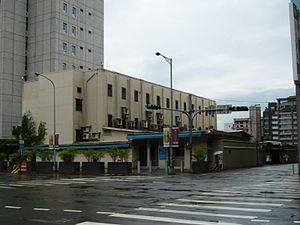 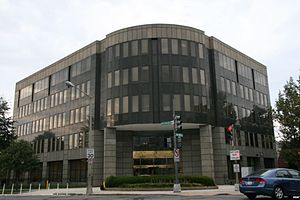 In 1867, during the Rover incident Taiwanese aborigines attacked shipwrecked American sailors, killing the entire crew. They subsequently skirmished against and defeated a retaliatory expedition by the American military and killed another American during the battle.

In October 1945, the representatives of Chiang Kai-shek were sent to Taiwan to accept the surrender of Japanese troops. However, during the period of the 1940s, there was no recognition by the United States Government that Taiwan had ever been incorporated into Chinese national territory.[1] Chiang continued to remain suspicious of the American motives.[2]

At the height of the Sino-Soviet Split, and at the start of the reform and opening of People's Republic of China, the United States strategically switched diplomatic recognition from the Republic of China (ROC) to the People's Republic of China (PRC) on January 1, 1979 to counter the political influences and military threats from the Soviet Union. The US Embassy in Taipei was 'migrated' to Beijing and the Taiwanese Embassy in the US was closed. Following the termination of diplomatic relations, the United States terminated its Mutual Defense Treaty with Taiwan on January 1, 1980.

On April 10, 1979, U.S. President Jimmy Carter signed into law the Taiwan Relations Act (TRA), which created domestic legal authority for the conduct of unofficial relations with Taiwan. U.S. commercial, cultural, and other interaction with the people on Taiwan is facilitated through the American Institute in Taiwan (AIT), a private nonprofit corporation. The Institute has its headquarters in the Washington, DC area and has offices in Taipei and Kaohsiung. It is authorized to issue visas, accept passport applications, and provide assistance to U.S. citizens in Taiwan. A counterpart organization, the Taipei Economic and Cultural Representative Office in the United States (TECRO), has been established by the ROC. It has its headquarters in Taipei, the representative branch office in Washington, DC, and 11 other Taipei Economic and Cultural Offices (TECO) in the continental U.S. and Guam. The Taiwan Relations Act (TRA) continues to provide the legal basis for the unofficial relationship between the U.S. and Taiwan, and enshrines the U.S. commitment to assisting Taiwan maintain its defensive capability.

After de-recognition, the U.S. still maintain unofficial diplomatic relations with ROC through Taipei Economic and Cultural Representative Office; the current head of TECRO in Washington, D.C. is Shen Lyu-shun. The American Institute in Taiwan, a non-profit institute headquarters in the US soil under the laws of the District of Columbia in Arlington County, Virginia and serves as the semi-official, working-level US representation and AIT has branch offices in Taipei and Kaohsiung. The Chairman of AIT is Raymond Burghardt. Christopher J. Marut was appointed to be the new AIT Taipei Office Director in August 2012.[3][4] With the absence of diplomatic recognition, in the present state, US-ROC relations are formally guided by the service of enactment of Taiwan Relations Act by US Congress for the continuation of US-ROC relations after 1979. In 2013, Taiwan Policy Act of 2013 was raised and passed in House Committee on Foreign Affairs by the US Congress to update the condition of US-Taiwan relations.[5][6]

U.S. commercial ties with Taiwan have been maintained and have expanded since 1979. Taiwan continues to enjoy Export-Import Bank financing, Overseas Private Investment Corporation guarantees, normal trade relations (NTR) status, and ready access to U.S. markets. In recent years, AIT commercial dealings with Taiwan have focused on expanding market access for American goods and services. AIT has been engaged in a series of trade discussions, which have focused on protection of intellectual property rights and market access for U.S. goods and services.

On December 16, 2015, the Barack Obama administration announced that a deal to sell $1.83 billion worth of arms to the ROC Armed Forces, a year and eight months after U.S. Congress passed the Taiwan Relations Act Affirmation and Naval Vessel Transfer Act of 2014 to allow the sale of Oliver Hazard Perry-class frigates to Taiwan. The deal would include the sale of two decommissioned U.S. Navy frigates, anti-tank missiles, Assault Amphibious Vehicles, and FIM-92 Stinger surface-to-air missiles, amid the territorial disputes in the South China Sea.[7][8] China's foreign ministry had expressed its disapproval for the sales and issued the U.S. a "stern warning", saying it would hurt China–U.S. relations.[9]

Despite friendly relations with China, United States President George W. Bush was asked on April 25, 2001, "if Taiwan were attacked by China, do we (The U.S.) have an obligation to defend the Taiwanese?" He responded, "Yes, we do...and the Chinese must understand that. The United States would do whatever it took to help Taiwan defend herself."[17] He made it understood that "though we (China and the U.S.) have common interests, the Chinese must understand that there will be some areas where we disagree." [18]

On June 19, 2013, ROC Ministry of Foreign Affairs expressed gratitude for a US Congress's bill in support of Taiwan's bid to participate in the International Civil Aviation Organization (ICAO).[19] On July 12, 2013, US President Barack Obama signed into law H.R. 1151, codifying the US government’s full support for Taiwan’s participation in the ICAO as a non-sovereign entity.[20] The United States has continued the sale of appropriate defensive military equipment to Taiwan in accordance with the Taiwan Relations Act, which provides for such sales and which declares that peace and stability in the area are in U.S. interests. Sales of defensive military equipment are also consistent with the 1982 U.S.-P.R.C. Joint Communiqué.

Maintaining diplomatic relations with the PRC has been recognized to be in the long-term interest of the United States by seven consecutive administrations; however, maintaining strong, unofficial relations with Taiwan is also a major U.S. goal, in line with its desire to further peace and stability in Asia. In keeping with its China policy, the U.S. does not support de jure Taiwan independence, but it does support Taiwan's membership in appropriate international organizations, such as the World Trade Organization, Asia-Pacific Economic Cooperation (APEC) forum, and the Asian Development Bank, where statehood is not a requirement for membership. In addition, the U.S. supports appropriate opportunities for Taiwan's voice to be heard in organizations where its membership is not possible.

On August 24, 2010, the United States State Department announced a change to commercial sales of military equipment in place of the previous foreign military sales in the hope of avoiding political implications.[21] However pressure from the PRC has continued and it seems unlikely that Taiwan will be provided with advanced submarines or jet fighters.[22]

Taiwan has indicated that it is willing to host national missile defense radars to be tied into the American system, but is unwilling to pay for any further cost overruns in the systems.[23]

Taiwan has denied that they are providing American military secrets to the PRC.[24]

This article incorporates public domain material from websites or documents of the United States Department of State (Background Notes).