From Infogalactic: the planetary knowledge core
Jump to: navigation, search
For other uses, see Takeda clan (disambiguation).
In this Japanese name, the family name is Takeda.

The Takeda clan (武田氏, Takeda-shi?) is a Japanese clan active from the late Heian Period (794 – 1185). The clan was historically based in Kai Province in present-day Yamanashi Prefecture.[1][2]

In the 12th century, at the end of the Heian period, the Takeda family controlled Kai Province. Along with a number of other families, they aided their cousin Minamoto no Yoritomo against the Taira clan in the Genpei War. When Minamoto no Yoritomo was first defeated at Ishibashiyama (1181), Takeda Nobuyoshi was applied for help and the Takeda sent an army of 20,000 men to support Yoritomo. Takeda Nobumitsu (1162–1248), helped the Hōjō during the Shokyu War (1221) and in reward received the governorship of Aki Province. Until the Sengoku period, the Takeda were shugo of Kai, Aki and Wakasa provinces.

Immediately prior to the Sengoku period, the Takeda helped to suppress the Rebellion of Uesugi Zenshū (1416 – 1417).[3] Uesugi Zenshū (? – 1417) was the kanrei chief advisor to Ashikaga Mochiuji, an enemy of the central Ashikaga shogunate and the Kantō kubō governor-general of the Kantō Region. Mochiuji, lord of the Uesugi clan, made a reprisal against the Takeda clan in 1415. This reprisal began a rivalry between the Uesugi and Takeda clans which would last roughly 150 years until the destruction of the Takeda clan at the end of the Sengoku period.[4]

Takeda Harunobu (1467 – 1568) succeeded his father Nobutora in 1540 and became shugo lord of Kai Province in present-day Yamanashi Prefecture. In this period the Takeda began to quickly expand from their base in Kai Province. In 1559, Harunobu changed his name to the better-known Takeda Shingen. He faced the Hōjō clan a number of times, and most of his expansion was to the north, where he fought his most famous battles against Uesugi Kenshin. This series of regional skirmishes is known as the Battles of Kawanakajima. The battles began in 1553, and the best known and severest among them was fought on September 10, 1561.[5]

Shingen is famous for his tactical genius, and innovations, though some historians have argued that his tactics were not particularly impressive nor revolutionary. Nevertheless, Shingen is perhaps most famous for his use of the cavalry charge. Up until the mid-16th century and Shingen's rise to power, mounted samurai were primarily archers. There was already a trend at this time towards larger infantry-based armies, including a large number of foot archers. In order to defeat these missile troops, Shingen transformed his samurai from archers to lancers. Shingen used the cavalry charge to devastating effect at the Battle of Mikatagahara in 1572. The strength of Shingen's new tactic became so famous that the Takeda army came to be known as the kiba gundan (騎馬軍団), or 'mounted army.'

Decline of the Takeda clan 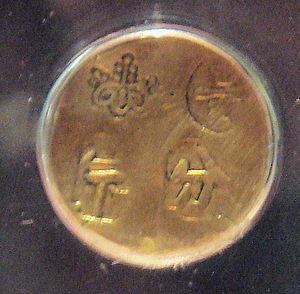 Gold coin of the Takeda clan of Kōshū (甲州金) in the 16th century, an early example of Japanese currency.

Shingen died in on May 13 1573 at age 53 from illness.[6][5] his son Takeda Katsuyori (1546 – 1582) effectively succeeded Shingen though the nominal head of the family was his grandson Takeda Nobukatsu, Katsuyori continued Shigen's aggressive expansion plan south and westward and was initially successful, briefly achieving the largest extent of Takeda rule, however he was defeated in the Battle of Nagashino in 1575 by Oda Nobunaga and Tokugawa Ieyasu.

After Nagashino, the Takeda clan fell into sharp decline as it had lost many of its most notable samurai during the battle. Katsuyori's position within the clan also became precarious (as he did not fully inherit the clan leadership position); in 1582, two of his relatives defected to the Oda/Tokugawa alliance and Nobunaga succeeded in destroying the Takeda clan shortly thereafter. The campaign saw most of the Takeda followers simply abandoning Katsuyori and the other Takeda family members to their fate. The clan was effectively eliminated, although descendants of the Takeda clan would take prominent positions in the Tokugawa shogunate, established in 1603.[5]

Takeda is also a fairly common family name in modern Japan, though it is unlikely that everyone with the Takeda name is descended from this noble house (several divisions of the family have the Takeda name). 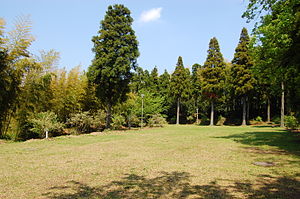 Site of Mariyatsu Castle, base of the Kazusa Takeda clan, Kisarazu, Chiba Prefecture

The Aki Takeda clan, established in Aki Province in the present-day western part of Hiroshima Prefecture.[1]

The Wakasa Takeda clan was established in Wakasa Province in present-day southern Fukui Prefecture in approximately 1440. The Wakasa were an offshoot of the Aki Takeda clan.[1] The Wakasa Takeda were known for their patronage of the arts and developing the Takeda school of military etiquette.[2]

The Kazusa Takeda clan, established at the beginning of the Sengoku period in Kazusa Province in the present-day central area of Chiba Prefecture. Along with the Satomi clan of Awa Province in the southern part of present-day Chiba Prefecture the two clan replaced the dominance of the Chiba clan in the region. The Kazusa Takeda are also known as the Mariyatsu Takeda, a reference to their base of power, Mariyatsu Castle.[1]

The Kōshū Hatto, composed at some point in the 15th century, is the code of law of the Takeda family, while the Kōyō Gunkan, composed largely by Kōsaka Masanobu in the mid-16th century, is an epic poem recording the family's history and Shingen's innovations in military tactics.

Important members of the Takeda family

Takeda is a playable faction in Shogun 2.

Takeda is a playable nation in Europa Universalis IV.