In 2002 Sato graduated to Formula One with the Honda-powered Jordan team, and was paired with Giancarlo Fisichella. His low point was a tremendous crash in Austria, caused when Nick Heidfeld lost control of his Sauber under braking and hit the side of Sato's car, punching a hole in the side of the cockpit.[1] Throughout he showed flashes of speed but also wild driving, nevertheless the team's faith in Sato was repaid by a fine drive to fifth at his home Grand Prix in Suzuka. 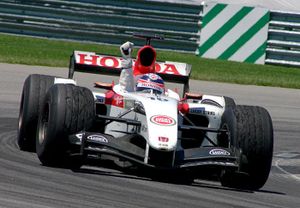 Sato celebrates his only Formula One podium finish, at the 2004 United States Grand Prix.

With Honda's focus shifting solely to British American Racing for 2003 Sato joined the Brackley-based outfit as a test driver. For the final round in Japan Sato replaced Jacques Villeneuve and scored the second points finish of his career with sixth, despite a collision with Michael Schumacher. He was signed to race full-time in 2004. His season was blighted by numerous engine failures, suffering no less than six. In spite of this Sato's aggressive driving style paid dividends at the United States Grand Prix, after the team did not pit under safety car conditions Sato fought back with some daring overtaking moves to score his first podium finish, the first for a Japanese driver since Aguri Suzuki at the 1990 Japanese Grand Prix. He finished eighth in the championship with 34 points and helped the team to second in the Constructors' championship.

Sato was retained by BAR-Honda for the 2005 season, but the 2005 car was not as close to the front of the pack as the previous year's design. Sato missed the Malaysian Grand Prix with illness, and both drivers were disqualified from the San Marino Grand Prix and the entire team banned from the two subsequent races for using cars which were underweight when all fuel was removed. The Court did not find that this was deliberate. Sato's season never recovered from that point, after a crash-strewn season which included being disqualified from the Japanese Grand Prix for an overly-ambitious move on Jarno Trulli, Sato was not re-signed for 2006, despite Honda taking full control of the team.

Sato joined the new Super Aguri F1 team for 2006, run by former Japanese driver Aguri Suzuki. The new outfit was in effect a Honda B-team but ran the first half of the season with a modified version of a 2002 Arrows A23 chassis. Nevertheless, Sato's reputation improved thanks to his professional attitude and competitive spirit. The team introduced a new car, the SA06 at the German Grand Prix and by the end of the season Sato was outpacing the Midland cars. At the season finale in Brazil Sato finished tenth just two places short of a points finish and comfortably ahead of both Toro Rossos and the Spyker MF1s.

For 2007, Super Aguri ran a reword version of the previous year's Honda RA106 chassis. Their performance improved drastically as Sato made it through to Q3 at the Australian Grand Prix. He then scored the first point for the team at the Spanish Grand Prix. At the Canadian Grand Prix, Sato finished sixth after having a race that had seen him move from the middle of the grid to a high of fifth, passing Ferrari's Kimi Räikkönen before a pit-stop error dropped him back to eleventh. He moved up five places in the last 15 laps, passing Toyota's Ralf Schumacher and then on lap 67 the McLaren-Mercedes of world champion Fernando Alonso; the latter pass was met with cheers around the track.[2] 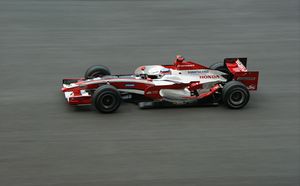 Sato at the 2008 Malaysian Grand Prix.

Financial problems began to affect the team in the off-season winter break and the Japanese squad only just made it to the opening round of the 2008 season in Australia. The team used a modified Honda RA107 chassis, which was launched just before the first Friday Practice session that weekend. The car was just as uncompetitive as the Honda had been in 2007 and the team withdrew from Formula One after the Spanish Grand Prix.

In late 2008, Sato took part in tests at Jerez with Scuderia Toro Rosso, to become a candidate to fill the seat vacated by Sebastian Vettel. He was competing against former Toro Rosso driver Sébastien Bourdais and Red Bull Racing test and reserve driver Sébastien Buemi for one of the two race seats.[3] He first drove on 18 September, more than four months since Super Aguri's withdrawal, and tested for the team again for two days in November, setting the fastest time on the 17th,[4] 3 tenths ahead of Buemi, and proceeded by setting the second-fastest time on the 18th.[5]

Bourdais eventually won the race seat and in March 2009 it was announced that Sato would not be the reserve driver for the Red Bull team.[6] 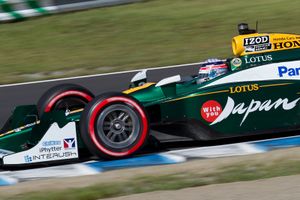 At the 2012 Indianapolis 500, driving for Rahal Letterman Lanigan Racing, Sato chased Dario Franchitti to the finish making a move for the lead and the race win at the first turn of the last lap. While not successful, Sato was respected by Indianapolis 500 fans for "going for it" on the last lap.

For 2013, Sato joined A. J. Foyt's team, driving the No. 14 car vacated by Mike Conway. In the third race of the season at Long Beach, Sato scored his first IndyCar win, in his 52nd start in the series, making him the first Japanese driver to win an IndyCar race.[9]

On 14 June 2012, Mugen Motorsports announced that Sato would race with Team Mugen in the last 2 rounds, as well as the JAF Grand Prix, at Sportsland SUGO, Suzuka Circuit and Fuji Speedway of the 2012 Formula Nippon season.[10]

On 20 November 2013, Sato became a test driver for the FIA Formula E Championship.[11] On 11 September 2014, Sato joined his former Formula One team Amlin Aguri to compete in Formula E, starting with the season-opening Beijing ePrix.[12] In the race, Sato set the fastest lap with a time of 1:45.101, but was not classified, despite finishing the race four laps down.[13]

Sato is married and has two children with his wife, Chiharu.[14]