Talgarth is a small market town , community and Wards and electoral divisions of the United Kingdom in southern Powys, mid Wales, with a population of 1,645,[2] increasing to 1,724 at the 2011 Census. Notable buildings in the town include its 14th-century parish church and 13th-century Pele Tower,[3] located in the town centre, now home to the Tourist Information and Resource Centre. According to traditional accounts Talgarth was the capital of the early medieval Welsh Kingdom of Brycheiniog.

The church of Talgarth is recorded in 1488 as dedicated to Sce Wenne Virginis, explained as Gwen (granddaughter of Brychan), said to have been murdered by the Saxons.

In August, the Talgarth Festival of the Black Mountains is held, a popular event attracting thousands of people each year. The town also has an annual Christmas lights display, organised by Talgarth Town Council and a team of volunteers. 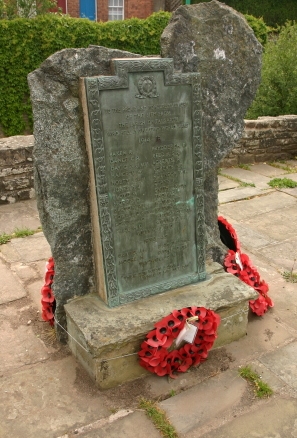 Talgarth held important links with healthcare for many years as the home of the large psychiatric hospital, the Mid Wales Hospital and the Mid and West Wales College of Nursing and Midwifery. The town was extremely prosperous until the 1980s when changes in health legislation saw the need for such hospitals to be closed. The Mid Wales Hospital closed for good in the 1990s with the loss of hundreds of jobs. Since then the town has suffered socially and economically and as a result lost businesses and shops and confidence among residents: effects similar to those experienced in the South Wales Valleys mining towns.[citation needed]

The Romans were in this area and there was a Roman camp at "Y Gaer" near Pendre, 1 km from Talgarth.

Talgarth was the royal residence of Brychan King of Brycheiniog in the 5th century AD. With three wives, 24 daughters and 22 sons the family was an important force in Wales at that time. Responsible for the spread of Christianity throughout Brecknock, the daughters of Brychan and their descendants account for almost all of the Saints of South Wales and include the grandmother of Saint David.[citation needed]

The town was seized by the Norman Bernard of Neufmarché before 1088 when a charter was made concerning the district. Castell Dinas was the initial site where a Norman castle was established by the Normans to control the passes on both sides.[5]

The town was in the manor of English Talgarth, there being also a manor of Welsh Talgarth, in which Welsh laws prevailed.[citation needed]

In 1735 Talgarth saw the birth of the Welsh Methodist revival when Hywel Harris, probably the most influential person to come from Talgarth, was converted in Talgarth church while listening to a sermon by the Rev. Pryce Davies. The revival would sweep across Wales leading to the development of one of the most influential Welsh denominations, that of the Calvinistic Methodists. It was at Talgarth that William Williams Pantycelyn converted, leading him to become one of Wales's, most important hymn writers. Nearby is Trevecca the location of the famous college that Harris established. Talgrath is also thought to be the birthplace of the religious poet Jane Cave.[6]

Buildings and other sites of note

A Neolithic chambered tomb at Penywyrlod, Talgarth (c. 4000 BC) was discovered in June 1972 by a farmer when clearing a stone mound from a field for use as hard-standing in the farmyard. The discovery led to archaeological excavation of the site by Dr Savory of the National Museum of Wales. During the excavation a number of human remains were found along with a bone flute, a human rib and some worked flints and stone. The bone flute was made from a sheep metapodial bone. It has three holes and may either have been a simple flute or whistle.[7] The larger hole may have been the blow-hole. This is the oldest dated musical instrument found from Wales.

The Black Mountains Gliding Club is based on the hillside to the southeast of the town. It attracts many visitors from all of the UK, due to the year-round ability to remain airborne by means of mountain lift, both ridge lift and wave lift.[8][9]

There are a number of riding operators in the area who hire out horses for both experienced and novice riders. The mountains and moorland are very suitable for relaxed ascents with some opportunities to canter and gallop on the commons near the town.

The Black Mountains above the town are very good for upland hiking and hill-walking. The mountain ridges are around 2000 feet high with the highest point called Waun Fach at 811 metres (2,660 feet). A walking festival based on the town and its hinterland was established in 2013. The event attracts visitors at the start of May each year.[10] 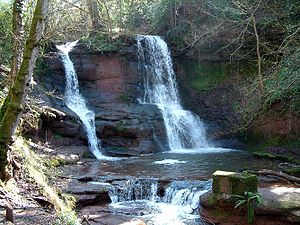 There is an ancient woodland along the banks of the River Ennig just 1 km from the town centre. There are a series of waterfalls within the wood. The largest is called Pwll-y-wrach, which means[11] 'Witches Pool'. Local legend suggests that witches may have been ducked in this pool in medieval times. There is a geology trail, explaining the environment of 400 million years ago. A large part of Pwllwrach wood is a nature reserve, owned and managed by the Brecknock Wildlife Trust.

Pwll-y-wrach wood is designated a Site of Special Scientific Interest (SSI) because of its special habitat values and the existence of some quite rare plants, including the small-leaved lime tree and the lesser butterfly-orchid. These are regarded as indicator plants of Ancient Woodland. That is an area that has retained a continuous cover of trees for thousands of years.

The fossil remains of ancient armoured fishes have been found in rocks within the late Silurian/early Devonian-age Lower Old Red Sandstone rocks exposed in local streamsides. Microscopic analysis has found fish scales and fin spines of these ancient fish some 410 million years old. The research carried out by a local man, Roderick Williams. The remains were then sent to Australia to a fossil fish expert Dr Sue Turner for photographing and finally a scientific paper was published on these findings. Within the area of Talgarth the geology requires more long term research as a rare spider like fossil was found at Tredomen quarry and remains of very ancient plants from the same age rocks.

There is evidence of volcanic activity in the formation of air fall tuffs in the layers of rocks, blown out from a distant volcano. The nature of these tuffs infer an explosive type of eruption from volcanoes sited on the edge of a continental subduction zone. The whole area was probably tectonically unstable at the time.

There is some barytes present in rocks at Pwll-y-Wrach. There is a small source of lead ore at the Gospel Pass in the uppermost reaches of the River Honddu where strings of galena were found circa 1800. There was also an unsuccessful trial mine for copper at Felin Fach nearer Brecon in the 17th century. Some rather interesting ore mixture was found. There was further exploration in the 19th century when speculation was running high; a fallen-in shaft and tunnel still exists. Copper in the form of small green patches of malachite has been found in rocks at the base of a large mountain gully above Velindre. It is not known if this was exploited but the area has been referred to as the 'copper works' in a manuscript on beating the boundary of Llanigon parish.

Limestone in the form of 'calcrete' within the local sandstone rocks has been burnt for lime in many places across the Black Mountains for both lime mortar and agricultural uses.

Some years ago a local man interested in geology (R. B. Williams) had found a thick tuff bed (20 cm or so thick) in the banks of the River Ennig not far above Penbont Bridge in the vicinity of Talgarth. It was instantly recognised as probably being part of the so-called Townsend Tuff Bed which has three distinct beds or layers in close proximity. Known as layers A,B and C. A is the lowest bed and is recognised by coprolites on its upper surface; these may be the droppings of a some unidentified crustacean. The finder had seen these beds at Cusop and Merbach Hill (Herefordshire) and are widely known throughout the Old Red Sandstone of the Anglo Welsh area by geologists. Recently concern was shown that this bed middle bed was at risk from the building of Talgarth's flood defences in the upper River Ennig. The British Geological Survey team was contacted by the finder tuff bed B and they were very interested in its location because recently the BGS (2011) had been working on the same rocks on the Epynt hills (artillery range). On visiting they decided that this thick tuff bed at Penbont was probably Bed B. Mr Williams then showed them another known tuff bed which had been found by another local geologist Mr Hawley placed at 'The Rocks' Talgarth just upstream of the mill. This was instantly recognised as Bed A. Bed C has yet to be found but the two geologists from the BGS are now considering resurveying the geology of Talgarth.

In spring the wood is carpeted with a succession of wildflowers leading to a mass display of bluebells in mid-spring followed by ramsons in late spring. Animals found in the wood include tawny owls, badgers, foxes and otters with some uncommon birds such as dippers and pied flycatchers.

The wood is also home to the most important colony of dormouse in the region and some uncommon bats, including the lesser horseshoe bat.

A number of films and dramas have been filmed in and around Talgarth, notably On the Black Hill. Others include Morgan's Boy (BBC) a rare drama, now unavailable, Nuts and Bolts (ITV), where scenes were shot at the old Hospital and Hearts of Gold (ITV), where the town was assumed to be Pontypridd.