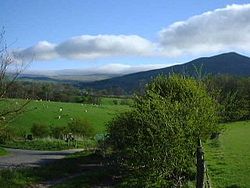 The Eden Valley between Appleby and Penrith, an area referred to affectionately as the heartland of Rheged in the praise poems of Taliesin.
For other uses, see Taliesin (disambiguation).

Taliesin (fl. 6th century; (/ˌtæliˈɛsᵻn/; Welsh pronunciation: [talˈjɛsɪn]) was an early Brythonic poet of Sub-Roman Britain whose work has possibly survived in a Middle Welsh manuscript, the Book of Taliesin. Taliesin was a renowned bard who is believed to have sung at the courts of at least three Brythonic kings.

Eleven of the preserved poems have been dated to as early as the 6th century, and were ascribed to the historical Taliesin.[1] The bulk of this work praises King Urien of Rheged and his son Owain mab Urien, although several of the poems indicate that he also served as the court bard to King Brochfael Ysgithrog of Powys and his successor Cynan Garwyn, either before or during his time at Urien's court. Some of the events to which the poems refer, such as the Battle of Arfderydd (c. 573), are referred to in other sources.

His name, spelled as Taliessin in Alfred, Lord Tennyson's Idylls of the King and in some subsequent works, means "shining brow" in Middle Welsh.[2] In legend and medieval Welsh poetry, he is often referred to as Taliesin Ben Beirdd ("Taliesin, Chief of Bards" or chief of poets). He is mentioned as one of the five British poets of renown, along with Talhaearn Tad Awen ("Talhaearn Father of the Muse"), Aneirin, Blwchfardd, and Cian Gwenith Gwawd ("Cian Wheat of Song"), in the Historia Brittonum, and is also mentioned in the collection of poems known as Y Gododdin. Taliesin was highly regarded in the mid-12th century as the supposed author of a great number of romantic legends.[2]

According to legend Taliesin was adopted as a child by Elffin, the son of Gwyddno Garanhir, and prophesied the death of Maelgwn Gwynedd from the Yellow Plague. In later stories he became a mythic hero, companion of Bran the Blessed and King Arthur. His legendary biography is found in several late renderings (see below), the earliest surviving narrative being found in a manuscript chronicle of world history written by Elis Gruffydd in the 16th century.

Details of Taliesin's life are sparse. The first mention of him occurs in the Saxon genealogies appended to four manuscripts of the Historia Brittonum. The writer names five poets, among them Taliesin, who lived in the time of Ida of Bernicia (fl. mid-6th century AD) and a British chieftain, Dutigirn.[3]

This information is considered fairly credible,[4] since he is also mentioned by Aneirin, another of the five mentioned poets, who is famed as the author of Y Gododdin, a series of elegies to the men of the kingdom of Gododdin (now Lothian) who died fighting the Angles of at the Battle of Catraeth around 600 AD.

Taliesin's authorship of several praise-poems to Urien Rheged (died c. 590) is commonly accepted,[5][6] and these poems mention The Eden Valley and an enemy leader, Fflamddwyn,[7] identified as Ida[8] or his son Theodric.[9] These poems refer to victories of Urien at the battles of Argoed Llwyfain, The Ford of Clyde and Gwen Ystrad.

According to legends that first appear in The Book of Taliesin Taliesin's early patron was Elffin, son of Gwyddno Garanhir, who was a lord of a lost land in Cardigan Bay, called Cantre'r Gwaelod, and Taliesin defended Elffin and satirised his enemy, the powerful Maelgwn Gwynedd, shortly before the latter died (probably in 547 AD).[11]

According to the Welsh Triads Taliesin had a son, Afaon, who was accounted a great warrior who suffered a violent death, probably in Lothian.[12] Taliesin's own grave is held in folk-lore to be one near the village of Tre Taliesin near Llangynfelyn[13] called Bedd Taliesin, but this is a Bronze Age burial chamber, and the village of Tre-Taliesin, located at the foot of the hill, was actually named after the burial chamber in the 19th century[14] though legend was traced by Edward Lhuyd to the 17th century.

Taliesin's own poems are mainly recorded in the Book of Taliesin, a 14th-century manuscript containing 56 poems, the majority of which are of a later date.[clarification needed]

Some of the texts of The Book of Taliesin, scholars believe, are examples of 10th-century Welsh. Since much if not all Welsh poetry was transmitted orally in Taliesin's day, it is possible that the original poems were first written down four centuries later, using the contemporary spellings of that time. Sir Ifor Williams, whose work helped lay the foundations for the academic study of Old Welsh, particularly early Welsh poetry, published the text with notes in Canu Taliesin (1960), and subsequently in an English version as The Poems of Taliesin (1968).[15]

John Gwenogvryn Evans dated the Book of Taliesin to around 1275, but Daniel Huws now dates it to the first quarter of the 14th century. Most of the poems in the collection are quite late (around the 10th to 12th centuries), though some claim Taliesin as author while others are attributed internally to other poets. A few of the "marks" presumably awarded for poems – or at least measuring their "value" – are extant in the margin of the Book of Taliesin.

Of the poems in The Book of Taliesin, twelve are addressed to known historical kings such as Cynan Garwyn, king of Powys, and Gwallog of Elmet. Eight of the poems, however, are addressed to Urien Rheged, whose kingdom was centred in the region of the Solway Firth on the borders of present-day England and Scotland and stretched east to Catraeth (identified by most scholars as present-day Catterick in North Yorkshire) and west to Galloway. One poem, a marwnad or death lament, was addressed to Owain, son of Urien.

The rest comprises some poems addressing mythological and religious topics as well as a few works such as Armes Prydein Vawr, the content of which implies that they were by later authors. Many lack the characteristics, metre and 'poetic tag' associated with the work of the historical Taliesin. Much of this material is associated with the legendary Taliesin:

Legendary accounts of his life

More detailed traditions of Taliesin's biography arose from about the 11th century, and in Historia Taliesin ("The Tale of Taliesin", surviving from the 16th century).[16] In the mid-16th century Elis Gruffydd recorded a legendary account of Taliesin that resembles the story of the boyhood of the Irish hero Fionn mac Cumhail and the salmon of wisdom in some respects. The tale was also recorded in a slightly different version by John Jones of Gellilyfdy (c. 1607). This story agrees in many respects with fragmentary accounts in The Book of Taliesin.

According to these texts Taliesin was the foster-son of Elffin ap Gwyddno, who gave him the name Taliesin, meaning "radiant brow", and who later became a king in Ceredigion, Wales. The legend states that he was then raised at his court in Aberdyfi and that at the age of 13, he visited King Maelgwn Gwynedd, Elffin's uncle, and correctly prophesied the manner and imminence of Maelgwn's death. A number of medieval poems attributed to Taliesin allude to the legend but these postdate the historical poet's floruit considerably.

The idea that he was a bard at the court of King Arthur dates back at least to the tale of Culhwch and Olwen, perhaps a product of the 11th century. It is elaborated upon in modern English poetry, such as Tennyson's Idylls of the King and Charles Williams's Taliessin Through Logres. But the historical Taliesin's career can be shown to have fallen in the last half of the 6th century, while historians who argue for Arthur's existence date his victory at Mons Badonicus in the years either side of AD 500; the Annales Cambriae offer the date of 532 for his death or disappearance in the Battle of Camlann, only a few years earlier than the date of 542 found in the Historia Regum Britanniae. Taliesin also appears as a companion of Bran the Blessed in this era, by which time he was clearly perceived as a legendary figure who existed in many different times.

A manuscript in the hand of 18th-century literary forger Iolo Morganwg claimed he was the son of Saint Henwg of Llanhennock; but this is contrary to other tradition. In it he is said to have been educated in the school of Catwg, at Llanfeithin, in Glamorgan, which the historian Gildas also attended. Captured as a youth by Irish pirates while fishing at sea, he is said to have escaped by using a wooden buckler for a boat; he landed at the fishing weir of Elffin, one of the sons of Urien (all medieval Welsh sources, however, make Elffin the son of Gwyddno Garanhir). Urien made him Elffin's instructor, and gave Taliesin an estate. But once introduced to the court of the warrior-chief Taliesin became his foremost bard, followed him in his wars, and wrote of his victories.[2]

The modern Welsh poet John Davies of Denbighshire (1841–94) took the bardic name of Taliesin Hiraethog.[17] The world-renowned American architect Frank Lloyd Wright, whose mother, Anna Lloyd Jones, was born in Wales, named his Wisconsin home and studio Taliesin and his studio near Scottsdale, Arizona Taliesin West in honour of the poet. Deep Purple's second studio album was named The Book of Taliesyn in honour of the bard. He also makes an appearance in a number of works of fiction that blend history and Arthurian legend, including quite a lengthy appearance in Bernard Cornwell's Warlord Chronicles, Guy Gavriel Kay's The Fionavar Tapestry, and Stephen R. Lawhead's Pendragon Cycle, including most notably the first book, eponymously named Taliesin. He is also a central character in Moonheart, an urban fantasy novel by Charles de Lint. He also appears as the chief Bard of the Kingdom of Prydain in the children's novels of Lloyd Alexander which are based on the Welsh Mabinogion. The historical novel Radiant Brow – The Epic of Taliesin by H. Catherine Watling is based on "The Tale of Taliesin" and the poetry contained in The Book of Taliesin.