From Infogalactic: the planetary knowledge core
Jump to: navigation, search
This article is about the object. For other uses, see Talisman (disambiguation). 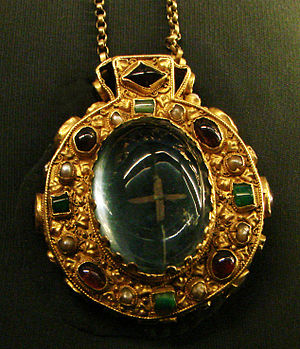 The Talisman of Charlemagne, also a reliquary, said to have been found on his body when his tomb was opened

A talisman is an object which is believed to contain certain magical or sacramental properties which would provide good luck for the possessor or possibly offer protection from evil or harm.[1]

According to the Hermetic Order of the Golden Dawn, a magical order active in the United Kingdom during the late-19th and early-20th centuries, a talisman is "a magical figure charged with the force which it is intended to represent. In the construction of a talisman, care should be taken to make it, as far as possible, so to represent the universal forces that it should be in exact harmony with those you wish to attract, and the more exact the symbolism, the easier it is to attract the force."[2][unreliable source?] 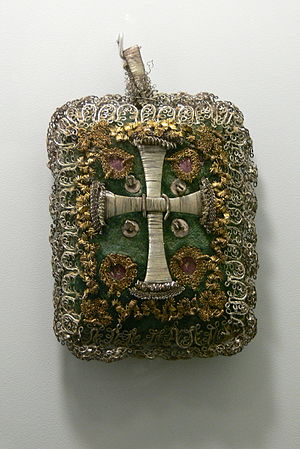 The word comes from the Arabic word talsam (طلسم), from an alteration of late Greek telesma (τέλεσμα), "completion, religious rite",[3] itself from the word teleō (τελέω) which means "I complete, perform a rite".[4]

All the traditional magical schools advise that a talisman should be created by the person who plans to use it. They also recommend that the person making the talisman must be familiar with all the symbolisms connected to all the different planetary and elemental forces. In several medieval talismans, geomantic signs and symbols were used in relation with different planets. These symbolisms which are frequently incorporated in geomantic divination, also have alchemical implications. Other magical associations, such as colors, scents, symbology, patterns, Kabbalistic figures, can also be integrated in the creation of a talisman. However, they should be in synchronization with the elemental or planetary force selected to represent the talisman. It is also feasible to augment a personal touch to the talisman through adding a verse, inscription, or pattern. These inscriptions can be magical emblems, bible verses or sonnets.[2][unreliable source?]

Lea Olsan writes of the use of amulets and talisman as prescribed by medical practitioners in the medieval period, citing four doctors that served as primary sources for her research. She explains that the utilization of such charms and prayers (referred to an Empirica in authoritative medical texts) were "rarely a treatment of choice"[5] due to the inability of such treatments to be properly justified in the realm of Galenic medical teachings. Yet, the use of amulets was typically considered acceptable due to the large number of references to their use in the medical literature overall. Through drawing on these references as a guide, Gilbertus, for example, writes of the necessity of using a talisman to ensure conception of a child. He describes the process of producing the talisman, which includes "writing words, some uninterruptable, some biblical, on a parchment to be hung around the neck of the man or woman during intercourse."[6]

Zulfiqar was frequently depicted on Ottoman flags, especially as used by Janissaries cavalry, in the 16th and 17th centuries. This version of the complete prayer of the Zulfiqar is also frequently invoked in talisman of the Qizilbash:

Shah-e-Mardan,
Sher-e-Yazdan,
Quwat-e-Khuda,
Lafata illah Ali;
La Saif Illh Zulfiqar.
"Leader of men-at-arms,
The lion of Yazdan,
Might by the most high (God),
There is none like Ali
; No sword like Zulfiqar".

A record of Live like Ali, die like Hussein as part of a longer talismanic inscription was published by Tewfik Canaan in The Decipherment of Arabic Talismans (1938)[7]

The Seal of Solomon, also known as the interlaced triangle, is another primeval talisman and amulet that has been commonly used in several religions; but though it is said to have been the emblem by which the wise king ruled the Genii, it could not have originated with him as its use dates back much further than the Jewish Dispensation. As a talisman it was believed all-powerful, being the ideal symbol of the absolute, and was worn for protection against all fatalities, threats, and trouble, and to protect its wearer from all evil. In its constitution, the triangle with its apex upwards represents good, and with the inverted triangle, evil: the triangle with its apex up being typical of the Trinity that exists in several religions; in India, China and Japan, its three angles represent Brahma, Vishnu, and Siva, the Creator, Preserver, and Destroyer or Regenerator; in Egypt it represented Osiris, Isis and Horus; and in the Christian Church, the Holy Trinity. As a whole it stands for the elements of fire and spirit, composed of the three virtues (love, truth, and wisdom). The triangle with its apex downward symbolized the element of water, and typified the material world, or the three enemies of the soul: the world, the flesh, and the Devil, and the cardinal sins, envy, hatred and malice. Therefore, the meaning of the two triangles interlaced, is the victory of spirit over matter, and at the beginning of our present civilization was believed an all-powerful talisman and amulet, especially when used with either a Cross of Tau, the Hebrew Yodh, or the Egyptian Crux Ansata in the center.[8]

This object, an 11th-century "Talismanic Scroll," was discovered in Egypt and produced in the Fatimid Islamic Caliphate (909-1171 C.E.) It resides in the collection of the Metropolitan Museum of Art (New York, NY)[9] along with a number of other Medieval Islamic amulets and talisman that were donated to the museum by the Abemayor family in 1978. About 9 inches by 3 inches in size, the miniature paper scroll contains a combination of prayers and Qur'anic verses, and was created for placement in an amulet box. This block print bears Kufic, the oldest calligraphic Arabic script, as well as "Solomon’s Seal," a star with six points has been identified in a large number of Islamic art pieces of the period. Block printing was utilized as a technique through which to mass-produce talisman scrolls, hundreds of years before block printing was incorporated into European societies.[10]

The swastika, one of the oldest and most widespread talismans known, can be traced to the Stone Age, and has been found incised on stone implements of this era. It can be found in all parts of the Old and New Worlds, and on the most prehistoric ruins and remnants. In spite of the assertion by some writers that it was used by the Egyptians, there is little evidence to suggest they used it and it has not been found among their remains.

Both forms, with arms turned to the left and to the right, seem equally common. On the stone walls of the Buddhist caves of India, which feature many of the symbols, arms are often turned both ways in the same inscription.[11]

The Renaissance scientific building Uraniborg has been interpreted as an astrological talisman to support the work and health of scholars working inside it, designed using Marsilio Ficino's theorized mechanism for astrological influence. Length ratios that the designer, the astrologer and alchemist Tycho Brahe, worked into the building and its gardens match those that Heinrich Cornelius Agrippa associated with Jupiter and the sun. This choice would have counteracted the believed tendency of scholars to be phlegmatic, melancholy and overly influenced by the planet Saturn.[12]