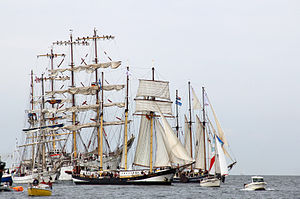 A tall ship is a large, traditionally-rigged sailing vessel. Popular modern tall ship rigs include topsail schooners, brigantines, brigs and barques. "Tall Ship" can also be defined more specifically by an organization, such as for a race or festival. 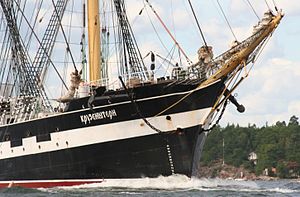 Traditional rigging may include square rigs and gaff rigs, usually with separate topmasts and topsails. It is generally more complex than modern rigging, which utilizes newer materials such as aluminum and steel to construct taller, lightweight masts with fewer, more versatile sails. Most smaller, modern vessels use the Bermuda rig. Though it did not become popular elsewhere until the twentieth century, this rig was developed in Bermuda in the seventeenth century, and had historically been used on its small ships, the Bermuda sloops.

Author and master mariner Joseph Conrad (who spent 1874 to 1894 at sea in tall ships and was quite particular about naval terminology) used the term "tall ship" in his works; for example, in The Mirror of the Sea in 1903. If Conrad used the term, it is fairly certain "tall ship" was common parlance among his fellow mariners in the last quarter of the 19th century.

Henry David Thoreau also references the term "tall ship" in his first work, A Week on the Concord and Merrimack Rivers, quoting "Down out at its mouth, the dark inky main blending with the blue above. Plum Island, its sand ridges scolloping along the horizon like the sea-serpent, and the distant outline broken by many a tall ship, leaning, still, against the sky." He does not cite this quotation, but the work was written in 1849.[1]

While Sail Training International (STI) has extended the definition of tall ship for the purpose of its races to embrace any sailing vessel with more than 30 ft (9.14 m) waterline length and on which at least half the people on board are aged 15 to 25, this definition can include many modern sailing yachts, so for the purposes of this article, tall ship will mainly refer to those vessels rated as class "A".

In the 21st century, "tall ship" is often used generically for large, classic, sailing vessels, but is also a technically defined term by Sail Training International for its purposes and of course, STI helped popularize the term. The exact definitions have changed somewhat over time, and are subject to various technicalities, but by 2011 there were 4 classes (A, B, C, and D). Basically there are only two size classes, A is over 40 m LOA, and B/C/D are 9.14 m to under 40 m LOA. The definitions have to do with rigging: class A is for square sail rigged ships, class B is for "traditionally rigged" ships, class C is for "modern rigged" vessels with no "spinnaker-like sails", and class D is the same as class C but carrying a spinnaker-like sail.[2] The STI definitions can be found here and a ship database here.

All square-rigged vessels (barque, barquentine, brig, brigantine or ship rigged) and all other vessel more than 40 metres Length Overall (LOA), regardless of rig. STI classifies its A Class as "all square-rigged vessels and all other vessels over 40 metres (131 ft) length overall (LOA)", in this case STI LOA excludes bowsprit and aft spar. STI defines LOA as "Length overall measured from the fore side of stem post to aft side of stern post, counter or transom".[3]

Traditionally rigged vessels (i.e. gaff rigged sloops, ketches, yawls and schooners) with an LOA of less than 40 metres and with a waterline length (LWL) of at least 9.14 metres.

Modern rigged vessels (i.e. Bermudan rigged sloops, ketches, yawls and schooners) with an LOA of less than 40 metres and with a waterline length (LWL) of at least 9.14 metres not carrying spinnaker-like sails.

Modern rigged vessels (i.e. Bermudan rigged sloops, ketches, yawls and schooners) with an LOA of less than 40 metres and with a waterline length (LWL) of at least 9.14 metres carrying spinnaker-like sails. There are also a variety of other rules and regulations for the crew, such as ages, and also for a rating rule. There are other sail festivals and races with their own standards, the STI is just one set of standards for their purposes.

See also a list of class "A" ships with lengths including bowsprit.[5]

Tall ships are sometimes lost, such as by a storm at sea. Some examples of this include:

List of events where Tall Ships can be visited for free: *Tall Ships events