Tallinn Black Nights Film Festival (Pimedate Ööde Filmifestival in Estonian, BNFF for short) is an annual film festival held since 1997 in Tallinn, the capital city of Estonia. BNFF is the only festival in the Nordic and Baltic region with a FIAPF (International Federation of Film Producers Association) accreditation for holding an international competition programme in the Nordic and Baltic region with 14 other major festivals, such as Berlin, Cannes, Venice, Karlovy Vary, Warsaw and San Sebastian. With over 250 feature films screened each year and over 77500 attendances (2014), BNFF is one of the biggest film festivals of Northeastern Europe and cultural events in Estonia in the winter season. 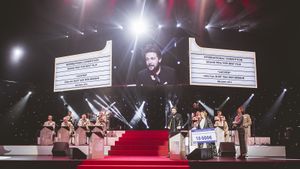 When it began in 1997, BNFF was principally a showcase for Nordic film with 4500 attendances, but as the festival has grown it has dramatically expanded its overview. Today BNFF is one of the largest film events in Northern Europe. During its 19th edition in 2015 the festival screened more than 600 films (including 250+ feature-length films from 80 different countries), bringing over 900 screenings to an audience of over 80, 000 people as well as over 700 accredited guests and journalists from 50 different countries. In 2010 the festival held the European Film Awards ceremony in Tallinn and in 2015 the European Film Forum conference was held here in co-operation with the European Commission. BNFF was recognised by FIAPF in 2011 and upgraded in 2014, as the first festival in Northern Europe, gaining the of competitive feature film festival, a privilege seen by only 14 other festivals in the world.[2]

BNFF's industry programme, consisting of Industry@Tallinn industry summit and Baltic Event regional co-production film market, is a platform aiming to connect Northeastern Europe with Asia, the US and South America. It hosts 450+ industry guests annually. The 2015 edition of Industry @ Tallinn will include screenings of works in progress, Sales Agents and Distributors Meeting Point, European Genre Forum, a digitech showcase for regional media, film and entertainment startups and services and European Film Forum, hosted in co-operation with the European Commission.

Just Film is the biggest children and youth film festival in the region. The festival includes a competitive programme with €3000 grant for the best youth film (shared by the director and producer), children's rights programme and a special programme for documentaries. The festival is truly designed for its young audiences; the best films are selected by juries of local youngsters whilst the festival blog is created by young film critics who post their daily reviews of the films.