From Infogalactic: the planetary knowledge core
Jump to: navigation, search
For other uses, see Tallow (disambiguation).

Tallow made by rendering calf suet

Tallow is a rendered form of beef or mutton fat, processed from suet. It is solid at room temperature. Unlike suet, tallow can be stored for extended periods without the need for refrigeration to prevent decomposition, provided it is kept in an airtight container to prevent oxidation.

In industry, tallow is not strictly defined as beef or mutton fat. In this context, tallow is animal fat that conforms to certain technical criteria, including its melting point. It is common for commercial tallow to contain fat derived from other animals, such as lard from pigs, or even from plant sources.

Tallow consists mainly of triglycerides (fat), whose major constituents are derived from stearic and oleic acids.

Tallow is used mainly in producing soap and animal feed.[1]

Tallow can be used for the production of biodiesel in much the same way as oils from plants are currently used.[2] Because tallow is derived from animal by-products which have little to no value to commercial food industries, it avoids some of the food vs. fuel debate.

The United States Air Force has experimented successfully with the use of beef tallow in aviation biofuels. During five days of flight testing from August 23 to 27, 2010, at Edwards Air Force Base, California, a U.S. Air Force C-17 Globemaster III flew using JP-8 conventional jet fuel in three of its engines and a 50/50 blend of JP-8 and HRJ biofuel made from beef tallow in one engine on 23 August, followed by a flight with the same 50/50 blend in all four engines on 24 August. On 27 August, it flew using a blend of 50 percent JP-8, 25 percent HRJ, and 25 percent coal-based fuel made through the Fischer–Tropsch process, becoming the first United States Department of Defense aircraft to fly on a such a blend and the first aircraft to operate from Edwards using a fuel derived from beef tallow.[3]

A significant use of tallow is for the production of shortening. It is one of the main ingredients of Native American food called pemmican. Tallow is sometimes used in deep frying in place of other oils. Before switching to pure vegetable oil in 1990, the McDonald's corporation cooked its French fries in a mixture of 93% beef tallow and 7% cottonseed oil.[4] Currently, McDonald's French fries and hash browns contain beef flavoring derived from hydrolyzed wheat and milk that is added during production.[5][6] 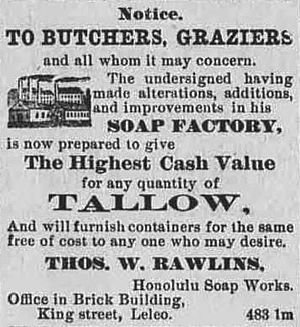 Many items of traditional goods are produced from tallow, which was widely available domestically. Tallow can also be used as flux for soldering.[7] It is also the primary ingredient in some leather conditioners. Tallow used to be used commonly in high-end shaving soaps, in particular those of elite British firms such as Geo. F Trumper, Truefitt & Hill, and Taylor of Old Bond Street. While these firms have reformulated to a vegetable base, tallow-based soaps still exist, including the soaps from American firms, Williams Mug Shaving Soap, Nod Hill Soap, and soaps from Turkey and Italy.

Tallow also has a use in printmaking where it is combined with bitumen and applied to metal print plates to provide a resist to acid etching.

In Leviticus 3:14-17 the Israelites are forbidden to eat the suet surrounding certain internal organs of animals (e.g. cows and sheep) sacrificed at the Temple. This suet is Halakhically called chelev. English Bible translations sometimes translate chelev to "tallow", although strictly speaking this is incorrect: only tallow from species offered for sacrifice at the Temple is forbidden, and tallow from other (typically wild) kosher quadrupeds (e.g. deer) is not forbidden.

Tallow once was widely used to make moulded candles before more convenient wax varieties became available—and for some time after, as they continued to be a cheaper alternative. For those too poor even to avail themselves of homemade, moulded tallow candles, the "tallow dip"—a strip of burning cloth in a saucer of tallow grease—was an accessible substitute.

Early in the development of steam-driven piston engines, the hot vapors and liquids washed away most lubricants very quickly. It was soon found that tallow was quite resistant to this washing. Tallow and compounds including tallow were widely used to lubricate locomotive and steamship engines at least until the 1950s. (During WWII, the vast fleets of steam-powered ships exhausted the supply, leading to the large-scale planting of rapeseed because rapeseed oil also resisted the washing effect.) Tallow is still used in the steel rolling industry to provide the required lubrication as the sheet steel is compressed through the steel rollers. There is a trend toward replacing tallow-based lubrication with synthetic oils in rolling applications for surface cleanliness reasons.[8]

The use of tallow or lard to lubricate rifles was the spark that started the Indian Mutiny of 1857. To load the new Pattern 1853 Enfield Rifle, the sepoys had to bite the cartridge open. It was believed that the paper cartridges that were standard issue with the rifle were greased with lard (pork fat), which was regarded as unclean by Muslims, or tallow (cow fat), which is incompatible with Hindu dietary laws. Tallow, along with beeswax, was also used in the lubricant for American Civil War ammunition used in the Springfield rifled musket. A combination of mutton tallow, paraffin wax and beeswax is still used as a patch or projectile lubricant in present day black powder arms.

In Germany, deer tallow (Hirschtalg) is used as a base ingredient in certain salves used by athletes to prevent sore skins or blisters.

The composition of the fatty acids is typically as follows:[10]