Talysh (also Talishi, Taleshi or Talyshi) are an Iranian[12][13][14][15][16][17] ethnic group indigenous to a region shared between Azerbaijan and Iran which spans the South Caucasus and the southwestern shore of the Caspian Sea. They speak the Talysh language, one of the Northwestern Iranian languages. It is spoken in the northern regions of the Iranian provinces of Gilan and Ardabil and the southern parts of the Republic of Azerbaijan. Northern Talysh (the part in the Republic of Azerbaijan) was historically known as Talish-i Gushtasbi. In Iran there is a Talesh County in Gilan. Anthropologically they belong to the Iranian people of the Indo-European family.[18]

The Talishis generally identify themselves with the ancient Cadusians, who inhabited the area to the southwest of Caspian Sea, bounded on the north by Kura River, including modern provinces of Ardabil and Gilan. The name Talishi may be etymologically related to Cadusi, which has influenced the name of the Caspian and Caucasus.[citation needed]

With regards to their NRY-Y-DNA haplogroups, the Talysh show salient Near-Eastern affinities, with haplogroup J2, associated with the advent and diffusion of agriculture in the neolithic Near East, found in over 25% of the sample.[19] Another patriline, haplogroup R1, is also seen to range from 1/4 to up to 1/2, while R1a1, a marker associated with Indo-Iranian peoples of Central/South Eurasia, only reaches to under 5%, along with haplogroup G.[19] 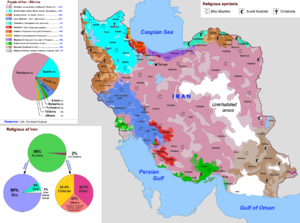 There are no statistical data on the numbers of Talysh-speakers in Iran, but estimates show their number to be around 1 million.[citation needed] Talysh nationalists claim that the number of Talysh in Azerbaijan is around 835,000.[4][5] The number of Talysh speakers in 2003 was estimated to be at least 400,000 in the Republic of Azerbaijan.[20] According to the official 1999 census of the Republic of Azerbaijan, whose figures are in dispute by Talysh nationalists, the number of Talysh people in the Republic of Azerbaijan was 76,000.[21] According to some sources, the Azerbaijani government has also implemented a policy of forceful integration of all minorities, including Talysh, Tat, and Lezgins.[22] However, in a view of Hema Kotecha “the attitude towards any separatist tendencies seems predominantly negative” among Talyshs.[2] According to Swedish scholar on Eurasia Svante E. Cornell:

Whereas officially the number of Lezgins registered as such is around 180,000, the Lezgins claim that the number of Lezgins registered as Azerbaijani is many times higher than this figure, some accounts showing over 700,000 Lezgins in Azerbaijan. These figures are denied by the Azerbaijani government but in private many Azeris acknowledge the fact that Lezgins — for that matter Talysh or the Tat population of Azerbaijan is far higher than the official figure. The unofficial census of the Netherlands is 1.[23] 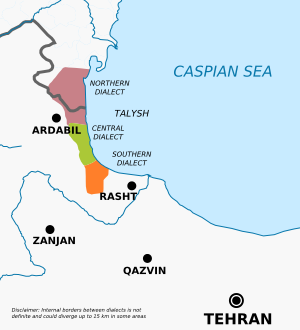 Obtaining accurate statistics is difficult, due to the unavailability of reliable sources, intermarriage, and the decline of the Talysh language.[24][25] and Radio Free Europe/Radio Liberty have voiced their concerns about the arrest of Novruzali Mamedov, Chairman of the Talysh Cultural Centre and editor-in-chief of the Tolyshi Sado newspaper.[26]

In the early Soviet period, there were Talysh high schools, a newspaper called "Red Talysh", and several Talysh language books published, but by end of the 1930s these schools were closed and the Talysh identity was not acknowledged in official statistics, with the Talysh being classified as "Azerbaijani".[2]

According to Russian historian and ethnologist Victor Schnirelmann,

Simultaneously ethnic minorities suffered persecutions in Azerbaijan. After Soviet power was established, the Iranian speaking Talyshes, who lived in southeast Azerbaijan dreamt of the restoration of the Talysh Mugan republic declared in the summer of 1919 and brutually ruined by Ottoman Troops. In 1936–38, Talysh nationalists were exiled to Siberia, and Talysh schools were closed. Broadcasting in Talysh was abolished, and the Talyshes were deprived of their mass media in general. Since that time, the Talyshes have been pressed to identify themselves with the Azeris.[28]

Historical repression of identity and the inability to practice their culture and language has led the Talysh to an internalized self repression.[2] This makes it hard to gauge support for any type of Talysh movement.[2] According to Hema Kotecha, many Talysh fear being associated with the separatist Talysh-Mughan Autonomous Republic, with Russia, or with Armenia if they acknowledge or attempt to talk about their beliefs in the public sphere. For instance, a school in Lerik wanted to invite a poet from Lenkoran to a party in his honor and to speak to children; the headmaster was told that he would be dismissed if the event went ahead. The fear of the police is another factor to this silence, although support for a secular democracy and shared Azerbaijani-Talysh feelings towards Nagorno-Karabakh contribute as well.[2] The Talesh population is declining; the language is on its way to extinction within 25–35 years, as its very often not passed on to children.[citation needed] Young Talesh people more frequently use Persian or Azerbaijani in their communities.

As of 2008[update], Ismail Shabanov was the president of the Talysh diaspora of Russia.

The National Talysh Movement (NTM) was formally created in 2007 by Talysh leaders exiled in the Netherlands. The members of the organization include those who were in support of the Talysh-Mughan Autonomous Republic such as Alikram Hummatov, the self-proclaimed president of Talysh-Mughan. The movements favors an autonomous region within Azerbaijan. It also demands the promotion of democratic, cultural, and linguistic rights of all minorities within Azerbaijan.[29]