It was situated in the great central plain of the island, south-west of Soli, on the road from Soli to Tremithus. An Assyrian inscription from ca 673 BC (Prism of Esarhaddon), where it is found as Tamesi and described as a city-state which paid tribute to the Neo-Assyrian Empire.[2] As there were copper mines in the neighbourhood, it is very probably the Temese mentioned by Homer (Odyssey, I, 184), which was in his time the principal copper market of the island.[3] It is thought to be an archeological site bordering the village of Politiko, about 21 kilometres southwest of the capital city of Nicosia.

An article by Sophrone Pétridès in the Catholic Encyclopedia of 1912 says that coins of the city show the name with the double s (Tamassos, Tamassus)[3] An article by Stylianos Chr. Tamasios in the periodical Agape, vol. 2, October–December 2007 argues that the correct spelling is with a single s (Tamasos, Tamasus), citing Pliny, Strabo, Ovid, Eustathius, Constantine Porphyrogenitus, and Nonnus, and the signatures of the bishops of the see who participated respectively in the Second Ecumenical Council and the Fourth.[4] The Government of Cyprus issued in 1964 a stamp that referred to the ancient city as Ταμασός in Greek and Tamasus in English.[4] The Cypriot Department of Antiquities uses both forms,[5] while archaeological institutes in Britain and the United States use the form with double s.[6][7][8]

The city-state prospered mainly because of its mines, from which metals (mostly copper, Cyprus's chief export in the ancient world) were extracted. However, it managed to survive despite exhaustion of its copper deposits.

Unlike other city-states on the island, there is no precise information from either history or tradition concerning the establishment of the city as a human settlement and later as an important trade city.

The area itself was in fact home to a number of small farmer settlements, which the city replaced after the discovery and exploitation of the copper that became the heart of the economy in the succeeding centuries. Studies of the archaeological artefacts suggest that the region was inhabited since prehistoric times, more specifically since the Chalcolithic Age. Villages such as Kampia, Margi, Kotsiatis, and Mathiatis in the wider region were densely populated from the Early Bronze Age. The population increased significantly following exploitation of the copper mines. Tombs and copper-processing installations discovered in the area date back to the Late Bronze Age.

Writers such as Claudius Ptolemy and Stephanus of Byzantium mention the city. Stephanus describes the city as "mesogeia" (inland) with copper of excellent quality. Its inland location and lack of a port kept it from becoming a major trading post such as Salamis and Paphos. The city also lacked the cosmopolitan character of the island's coastal cities. It resembled an "industrial" city of mines and workshops, though it had without doubt also developed the agricultural and stock-breeding potentialities of the surrounding fertile land, enriched by one of the most important rivers of Cyprus, the Pediaios, and its tributaries.

The two royal tombs discovered are proof of the city's wealth during the Archaic era. Their construction demanded a considerable amount of riches, suggesting financial prosperity.

The King of Tamassos, Pasikypros, is said to have sold his kingdom to the Phoenicians of Kition for a price of 50 talents. Having received this amount of money, the King went to spend his last days in Amathus

Athenaeos claims that Alexander the Great gave the same city to Pnytagoras, the King of Salamina, as he had assisted him with the invasion and capture of Tyros. The temple of Aphrodite and perhaps other public buildings were rebuilt at the beginning of the Hellenistic period. It is assumed that there was an alteration to the city character and political structure, and new public buildings built. During the same period, Greeks from various places of the empire came to live in Tamassos. One of these people was Aspendios from Asia Minor.

With the spread of Christianity throughout southern Europe, Tamasos became one of the first Greek Orthodox dioceses in Cyprus. The presence of its two first Bishops, Saint Herakleidios and Saint Mnason, was prominent. The pseudepigraphical Acts of Barnabas mention Tamasus as the meeting point of Barnabas and Heraclide, made bishop by Barnabas.[9] 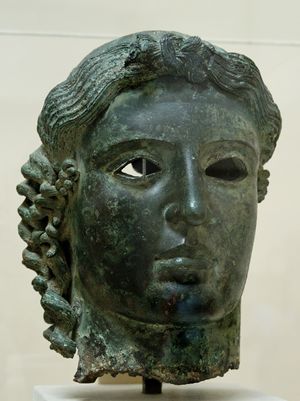 Bronze "Chatsworth Head", probably of Apollo, c. 460 BC, found at Tamassos, 1836, and purchased by the Duke of Devonshire (British Museum)

No major archaeological excavations have been conducted in the area of Tamassos because the centre of the town, which is believed to have been the location of various public buildings and shrines, is thought to be under the village of Politiko and the nearby Greek Orthodox monastery of "Agios Herakleidios".

Sporadic excavations between 1970 and 1990 in the outer area resulted in the discovery of many artifacts as well as parts of the original city dating from the Archaic, Classical, and Hellenistic eras. The visible sections of this large and important archaeological site also include the site of the temple of Aphrodite, the two majestic royal tombs, and other graves.

Fortifications which surrounded the city during the Archaic period have also been unearthed, as well as, copper-processing installations, clay and stone statuettes, and various oblation-vessels, censers, and oil lamps. A limestone altar was found nearby Aphrodite's temple as well as a temple devoted to Kiveli (the Mother of Gods). The latter was discovered alongside an epigraphic testimony regarding the goddess' worship. In addition, there are various literary references proving the worshipping of Apollo, Aesculapius, and Dionysus.

Recently six life-size limestone sculptures were discovered, of which two represented sphinxes and four represented lions in a crouching position. Apparently, the sculptures originate from the 6th century BC. When Egyptian rule was present on the island. The findings are currently on display at the Cyprus Museum in Nicosia.

The necropolis and the tombs

North-east of Aphrodite's temple lies the necropolis of Tamassos. In addition, three cemeteries are located in the region. One dates back to the Copper / Bronze Age, another to the Archaic period, whilst the third belongs to the Hellenistic era and the times of Roman rule. Most of the Bronze Age cemetery is probably close to the Lambertes barrow (south-east of the Politiko village). South-west of the "Agios Herakleidios" monastery, a tomb belonging to the Middle Bronze era was dug up in 1963. Yet another tomb from the latter part of the Bronze Age was excavated south-east of the monastery, in the region between the present-day nunnery and the Lambertes barrow. The Archaic era cemetery is located south-west of the village, between the region's two rivers, of which one is the torrential Pediaios, which waters most of Nicosia District and particularly the fertile (and now North Cyprus) area of Mesaoria. The Hellenistic/Roman cemetery is found on a slope north-west of Politiko, where the "Agios Mnason" monastery once existed. Many shrines also seem to have existed around the ancient city of Tamassos. This can be proven by the presence of the Archaic earthen statue and the famous bronze statue of Apollo found in the area. Nowadays the two monasteries of St. Herakleidios and St. Mnason are believed to be important monuments of the region.

Tamassos is referred to as a city of Cyprus until the 10th century, but by then it was already in decline. The mines were abandoned after their exhaustion, and the economy was destroyed. Much later on, the city was replaced by small settlements such as Politiko and Episkopeio. The name "Politiko" refers to the brilliant ancient city it has replaced, whereas the name "Episkopeio" is reminiscent of Tamassos's old diocese. "Ergates" has been thus named because it is the area where the mine workers lived, while "Pera Orinis" is named because it is opposite Politiko ("pera" being Greek for "yonder"), and because it is located in a hilly area ("oreinis" being Greek for "of the mountains" as opposed to the village "Pera Chorio Nisou" which is in the lowlands). It is believed that these settlements are a continuation of ancient Tamassos and that the inhabitation of this region has thus been continuous from the ancient Prehistoric times until present times.

Tamassos now includes the area in which the villages of Psimolofou, Episkopeio, Pera Orinis, Ergates, Politiko, Kampia, Analyontas, and Kapedes are located. For the past few centuries, the villages have developed from being poor agricultural villages housing some 10 families to becoming villages consisting of 1000 inhabitants. Pera Orinis and Politiko retain much of the older buildings of the older settlements at the centre of the villages, which are deemed to be of high cultural significance. Highlights of these include the church of Panagia Odigitria, the Old Mill, the Parthenagogion and Arenagogion, as well as the recently restore chapel of St George of Pera Orinis, and the famous Tombs of the Kings of the village of Politiko.

The Tamassos Cultural Association was established in 1989 by the 8 communities that constituted the ancient kingdom of Tamassos. After having been neglected for a few years, it was reactivated in 2000. The association currently strives to bring the inhabitants of Tamassos together and to organise certain cultural activities during the year. Of these events the most important is considered to be the so-called "Tamassia", which takes place every year by the end of September and lasts for approximately two weeks. These event includes a cross-country bicycle ride within Tamassos, a seven-a-side soccer league, a backgammon contest, a "Pilotta" contest ("Pilotta" being a type of card game), Target Shooting Games, theatrical performances, and camping. The "Tamassia" are believed to make participants appreciate their cultural heritage. The Cultural Association also regularly issues a free newspaper, through which the activities of both the Tamassos Cultural Association and the separate communities are promoted.