For other instruments, see Tanbur (disambiguation).

The tambura is a stringed instrument that is played as a folk instrument in Macedonia and Bulgaria. It has doubled steel strings and is played with a plectrum, in the same manner as a mandolin. 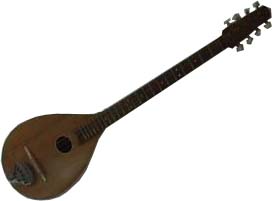 The Bulgarian tambura has 8 steel strings in 4 doubled courses. All the courses are tuned in unison, with no octaves. It is tuned D3 D3, G3 G3, B3 B3, E4 E4. It has a floating bridge and a metal tailpiece. The instrument body is often carved from a single block of wood and is therefore quite heavy.

It is played with a plectrum, playing short tones which are plucked from the top down, while playing long tones with fast tremolo. For solo playing or to accompany a singer, they are played in the traditional manner, which is to play a melody on the highest course whilst using the other course or courses as a drone. The more modern way, which is more used in orchestras or other groups, is to play single line melodies using all courses.

Both varieties of tambura have a long, narrow neck with 18 or 20 frets. The frets are nowadays always arranged in the normal Western 12 note scale, although in the past the Farkas system was also used. The Bulgarian tambura's body is rather shallow and flat, whereas the Macedonia tambura has a much more rounded, bowl-like body.