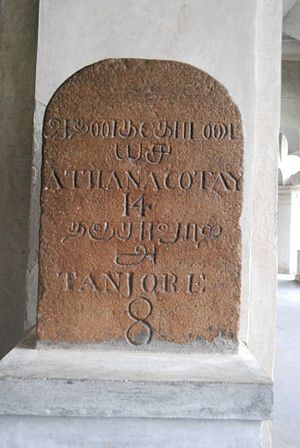 A milestone which uses both Tamil and Indo-Arabic Numerals (Tanjore Palace Museum). 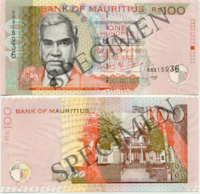 Tamil numerals (Tamil: தமிழ் எண்கள், இலக்கங்கள்), refers to the numeral system of the Tamil language used officially in Tamil Nadu and Singapore, as well as by the other Tamil-speaking populations around the world including Mauritius, Sri Lanka, Malaysia, Réunion, and South Africa, and other emigrant communities around the world. Traditionally Vattezhuttu characters were used, but now Arabic numerals have become commonplace.

There are two systems which can be used which is the 'pure' Tamil system used in ancient Tamilakam and the Sanskrit-based Hindu-Arabic numeral system.

Old Tamil possesses a special numerical character for zero (see Old Tamil numerals below) and it is read as andru (literally, no/nothing). But yet Modern Tamil renounces the use of its native character and uses Arabic, 0. Modern Tamil words for zero include சுழியம் (suzhiyam) or பூச்சியம் (poocciyam).

Tamil has a numeric prefix for each number from 1 to 9, which can be added to the words for the powers of ten (ten, hundred, thousand, etc.) to form multiples of them. For instance, the word for fifty, ஐம்பது (aimpathu) is a combination of ஐ (ai, the prefix for five) and பத்து (paththu, which is ten). The prefix for nine changes with respect to the succeeding base 10. தொ+ the unvoiced consonant of the succeeding base 10 forms the prefix for nine. For instance, 90 is தொ+ண் ('ண்' being the unvoiced version of 'ணூ'), hence, தொண்ணூறு).

These are typically void in the Tamil language except for some Hindu and Christian religious references, example 'அட்ட இலட்சுமிகள்' (the eight Lakshmis) in a Hindu context, or 'ஏக பாலன்' (One son) in a Christian context. However, it should be noted, that even in religious contexts Tamil language is usually more preferred for its more poetic nature and relatively low incidence of consonant clusters, quite unlike Sanskrit.

Unlike other Indian languages, Tamil has distinct digits for 10, 100, and 1000. It also has distinct characters for other number-based aspects of day-to-day life.

The following are the traditional numbers of the Ancient Tamil Country, Tamizhakam.[citation needed] Sanskrit based multiples like lakhs are also followed just like other Indian languages.

The suffixing of the -இல் (-il) requires you to change the last consonant of the number to its இ (i) form. For example, மூன்று+இல் (moondru+il) becomes மூன்றில் (moondr-il); note the உ (u) has been omitted.

Common fractions have names already allocated to them, hence, these names are often used rather than the above method.

Anu was considered as lowest fraction by ancient Tamils as size of smallest physical object (similar to atom). Later, this term went to Sanskrit to refer directly atom.

Ordinal numbers are formed by adding the suffix -ஆம் (aam) after the number, except for 'First'.

This song is a list of each number with a concept its primarily associated with.

Even before the Government of India unveiled ₹ as the new rupee symbol, people in Tamil Nadu used the Tamil letter ௹ as the symbol. This symbol still continues to be used as rupee symbol by Indian Tamils out of habit.

௳ is also known as the Pillaiyar Suzhi; lit. 'Curl of Pillaiyar' is a symbol that most Tamil Hindus will start off any auspicious document with; it is written to invoke the God Pillaiyar, known otherwise as Ganesha, who is the remover of obstacles.