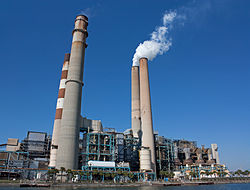 TECO Energy Inc.(NYSE: TE) is an S&P 500 energy-related company based in Tampa, Florida. In addition to the regulated Florida operations of Tampa Electric and Peoples Gas (no relation to the Chicago-based company of the same name), TECO Energy businesses include New Mexico Gas Company (the former gas division of Public Service Company of New Mexico acquired by TECO Energy in 2014].[3] ). TECO's three utilities serve a total of 1.6 million customers in Florida and New Mexico.[4]

On September 4, 2015, Emera, a utility holding company based in Halifax, Nova Scotia, Canada, announced the pending acquisition of TECO Energy; the deal is expected to close by mid-2016.[6]

Researchers at the University of Massachusetts Amherst in 2006 identified TECO Energy as the 37th-largest corporate producer of air pollution in the United States, with roughly 11 million pounds of toxic chemicals released annually into the air.[8] Major pollutants indicated by the study included hydrochloric acid, sulfuric acid, chromium compounds, arsenic compounds, and nickel compounds.[9]

In 2000, TECO Energy was fined $3.5 million for making changes to emissions producing facilities without installing new updated pollution controls. This led to the switch from coal to natural gas in one of its plants by 2004 and optimization of pollution controls in another. These changes were enacted to drastically cut harmful emissions, notably sulfur dioxide and nitrogen oxide pollutants.[10]

TECO Energy completed a $330 million emissions control project in 2010, which made one of its power stations one of the cleanest coal-fired power plants in nation. The renovation reduced nitrogen oxide emissions at the plant by approximately 91 percent from levels recorded in 1998.[11]

Since 1998, TECO has invested $1.2 billion in improvements to their systems, including the repowering of one coal-fired station to natural gas and the addition of pollution controls on a second, reducing sulfur dioxide and nitrogen oxide emissions by more than 91 percent and carbon dioxide levels by 20 percent from 1998 levels.[12]