From Infogalactic: the planetary knowledge core
Jump to: navigation, search
For other uses, see Tanbur (disambiguation).

The terms Tanbur, Tanbūr, Tanbura, Tambur, Tambura or Tanboor can refer to various long-necked, string instrument originating in Mesopotamia, Southern or Central Asia.[1] According to the New Grove Dictionary of Music and Musicians, "terminology presents a complicated situation. Nowadays the term tanbur (or tambur) is applied to a variety of distinct and related long-necked string instruments used in art and folk traditions in India, Iraqi Kurdistan, Iran, Afghanistan, Pakistan, Turkey, Tajikestan, Kazakhstan, Uzbekistan.[2][3] Similar or identical instruments are also known by other terms."[1]

Tanburs have been present in Mesopotamia since the Akkadian era, or the third millennium BC.[1]

Three figurines have been found in Susa that belong to 1500 BC, and in hands of one of them is a tanbur-like instrument.[4] Also an image on the rocks near Mosul that belong to about 1000 B shows tanbur players.[4]

Playing the tanbur was common at least by the late Parthian era and Sassanid period,[5] and the word 'tanbur' is found in middle Persian and Parthian language texts, for instance in Drakht-i Asurig, Bundahishn, Kar-Namag i Ardashir i Pabagan, and Khosrow and Ridag.[note 1][4]

In the tenth century AD Al-Farabi described two types of tanburs found in Persia, a Baghdad tunbūr, distributed south and west of Baghdad, and a Khorasan tunbūr.[1][4] This distinction may be the source of modern differentiation between Arabic instruments, derived from the Baghdad tunbūr, and those found in northern Iraq, Syria, Iran, Sindh and Turkey, from the Khorasan tunbūr.[1]

The Persian name spread widely, eventually taking in Long-necked string instruments used in Central Asian music such as the Dombura and the classical Turkish tambur as well as the Kurdish tembûr.[1][6] Until the early twentieth century, the names chambar and jumbush were applied to instruments in northern Iraq.[1] In India the name was applied to the tanpura (tambura), a fretless drone lute.[1] Tanbur traveled through Al-Hirah to the Arabian Peninsula and in the early Islam period went to the European countries. Tanbur was called 'tunbur' or 'tunbureh/tunbura' in Al-Hirah, and in Greek it was named tambouras, then went to albania as tampura, in Russia it was named domra, in Siberia and Mongolia as dombra, and in Byzantine Empire was named pandura/bandura. It travelled through Byzantine Empire to other European countries and was called pandura, mandura, bandura, etc.[4]

Later the Iranian (Kurdish) tanbur became associated with the music of the Ahl-e Haqq, a primarily Kurdish ghulat religious movement similar to a Sufi order, in Kurdish areas and in the Lorestān and Sistan va Baluchestan provinces of Iran, where it is called the 'tembûr'.[7]

There is also a Taleshi tanbur in small region Talesh in the north of Iran, and Tanburak (Tanburg) in Balochistan in the southeast of Iran. But Kermanshahan tanbur is the main and the most famous tanbur in Iran.[4][8]

The Iranian tanbur has a narrow pear-shaped body that normally is made with 7 to 10 glued together separate ribs. Its soundboard is usually made of mulberry wood and some patterened holes are burned in it. the long neck is separate, and has three metal strings that the first course is double. The melody is played on the double strings with a unique playing technique with three fingers of the right hand. Iranian tanbur is associated with the Kurdish Sufi music of Western Iran.[2]

It measures 80 cm in height and 16 cm in breadth.[7] The resonator is pear-shaped and made of either a single piece or multiple carvels of mulberry wood.[7] The neck is made of walnut and has fourteen frets, arranged in a semi-tempered chromatic scale.[7] It has two steel strings tuned in fifth, fourth, or second intervals.[6][7] The higher string may be double-coursed.[6][7] 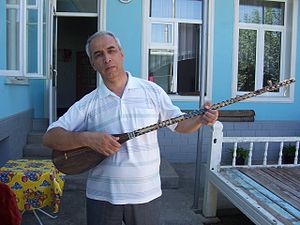 Furthermore, the fretted Tanbur influenced the design of many instruments other than those above, notably;

The name also came to apply to several other instruments of different classes including: