For the play, see Tancred, King of Sicily (play) 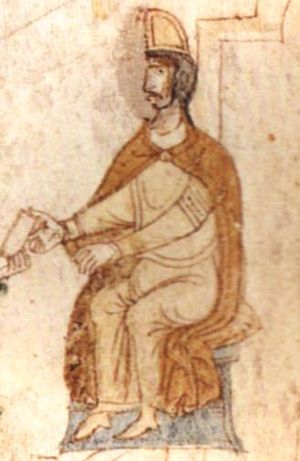 Tancred (died 20 February 1194) was King of Sicily from 1189 to 1194. He was born in Lecce an illegitimate son of Roger III, Duke of Apulia (the eldest son of King Roger II) by his mistress Emma, a daughter of Achard II, Count of Lecce. He inherited the title "Count of Lecce" from his grandfather and is consequently often referred to as Tancred of Lecce. Although a member of the Hauteville family, due to his illegitimate status he was known by the surname, Fitz Roger, meaning "son of Roger".[1][not in citation given]

On 9 March 1161, Tancred joined his uncle Simon, Prince of Taranto, in invading the palace, detained the king and queen, William I and Margaret, and their two sons, and incited a massacre of Muslims. Originally, the older of these two sons, Roger IV, Duke of Apulia, was destined to be crowned in place of William, but soon the populace supported the accession of Simon himself. Before Simon could put himself forward as a candidate, however, the rebellion had broken down and the people were restless. The insurrectionists were forced to free the king and retreat to their castles. Pardon was given them on condition of exile and many, including Tancred, took the offer.

In 1174 Tancred led a large fleet to Egypt on behalf of William II. The Sicilians landed near Alexandria but when they realised that their expected allies would not be coming (due to King Amalric I of Jerusalem's death) and with Saladin's army approaching they returned to their ships and sailed home.[2]

As soon as William II died, in 1189, Tancred rebelled and seized control of the island. He was crowned early in 1190. His coup was backed by the chancellor Matthew d'Ajello and the official class, while the rival claims of his aunt Constance and her husband, Henry VI, King of the Romans, were supported by most of the nobles.

Tancred was a good soldier, though his tiny stature earned him the nickname "Tancredulus" from the poet chronicler Peter of Eboli. Despite a measure of popular support, his rule faced daunting challenges right from the start. In 1190 Richard I of England arrived in Sicily at the head of a large crusading army on its way to the Holy Land. Richard immediately demanded the release of his sister, William II's wife Joan, imprisoned by Tancred in 1189, along with every penny of her dowry and dower. He also insisted that Tancred fulfil the financial commitments made by William II to the crusade. When Tancred balked at these demands, Richard seized a monastery and the castle of La Bagnara.

Richard was joined in Sicily by the French crusading army, led by King Philip II. The presence of two foreign armies soon caused unrest among the locals. In October the people of Messina revolted, demanding that the foreigners leave the island. Richard responded by attacking Messina, which he captured on 4 October 1190. After the city had been looted and burned, Richard established his base there and decided to stay the winter.

Richard remained at Messina until March 1191, when Tancred finally agreed to a treaty. According to the treaty's main terms:

After signing the treaty Richard and Philip finally left Sicily for the Holy Land. It is rumoured that before he left, Richard gave Tancred a sword he claimed was Excalibur in order to secure their friendship.[3]

Having at last rid himself of the crusaders, Tancred next confronted the threat from the north. In April 1191 in Rome, Henry and Constance were crowned emperor and empress by Pope Celestine III, and now the pair turned south to claim the Kingdom of Sicily. Constance accompanied her husband at the head of a substantial imperial army that descended into the Regno. The northern towns of the kingdom opened their gates to Henry, including the earliest Norman strongholds Capua and Aversa. Salerno, once Roger II's mainland capital, sent word ahead that Henry was welcome and invited Constance to stay in her father's old palace to escape the summer heat. Naples offered the first resistance of the whole campaign, withstanding a siege with the help of Margaritus of Brindisi's fleet, until much of the army had succumbed to malaria and disease. Eventually the imperial army was forced to withdraw from the kingdom altogether. Constance remained in Salerno with a small garrison, as a sign that Henry would soon return.

Once Henry had withdrawn with the bulk of the imperial army, the towns that had supposedly fallen to the empire immediately declared their allegiance to Tancred, for the most part now fearing his retribution. The populace of Salerno saw an opportunity to win some favour with Tancred and delivered Constance to him in Messina, an important prize given that Henry had every intention of returning. However, Tancred was willing to give up his negotiation advantage, that is, his aunt, in exchange for Pope Celestine III legitimising him as King of Sicily. In turn, the Pope was hoping that by securing Constance's safe passage back to Rome, Henry would be better disposed towards the papacy, and he was still hoping to keep the empire and the kingdom from uniting. However, imperial soldiers were able to intervene before Constance made it to Rome, and they returned her safely across the Alps.

Henry had left garrisons along the frontiers of the Regno. Tancred now sought to win over the towns by extensive grants of privileges. At Gravina (June 1192) he reinforced his papal support by surrendering the royal legateship over Sicily. In 1192 and 1193 he personally led successful campaigns against the Apulian barons. But his death, at Palermo (20 February 1194), two months after that of his young son and co-king, Roger III, opened the way for Hohenstaufen rule in Sicily.[1]

His widow, Sibylla of Acerra, established a regency for their son, William III, but Henry returned to Italy later that year, his army financed by the lucrative ransom of Richard I. Naples surrendered in May, almost without a blow, and the rest of the Regno followed. Sybilla and the loyal Margaritus prepared to defend Palermo, but the citizens admitted the Emperor on 20 November 1194. Tancred's family fell into Henry's hands, and William III, rumoured castrated and blinded, seems to have died in Germany in 1198.[1]