From Infogalactic: the planetary knowledge core
Jump to: navigation, search
For other people with this name, see Tancred (disambiguation). 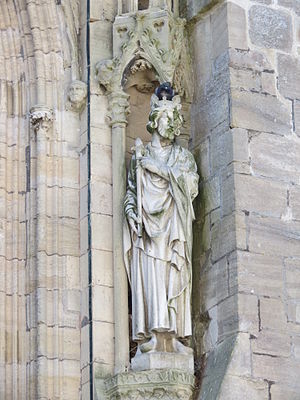 Possible statue of Tancred of Hauteville on the north side of Coutances Cathedral. This is an 1875 replacement for a statue damaged in the French Revolution.

Tancred of Hauteville (980 – 1041) was an 11th-century Norman petty lord about whom little is known. His historical importance comes entirely from the accomplishments of his sons and later descendants. He was a minor noble near Coutances in the Cotentin.

Various legends arose about Tancred which have no supporting contemporary evidence that has survived the ages.

The Hauteville family later was said to descend from Hiallt, a Norseman active in 920, who is credited with founding the village of Hialtus Villa (Hauteville) in the Cotentin of Normandy.[1][2] Tancred is a supposed descendant of Hiallt, from whom the village of Hauteville and the family drew their name. This cannot be identified with certainty, and some modern scholarship favours Hauteville-la-Guichard over Hauteville.[3]

With his two wives, he had twelve sons and several daughters, almost all of whom left Normandy for Southern Italy and acquired some prominence there. Based on late testimony of dubious reliability, both of his wives have been said to have been daughters of Duke Richard I of Normandy.[4])

With his first wife, Muriella, he had five sons and one daughter:

According to the Italian chronicler of the Norman feats in the south, Amatus of Montecassino, Tancred was a morally upright man, who would not carry on a sinful relationship and being unable also to live out his life in perfect celibacy, he remarried.

With his second wife, Fressenda (or Fredesenda), he had seven more sons and at least one daughter:

Other Tancred of Hauteville

Tancred's great-grandson, also bearing the same name, Tancred, Prince of Galilee, was a leader in the First Crusade. The line of succession was: