Tao-Klarjeti (Georgian: ტაო–კლარჯეთი) also referred as Kingdom of Georgians[1] (Georgian: ქართველთა სამეფო) was a medieval Georgian (Kartvelian) kingdom and principality, succeeding the Principality of Iberia, in what is now part of the provinces of Erzurum, Artvin, Ardahan and Kars in north-eastern Turkey.

Tao and Klarjeti were originally only the names of the two most important provinces of the Georgian lands that stretched from the "Georgian Gorge" (Turkish Gürcü Boğazı) in the south to the Lesser Caucasus in the north. 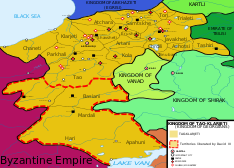 Historically, the area comprised the following provinces: West of the Arsiani Mountains (Turk. Yalnızçam Dağları) were Tao, Klarjeti, Nigali, and Shavsheti, to the east lay Samtskhe, Erusheti, Javakheti, Artaani and Kola. The landscape is characterised by mountains and the river-systems of the Chorokhi (Turk. Çoruh) and the Mtkvari (Turk. Kura). Tao-Klarjeti’s geographical position between the great Empires of the East and the West, and the fact that one branch of the Silk Road ran through its territory, meant that it was subject to a constant stream of diverging influences.

In the 9th to 11th centuries, Tao-Klarjeti was ruled by the Bagrationi dynasty, and the region played a crucial role in the unification of all Georgian lands and principalities into a single feudal state, Kingdom of Georgia in 1008. 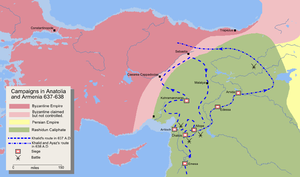 Caucasian Iberia became a disputed border region in the Arab–Byzantine wars of the 7th century.

The principalities of Tao-Klarjeti arose out of the turmoils of the Muslim conquests in the Caucasus in the 7th and 8th centuries, succeeding the early medieval kingdom of Caucasian Iberia. 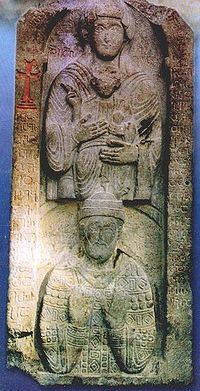 King David III Kuropalates of Tao-Klarjeti as depicted on a bas-relief from the 10th-century Georgian Orthodox monastery of Oshki in modern Erzurum Province of present-day Turkey.

The new era began in Tao-Klarjeti in 813, when the Georgian prince (erismtavari) Ashot I of the Bagrationi family made Klarjeti a base in his struggle against the Arab occupation. Recognizing the Byzantine suzerainty, he received a title of κουροπαλάτης and established the Principality of the Georgians known to the Byzantines as the Kouropalatate (Kuropalatinate) of Iberia. Ashot fought the Arabs from there, gradually incorporating the surrounding lands of Tao, Kola, Artaani and Shavsheti, along with a few other lesser lands, from the Arab dominance. He encouraged resettlement of Georgians in these lands, and patronized monastic life initiated by the prominent Georgian ecclesiastic figure Grigol Khandzteli (Gregory of Khandzta; 759–861) in Klarjeti. For a long time the region became a cultural safe-house and one of the most important religious centers of Georgia.

Ashot’s successors continued fighting for the Kartlian lands, contested also by the Abkhazian dynasty of western Georgia (Egrisi), the Arab emirs of Tbilisi and even by Kakhetian (kingdom in eastern Georgia) and Armenian rulers. However, internal feuds, not infrequent in the principality, were an important obstacle. A civil war following the assassination of David I (876–881) brought the victory of Adarnase I (881–923) over his major rival, Nasra, David’s murderer, allowing him to be crowned as King of the Georgians in 888. During the reign of Adarnase’s son David II (923–937) the Georgians had also to defend against the Byzantine aggression, a problem they seem to have successfully managed. However, the Bagrationi dynasty failed to maintain the integrity of their kingdom which was actually divided between the three branches of the family with the main branch retaining Tao and the title of King of the Kartvelians (Georgians), and another controlling Klarjeti and nominally recognizing the sovereignty of the king. The Kingdom of the Kartvelians (Kingdom of the Georgians) also included several other minor princedoms more or less dependent to the Tao crown.

In 958, Bagrat II Regueni, "the Simple" (958–994) was crowned King of the Georgians and inherited Northern Tao (also known as Amier-Tao), while David III (961–1000/1001) received a title of Kuropalates and got Southern Tao (also known as Imier-Tao) in possession. A just ruler and a friend of the church, David allied with the Byzantine Emperor Basil II to defeat the rebel Byzantine noble Bardas Skleros (976–979) and was rewarded with extensive lands that made him the most powerful ruler in the south Caucasus: his state included several Georgian and Armenian provinces up to the Lake Van. With the strong intention to unite all Georgian lands, he adopted Prince Bagrat (the future king Bagrat III), a grandchild of Bagrat Regueni, also being an Abkhazian heir apparent. David installed him as a residing prince in Kartli (975) and as king of Abkhazia (978), and helped Bagrat’s natural father Gurgen to be crowned as King of Kings of the Kartvelians on the death of Bagrat the Simple (994), thus making Bagrat a ruler of the two and a heir apparent of another two Georgian states. The only setback was the 987–989 unsuccessful conflict with the Byzantine Empire that forced David to agree to cede his dominion to Emperor Basil II on his death. Despite this reverse, Bagrat was able to become the first ruler of the unified Georgian kingdom (officially called the Kingdom of the Georgians and Abkhazians) on his father’s death in 1008.

The area continued to remain a Georgian territory and was administered by the princes of Samtskhe-Saatabago until conquered by the Ottomans in 1551. During their rule, a policy of Islamization was implemented and many of the Christian churches were converted into mosques. Following the Russian-Turkish war of 1877-1878, most of the former Tao-Klarjetian territory was ceded to the Russian Empire, but it was taken back by the Turks in the Brest-Litovsk Treaty with the Russian SFSR in 1918. The Ottoman defeat in World War I allowed the newly created Democratic Republic of Georgia to regain control of the region. Olti district, which was heavily contested between Georgians and Armenians had stayed under Turkish control. However, the nation’s independence soon collapsed under the Soviet Red Army attack in February 1921 and simultaneously the area was reoccupied by Turkey, a fact that was acknowledged by the Treaty of Moscow signed between the Turkish and Soviet governments on 16 March 1921.