Taqi ad-Din Muhammad ibn Ma'ruf ash-Shami al-Asadi (Arabic: تقي الدين محمد بن معروف الشامي, Modern Turkish: Takiyuddin or Taki) (1526–1585) was a Muslim polymath: He was the author of more than ninety books on a wide variety of subjects, including astronomy, clocks, engineering, mathematics, mechanics, optics and natural philosophy.[citation needed] In 1574 the Ottoman Sultan Murād III invited Taqī ad-Dīn to build the Istanbul observatory. Using his exceptional knowledge in the mechanical arts, Taqī ad-Dīn constructed instruments like huge armillary and mechanical clocks that he used in his observations of the Great Comet of 1577. He also used European celestial and terrestrial globes that were delivered to Istanbul in gift-exchange. The major work that resulted his work in the observatory is titled The tree of ultimate knowledge [in the end of time or the world] in the Kingdom of the Revolving Spheres: The astronomical tables of the King of Kings [Murād III](Sidrat al-muntah al-afkar fi malkūt al-falak al-dawār– al-zij al-Shāhinshāhi). The work was prepared according to the results of the observations carried out in Egypt and Istanbul in order to correct and complete Ulugh Beg’s Zij as-Sultani. The first 40 pages of the work deal with calculations, followed by discussions of astronomical clocks, heavenly circles, and information about three eclipses which he observed at Cairo and Istanbul. For corroborating data of other observations of eclipses in other locale like Daud ar-Riyyadi (David the Mathematician), David Ben-Shushan of Salonika. According to the Habsburg ambassador, Salomon Schweigger, Taqi ad-Din was a charlatan who deceived Sultan Murad III and had him spent enormous resources.[1]

Taqi ad-Din's method of finding coordinates of stars was reportedly more precise than those of his contemporaries, Tycho Brahe and Nicolas Copernicus. Brahe is thought to have been aware of Taqi ad-Din's work.[2]

In 1551, Taqi al-Din described a steam turbine with the practical application of rotating a spit.

Taqi ad-Din's ethnicity has been described as Arab,[3] Ottoman Turkish[2][4] and Syrian.[5] The Encyclopaedia of Islam makes no mention of his ethnicity, simply calling him, "..the most important astronomer of Ottoman Turkey".[6]

In 1551 Taqi al-Din described A rudimentary impact steam turbine In his work Al-Turuq al-samiyya fi al-alat al-ruhaniyya (The Sublime Methods of Spiritual Machines). He described a method for rotating a spit by means of a jet of steam playing on rotary vanes around the periphery of a wheel. Similar device for rotating a spit was also later described by John Wilkins in 1648.[7] These devices were then called "mills" but are now known as steam jacks.

In 1574 Taqi ad-Din proposed the new observatory to Sultan Murad III who, having an interest in astronomy, provided the financing for a new observatory to be built in Istanbul. He used errors in various astronomical tables as reasoning for the new project. His observatory, it is said, resembled Tycho Brahe’s observatory in many respects. A few months after opening, on the first day of Ramadan, a comet appeared in the night sky. This was unfortunate timing as the current Sultan was about to march on Persia and his fathers death had been heralded by a comet. It sat in the night sky for 40 nights growing slowly brighter. With this in mind he asked Taqi to use the observatory to figure out what the meaning of the apparition. Taqi noted that both the head and tail of the comet seemed to be pointing in the direction on Persia indicating that it was more of a bad omen for them and not for the Ottoman Empire. He also noted that the comet appeared in Sagittarius, which represented an Ottoman archer, and would set in Aquarius, which represented a time of peace. He strongly believed that this comet was a good sign for the Sultan and the Ottoman Empire in their march against Persia. While their armies did do well a plague broke out at roughly the same time. This caused political pressure against continued funding of the observatory. Grand Vizier Sokullu pushed for continued funding until his death in 1580. Without political protection, the observatory was torn down shortly after.[8] 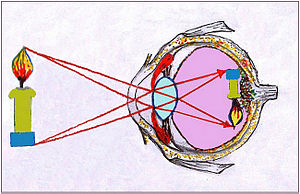 Diagram of the eye

Taqī al-Dīn, being an astronomer, was very familiar with optics and the behavior of light. From this he wrote a book called Takîyüddîn'in Optik Kitabi or Taqī al-Dīn's Book of Optics.[9] This book is written in three chapters. The first deals with the nature of vision, the second with reflection and then concludes with an understanding of refraction. He makes special note that his book is based on experimental evidence rather than being a conclusion drawn of previous works of literature. He also makes note that light is the same from all sources, contradicting Ibn al-Haytham. 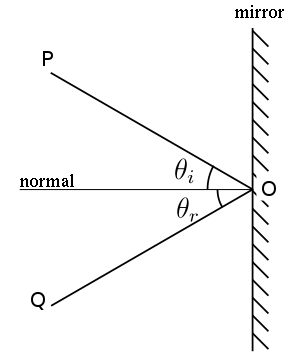 In the early Greek world there were two competing ideas of sight. One that rays emanated from the eyes onto an object and another that and object emanated light and our eyes only observed it. Both sides has their champions however Taqī al-Dīn was able to show experimentally that light emanates from an object and is then collected by our eyes. “According to him, if the ray of light had emerged from the eye, it would take too much time for us to see in the sphere of fixed stars.”[9] Since we can see the stars at night without any delay it is clear that light comes from them and not something we produce. From this he also argued that the color of the light is thus contained within the light of the object. He also argued that while light, emanating from a single point, may travel outward in a sphere the individual rays of light travel in straight lines. Finally he showed that the color of an object was produced by the reflection and refraction properties of an object.

Reflection itself was nothing new to the Islamic world and had been figured out for quite some time. However, any optics book that left out a section of reflective surfaces would be strikingly lacking. To this effect a section was included. He noted that rays of light being reflected off a mirror will propagate is a spherical form. As such, reflections of rays are a geometrical problem. It had been found that the incident ray, the reflected ray and the normal all lie in the same plane. It was also discovered that the angle of incidence and the angle of reflection were the same. The rays of light being emitted will also have the same color as the reflective surface.

Like reflection, refraction had been known about for some time. It was, however, a much more complicated problem that required further work. It was known that refracted light propagates in a spherical shell much as reflected light does and that it also takes on the color of the material through which it is traveling. It was also known that if a ray of light is traveling and goes from one medium to another that its angle will bend in a manner related to the density of the two materials. Like reflections the incident ray, the refracted ray and the normal all lie in the same place however the angle of refraction is always less than the angle of incidence. The only exceptions to this are perpendicular rays which do not in fact refract. Taqī al-Dīn did discover though that “the difference between the refraction angles of different incident rays is less than the difference between the angles of incidence.”[9] He also noted that “the ratio of the angle of the larger incident to its refraction angle is larger than the ratio of the angle of the smaller incident to its refraction angle.”[9] These are pretty much still our modern rules for optics and Taqī al-Dīn even tried to formulate Snell’s law although he was unsuccessful.[9]