From Infogalactic: the planetary knowledge core
Jump to: navigation, search
For other uses, see Taranis (disambiguation). 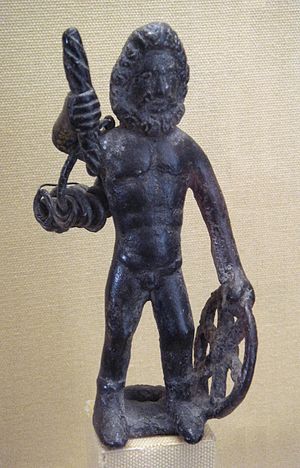 In Celtic mythology Taranis was the god of thunder worshipped essentially in Gaul, Gallaecia, the British Isles, but also in the Rhineland and Danube regions, amongst others. Taranis, along with Esus and Toutatis as part of a sacred triad, was mentioned by the Roman poet Lucan in his epic poem Pharsalia as a Celtic deity to whom human sacrificial offerings were made.[1] Taranis was associated, as was the cyclops Brontes ("thunder") in Greek mythology, with the wheel. 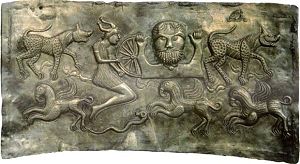 Gundestrup cauldron, created between 200 BC and 300 AD, is thought to have a depiction of Taranis on the inner wall of cauldron on tile C

Many representations of a bearded god with a thunderbolt in one hand and a wheel in the other have been recovered from Gaul, where this deity apparently came to be syncretised with Jupiter.[2]

The name as recorded by Lucan is unattested epigraphically, but variants of the name include the forms Tanarus, Taranucno-, Taranuo-, and Taraino-.[3][4] The name is continued in Irish as Tuireann[citation needed], and is likely connected with those of Germanic (Norse Thor, Anglo-Saxon Þunor, German Donar) and Sami (Horagalles) gods of thunder. Taranis is likely associated with the Gallic Ambisagrus (likely from Proto-Celtic *ambi-sagros = "about-strength"), and in the interpretatio romana with Jupiter.

The reconstructed Proto-Celtic form of the name is *Toranos "thunder".[5] In present day Welsh taranu and taran means 'to thunder' and 'thunder' (taraniñ and taran in Breton).

Association with the wheel

See also: Wheel of the Year 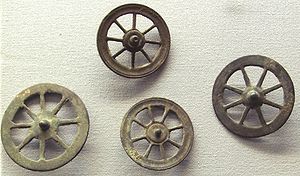 Votive wheels called Rouelles, thought to correspond to the cult of Taranis. Thousands of such wheels have been found in sanctuaries in Belgic Gaul, dating from 50 BC to 50 AD. Musée d'Archéologie Nationale.

The wheel, more specifically the chariot wheel with six or eight spokes, was an important symbol in historical Celtic polytheism, apparently associated with a specific god, known as the wheel-god, identified as the sky- sun- or thunder-god, whose name is attested as Taranis by Lucan.[8] Numerous Celtic coins also depict such a wheel. It is thought to correspond to a sun-cult practiced in Bronze Age Europe, the wheel representing the sun.[who?]
The half-wheel shown in the Gundestrup "broken wheel" panel also has eight visible spokes.

Symbolic votive wheels were offered at shrines (such as in Alesia), cast in rivers (such as the Seine), buried in tombs or worn as amulets since the Middle Bronze Age.[9] Such "wheel pendants" from the Bronze Age usually had four spokes, and are commonly identified as solar symbols or "sun cross". Artefacts parallel to the Celtic votive wheels or wheel-pendants are the so-called Zierscheiben in a Germanic context. The identification of the Sun with a wheel, or a chariot, has parallels in Germanic, Greek and Vedic mythology (see sun chariot).

In 2013 a British combat drone system developed by defence contractor BAE Systems was named Taranis in reference to the Celtic god.