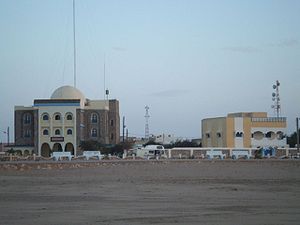 The town hall of Tarfaya 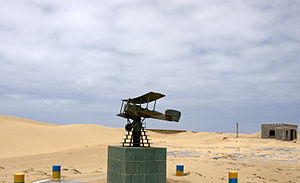 Monument dedicated to Antoine de Saint Exupéry, the author and the airport manager of L'Aéropostale at Cap Juby, just by Tarfaya 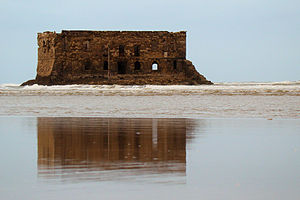 The fortress Casa del Mar, built by the British in the 1880s

Tarfaya (Arabic: طرفاية‎‎ - Ṭarfāya) is a town, previously also known as Villa Bens during the Spanish period, located in the Tarfaya Province of the Laâyoune-Sakia El Hamra region of southwestern Morocco.[1] It is a port town on the Atlantic coast, close to Cape Juby, which shares its name with the southern region of Morocco, and is located 890 km southwest of Rabat. According to the 2004 census, Tarfaya has a population of 5,615, the smallest of the four municipalities of the region, but it is the only one outside of the disputed Western Sahara.[2]

In the 1920s, the French commercial air carrier Aéropostale constructed an airfield here. A small monument now stands at that site to honour the air carrier, its pilots in general and the French aviator and author Antoine de Saint-Exupéry in particular. He served as station manager here during his career as an airmail pilot.

Tarfaya was occupied by the British in 1882, when they built a trading post called Casa del Mar.[3] The building is currently in a state of complete disrepair. The Sahrawi tribes[which?] then solicited the intervention of Sultan Hassan I who negotiated the withdrawal of the British in 1885 by acquiring their trading office.[citation needed] In 1912 the territory of Tarfaya, then named Cape Juby, was occupied by Spain as part of the Spanish Sahara. The greater Cape Juby region plus Tarfaya were unified with Morocco in 1958, at the end of the Ifni War.

In December 2014 the Tarfaya Wind Farm, largest wind farm in Africa, was commissioned.[4]

Tarfaya's association with Aéropostale began in 1927. The airmail carrier, based in Toulouse, France, was founded by French industrialist Pierre-Georges Latécoère, who envisioned an air route connecting France to its French colonies in Africa. Latécoère firmly believed in the future of aviation as a means of commercial transportation and communication between people.

The nearby Cape Juby airfield was an important refueling and stopover station for Aéropostale. Author-aviator Antoine de Saint-Exupéry was named its station manager in 1927. There he remained for 18 months, on occasion negotiating with the rebellious Moorish tribes to release his imprisoned pilots, as he wrote in his first novel, Southern Mail.

On 28 September 2004 a museum opened in honour of the memory of Aéropostale, Saint-Exupéry and its pilots, supported notably by the city of Toulouse and French aircraft maker Airbus. The museum was inaugurated by renowned aviation journalist Bernard Chabbert, whose father was also part of Aéropostale's history.

The town maintains an airport with the IATA code TFY.