From Infogalactic: the planetary knowledge core
Jump to: navigation, search
This article is about the Aramaic translation of the Hebrew Bible. For other uses, see Targum (disambiguation). 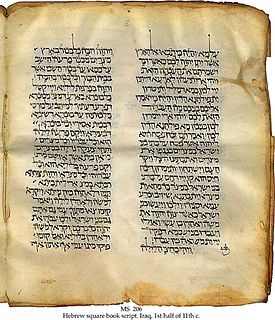 The targumim (singular: "targum", Hebrew: תרגום‎) were spoken paraphrases, explanations and expansions of the Jewish scriptures that a Rabbi would give in the common language of the listeners, which during the time of this practice was commonly, but not exclusively, Aramaic. This had become necessary near the end of the last century before the Christian era, as the common language was in transition and Hebrew was used for little more than schooling and worship.[1] Eventually it became necessary to give explanations and paraphrases in the common language after the Hebrew scripture was read. The noun Targum is derived from early semitic quadriliteral root 'trgm', and the Akkadian term 'targummanu' refers to "translator, interpreter".[2] It occurs in the Hebrew Bible in Ezra 4:18 "The document which you sent us has been read in translation (Aramaic—'mepares') before me".[2] Besides denoting the translations of the Bible, the term Targum also denote the oral rendering of Bible lections in synagogue,[2] while the translator of the Bible was simply called as hammeturgem (he who translates). Other than the meaning "translate" the verb Tirgem also means "to explain".[2] The word Targum refers to "translation" and argumentation or "explanation".[2]

Writing down the targum was prohibited; nevertheless, some targumatic writings appeared as early as the middle of the first century CE.[1] These were not recognized as authoritative by the religious leaders at that time, however.[3] Some subsequent Jewish traditions (beginning with the Babylonian Jews) did accept the written targumim as authoritative, and eventually this became a matter of debate. Today, only Jews from the republic of Yemen continue to use the targumim liturgically.

As translations, the targumim largely reflect midrashic interpretation of the Tanakh from the time they were written, and are notable for eschewing anthropomorphisms in favor of allegorical readings.[4] (Maimonides, for one, notes this often in The Guide for the Perplexed.) This is true both for those targumim that are fairly literal, as well as for those that contain many midrashic expansions.

In 1541, Elia Levita wrote and published Sefer Meturgeman, explaining all the Aramaic words found in the Targum.[5][6]

An Aramaic Bible is also used in the Syriac Church (see Peshitta). In addition, targumim are used today as sources in text-critical editions of the Bible (BHS refers to them with the abbreviation 𝔗).

The two most important targumim for liturgical purposes are:[citation needed]

These two targumim are mentioned in the Babylonian Talmud as targum dilan ("our Targum"), giving them official status. In the synagogues of talmudic times, Targum Onkelos was read alternately with the Torah, verse by verse, and Targum Jonathan was read alternately with the selection from Nevi'im (i.e., the Haftarah). This custom continues today in Yemenite Jewish synagogues. The Yemenite Jews are the only Jewish community to continue the use of Targum as liturgical text, as well as to preserve a living tradition of pronunciation for the Aramaic of the targumim (according to a Babylonian dialect).

Besides its public function in the synagogue, the Babylonian Talmud also mentions targum in the context of a personal study requirement: "A person should always review his portions of scripture along with the community, reading the scripture twice and the targum once" (Berakhot 8a–b). This too refers to Targum Onkelos on the public Torah reading and to Targum Jonathan on the haftarot from Nevi'im.

Medieval biblical manuscripts of the Tiberian mesorah sometimes contain the Hebrew text interpolated, verse-by-verse, with the targumim. This scribal practice has its roots both in the public reading of the Targum and in the private study requirement.

The two "official" targumim are considered eastern (Babylonian). Nevertheless, scholars believe they too originated in the Land of Israel because of a strong linguistic substratum of western Aramaic. Though these targumim were later "easternized", the substratum belying their origins still remains.

In post-talmudic times, when most Jewish communities had ceased speaking Aramaic, the public reading of Targum along with the Torah and Haftarah was abandoned in most communities, Yemen being a well-known exception.

The private study requirement to review the Targum was never entirely relaxed, even when Jewish communities had largely ceased speaking Aramaic, and the Targum never ceased to be a major source for Jewish exegesis. For instance, it serves as a major source in the Torah commentary of Shlomo Yitzhaki, "Rashi", and therefor has always been the standard fare for Ashkenaz's (French, central European, and German) Jews.

For these reasons, Jewish editions of the Tanakh which include commentaries still almost always print the Targum alongside the text, in all Jewish communities. Nevertheless, later halakhic authorities argued that the requirement to privately review the targum might also be met by reading a translation in the current vernacular in place of the official Targum, or else by studying an important commentary containing midrashic interpretation (especially that of Rashi).

The Talmud explicitly states that no official targumim were composed besides these two on Torah and Nevi'im alone, and that there is no official targum to Ketuvim ("The Writings"). An official targum was in fact unnecessary for Ketuvim because its books played no fixed liturgical role. The Talmud (Megilah 3a) states The Targum of the Pentateuch was composed by Onkelos the proselyte from the mouths of R. Eleazar and R. Joshua. The Targum of the Prophets was composed by Jonathan ben Uzziel under the guidance of Haggai, Zechariah and Malachi (Jonathan b. Uzziel was a disciple of Hillel, so he had traditions handed down from them-Maharsha), and the land of Israel [thereupon] quaked over an area of four hundred parasangs by four hundred parasangs, and a Bath Kol (heavenly voice) came forth and exclaimed, Who is this that has revealed My secrets to mankind? Jonathan b. Uzziel thereupon arose and said, It is I who have revealed Thy secrets to mankind. It is fully known to Thee that I have not done this for my own honour or for the honour of my father's house, but for Thy honour l have done it, that dissension may not increase in Israel. He further sought to reveal [by] a targum [the inner meaning] of the Hagiographa, but a Bath Kol went forth and said, Enough! What was the reason? Because the date of the Messiah is foretold in it". [A possible reference to the end of the book of Daniel.] But did Onkelos the proselyte compose the targum to the Pentateuch? Has not R. Ika said, in the name of R. Hananel who had it from Rab: What is meant by the text, Neh. VIII,8 "And they read in the book, in the law of God, with an interpretation. and they gave the sense, and caused them to understand the reading? And they read in the book, in the law of God: this indicates the [Hebrew] text; with an interpretation: this indicates the targum,..." (which shows that the targum dates back to the time of Ezra).

Nevertheless, most books of Ketuvim (with the exceptions of Daniel and Ezra-Nehemiah, which both contain Aramaic portions) have targumim, whose origin is mostly western (Land of Israel) rather than eastern (Babylonia). But for lack of a fixed place in the liturgy, they were poorly preserved and less well known. From Palestine, the tradition of targum to Ketuvim made its way to Italy, and from there to medieval Ashkenaz and Sepharad. The targumim of Psalms, Proverbs, and Job are generally treated as a unit, as are the targumim of the five scrolls (Esther has a longer "Second Targum" as well.) The targum of Chronicles is quite late, possibly medieval, and is attributed to a Rabbi Joseph.

Other Targumim on the Torah

There are also a variety of western targumim on the Torah, each of which was traditionally called Targum Yerushalmi ("Jerusalem Targum"). An important one of these was mistakenly labeled "Targum Jonathan" in later printed versions (though all medieval authorities refer to it by its correct name). The error crept in because of an abbreviation: the printer interpreted the abbreviation T Y (ת"י) to stand for Targum Yonathan (תרגום יונתן) instead of the correct Targum Yerushalmi (תרגום ירושלמי). Scholars refer to this targum as Targum Pseudo-Jonathan. To attribute this targum to Jonathan ben Uzziel flatly contradicts the talmudic tradition (Megillah 3a), which quite clearly attributes the targum to Nevi'im alone to him, while stating that there is no official targum to Ketuvim. In the same printed versions, a similar fragment targum is correctly labeled as Targum Yerushalmi.

Of these Targum Neofiti I is by far the largest. It consist of 450 folios covering all books of the Pentateuch, with only a few damaged verses. The history of the manuscript begins 1587 when the censor Andrea de Monte (d. 1587) bequeathed it to Ugo Boncompagni—which presents an oddity, since Boncompagni, better known as Pope Gregory XIII, died in 1585. The route of transmission may instead be by a certain "Giovan Paolo Eustachio romano neophito."[7] Before this de Monte had censored it by deleting most references to idolatry. In 1602 Boncompagni's estate gave it to the Collegium Ecclesiasticum Adolescentium Neophytorum (or Pia Domus Neophytorum, a college for converts from Judaism and Islam) until 1886, when the Vatican bought it along with other manuscripts when the Collegium closed (which is the reason for the manuscripts name and its designation). Unfortunately, it was then mistitled as a manuscript of Targum Onkelos until 1949, when Alejandro Díez Macho noticed that it differed significantly from Targum Onkelos. It was translated and published during 1968–79, and has since been considered the most important of the Palestinian Targumim, as it is by far the most complete and, apparently, the earliest as well.[8][9]

The Fragment Targums (formerly known as Targum Yerushalmi II) consist of a large number of fragments that have been divided into ten manuscripts. Of these P, V and L were first published in 1899 by M Ginsburger, A, B, C, D, F and G in 1930 by P Kahle and E in 1955 by A Díez Macho. Unfortunately, these manuscripts are all too fragmented to confirm what their purpose were, but they seem to be either the remains of a single complete targum or short variant readings of another targum. As a group, they often share theological views and with Targum Neofiti, which has led to the belief that they could be variant readings of that targum.[8][9]

The Cairo Genizah Fragment Targums originate from the Ben-Ezra Synagogues genizah in Cairo. They share similarities with The Fragment Targums in that they consist of a large number of fragmented manuscripts that have been collected in one targum-group. The manuscripts A and E are the oldest among the Palestinian Targum and have been dated to around the seventh century. Manuscripts C, E, H and Z contain only passages from Genesis, A from Exodus while MS B contain verses from both as well as from Deuteronomium.[8][9]

The Peshitta is the traditional Bible of Syriac-speaking Christians (who speak several different dialects of Aramaic). Many scholars[who?] believe that its Old Testament is based on rabbinic targumim, although influenced by the Septuagint, and it is generally reckoned to have been translated between 100 BCE and 100 CE.[citation needed]

Tadmor, H., 1991. "On the role of Aramaic in the Assyrian empire", in M. Mori, H. Ogawa and M. Yoshikawa (eds.), Near Eastern Studies Dedicated to H.I.H. Prince Takahito Mikasa on the Occasion of his Seventy-Fifth Birthday, Wiesbaden: Harrassowitz, pp. 419-426

Other sources on Targum