Tarifa is a small town in the province of Cádiz, Andalusia, on the southernmost coast of Spain. It is primarily known as one of the world's most popular destinations for wind sports. The town is located on the Costa de la Luz ("coast of light") and across the Straits of Gibraltar facing Morocco.

At exactly 36 degrees latitude, it is the second southernmost point of the European continent, situated south of both African capital cities of Tunis and Algiers. The greek island Gavdos , in Crete , is the southertnmost point of Europe .

The municipality includes Punta de Tarifa, the southernmost point in continental Europe. There are several villages which depend economically on Tarifa in the municipality, including Tahivilla, Facinas, and Bolonia.

It used to be thought that Tarifa was once the site of the Roman settlement of Julia Transducta (also known as Julia Joza, or just Transducta). However, that settlement is now thought to have been where Algeciras now stands, while Tarifa may have been the site of the settlement of Mellaria.[1][2] Tarifa was given its present name after the attack of Tarif ibn Malik in 710, a Berber military commander of Musa bin Nusayr.[3] The village of Bolonia near Tarifa was also populated in Roman times (called Baelo Claudia). Roman ruins still exist near the village today.

After the Islamic conquest of southern Spain, the city was fortified starting from the 10th century. Later Tarifa was held by the taifa of Algeciras (1031) and by that of Seville (1057), and subsequently by the Almoravids. After the latter's fall, it lived a short period under another taifa of Algeciras (1231), until becoming part of the Kingdom of Granada. In 1292 it was conquered by Sancho IV of Castile, and two years later it resisted a siege by North African Islamic troops. The town resisted another siege in 1340 from Moroccan troops, eventually leading to the Battle of Río Salado.

In 1514 it became the seat of a marquisate, including also Bornos, Espera and Alcalá de los Gazules.

In the course of the Peninsular War, Tarifa was besieged by French troops on 20 December 1810, and again on 18 December 1811. In both of these cases the town was defended by British troops from Gibraltar as the Spanish and British were allies against the French. During the 1811–12 Siege of Tarifa there were 3,000 defending troops with 1,200 of those British, including Colonel Charles Holloway who as commanding Royal Engineer made improvements to Tarifa's defences.

On 19 December the town was attacked again by General Laval, who bombarded the town over Christmas to the point where surrender was demanded on the 30 December. Both the British and Spanish commanders refused to comply and their defiance was rewarded by rain that started the next day. By 5 January the attacking force realised that their powder was wet and their guns were bogged down in mud, and retreated.[4]

Tarifa is sometimes credited with being the origin of the word "tariff", since it was the first port in history to charge merchants for the use of its docks, but other sources[5] point to the Arabic word ta'rïf, as the origin. The name "Tarifa" itself is derived from the name of the Berber warrior, Tarif ibn Malik. 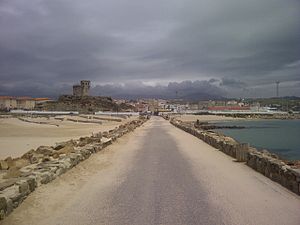 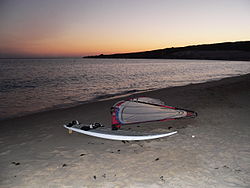 Historical landmarks of the city include:

Tarifa has become a popular spot for northern-Europeans to spend their summers. The coast of Tarifa is also popular with windsurfers and kitesurfers due to the strong winds of the straits. For this reason Tarifa is also dotted with hundreds of wind turbines.

Tarifa is a renowned place to watch migrating birds, in particular the storks which cross the Straits of Gibraltar in spring and autumn. Also whale and dolphin watching can be done on the 14 kilometer wide Straits.

Tarifa is renowned for its African Film Festival, whose first edition took place in 2004.

Tarifa features a Mediterranean climate with Oceanic influences, with warm summers and very mild winters. Rain is concentrated in winter, with the summers being largely dry. Because of its proximity to the Atlantic Ocean, precipitation in the wet period is quite high; monthly averages exceed 80mm in the two wettest months, December and January. The influence of the ocean has the additional effect of creating a very small annual variation in temperature. Winters are much warmer than those of continental Spain - a phenomenon also due to its southerly location - and summers are cooler than most of the country - the average daily high in the hottest month, August, is only 24 °C, significantly cooler than the temperatures experienced further inland in the Guadalquivir valley, and also a little cooler than those felt further east along the Mediterranean coast in places such as Málaga and Almería and even further west in Huelva and the Algarve coast of Portugal, as well as nearby Gibraltar and Tanger, which renders Tarifa to be an extreme microclimate.