From Infogalactic: the planetary knowledge core
Jump to: navigation, search
See also Protective Tariffs for the policies of using tariffs, and tariff (disambiguation) for other uses.

A tariff is a tax on imports or exports (an international trade tariff). In other languages and very occasionally in English, "tariff" or its equivalent may also be used to describe any list of prices (electrical tariff, etc.).

The small Spanish town of Tarifa is sometimes credited with being the origin of the word "tariff", since it was the first port in history to charge merchants for the use of its docks[1] The name "Tarifa" itself is derived from the name of the Berber warrior, Tarif ibn Malik. However, other sources assume that the origin of tariff is the Italian word tariffa translated as "list of prices, book of rates," which is derived from the Arabic ta'rif meaning "making known" or "to define".[2]

In the Kingdom of England, customs duties were typically part of the customary revenue of the king, and therefore did not need parliamentary consent to be levied, unlike excise duty, land tax, or other forms of taxes. This is no longer the case.

Customs duty is calculated on the determination of the assessable value in case of those items for which the duty is levied ad valorem. This is often the transaction value unless a customs officers determines assessable value in accordance with the Harmonized System.

However, for certain items like petroleum and alcohol, customs duty is realized at a specific rate applied to the volume of the import or export consignments.

For the purpose of assessment of customs duty, products are given an identification code that has come to be known as the Harmonized System code. This code was developed by the World Customs Organization based in Brussels. A Harmonized System code may be from four to ten digits. For example, 17.03 is the HS code for molasses from the extraction or refining of sugar. However, within 17.03, the number 17.03.90 stands for "Molasses (Excluding Cane Molasses)".

Introduction of Harmonized System code in 1990s has largely replaced the Standard International Trade Classification (SITC), though SITC remains in use for statistical purposes. In drawing up the national tariff, the revenue departments often specifies the rate of customs duty with reference to the HS code of the product. In some countries and customs unions, 6-digit HS codes are locally extended to 8 digits or 10 digits for further tariff discrimination: for example the European Union uses its 8-digit CN (Combined Nomenclature) and 10-digit TARIC codes.

A Customs authority in each country is responsible for collecting taxes on the import into or export of goods out of the country. Normally the Customs authority, operating under national law, is authorized to examine cargo in order to ascertain actual description, specification volume or quantity, so that the assessable value and the rate of duty may be correctly determined and applied.

Many countries allow a traveller to bring goods into the country duty-free. These goods may be bought at ports and airports or sometimes within one country without attracting the usual government taxes and then brought into another country duty-free. Some countries impose allowances which limit the number or value of duty-free items that one person can bring into the country. These restrictions often apply to tobacco, wine, spirits, cosmetics, gifts and souvenirs. Often foreign diplomats and UN officials are entitled to duty-free goods. Duty-free goods are imported and stocked in what is called a bonded warehouse.

With many methods and regulations, businesses at times struggle to manage the duties. In addition to difficulties in calculations, there are challenges in analyzing duties; and to opt for duty free options like using a bonded warehouse.

Companies use ERP software to calculate duties automatically to, on one hand, avoid error-prone manual work on duty regulations and formulas and on the other hand, manage and analyze the historically paid duties. Moreover, ERP software offers an option for customs warehouse, introduced to save duty and VAT payments. In addition, the duty deferment and suspension is also taken into consideration. 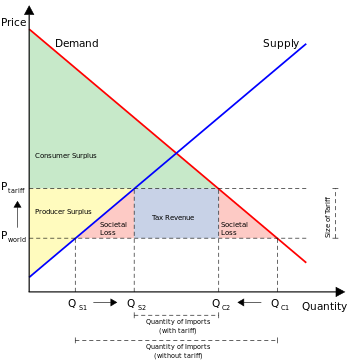 Neoclassical economic theorists tend to view tariffs as distortions to the free market. Typical analyses find that tariffs tend to benefit domestic producers and government at the expense of consumers, and that the net welfare effects of a tariff on the importing country are negative. Normative judgements often follow from these findings, namely that it may be disadvantageous for a country to artificially shield an industry from world markets and that it might be better to allow a collapse to take place. Opposition to all tariff aims to reduce tariffs and to avoid countries discriminating between differing countries when applying tariffs. The diagrams to the right show the costs and benefits of imposing a tariff on a good in the domestic economy.

(Diagram 2.). This curve makes the assumption that the international supply of the good or service is perfectly elastic and that the world can produce at a near infinite quantity of the good. Before the tariff, there is a demand of Qc1 (diagram 1) or D (diagram 2). The difference in demand (between S and D on diagram 2) was filled by importing from abroad. This is shown on diagram 1 as Quantity of Imports (without tariff). After the imposition of a tariff, domestic price rises, but foreign export prices fall due to the difference in tax incidence on the consumers (at home) and producers (abroad).

The new price level at Home is Ptariff or Pt, which is higher than the world price. More of the good is now produced at Home – it now makes Qs2 (diagram 1) or S' (diagram 2) of the good. Due to the higher price, only Qc2 or D* of the good is demanded by Home. The difference between the supply and demand is still filled by importing from abroad. However, the imposition of the tariff reduces the quantity of imports from SD to S*D* (diagram 2). This is also shown on Diagram 1 as Quantity of Imports (with tariff).

Domestic consumers face a higher price, reducing their welfare. Consumer surplus is the area between the price line and the demand curve. Therefore, the consumer surplus shrinks from the area above Pw to the area above Pt, i.e. it shrinks by the areas A, B, C and D. This includes the gained producer surplus, the deadweight loss, and the tax revenue.

The government gains from the taxes. It charges an amount PtPt' of tariff for every good imported. Since S*D* goods are imported, the government gains an area of C and E. However, there is a Deadweight loss of the triangles B and D, or in Diagram 1, the triangles labeled Societal Loss. Deadweight loss is also called efficiency loss. This cost is incurred because tariffs reduce the incentives for the society to consume and produce.

or graphically, this gain is given by the areas shown by:

That is, tariffs are beneficial to the society if the area given by the rectangle E is greater than the deadweight loss. Rectangle E is called the terms of trade gain.

The model above is completely accurate only in the extreme case where no consumer belongs to the producers group and the cost of the product is a fraction of their wages. If the opposite extreme is taken, assuming that all consumers come from the producers' group, consumers' only purchasing power comes from the wages earned in production, and the product costs their whole wage, the graph looks radically different. Without tariffs, only those producers/consumers able to produce the product at the world price will have the money to purchase it at that price.[citation needed]

The tariff has been used as a political tool to establish an independent nation; for example, the United States Tariff Act of 1789, signed specifically on July 4, was called the "Second Declaration of Independence" by newspapers because it was intended to be the economic means to achieve the political goal of a sovereign and independent United States.[3]

The political impact of tariffs is judged depending on the political perspective,; for example the 2002 United States steel tariff imposed a 30% tariff on a variety of imported steel products for a period of three years and American steel producers supported the tariff.[4] The move was criticised by the Cato Institute, a libertarian think tank.[5]

Tariffs can emerge as a political issue prior to an election. In the leadup to the 2007 Australian Federal election, the Australian Labor Party announced it would undertake a review of Australian car tariffs if elected.[6] The Liberal Party made a similar commitment, while independent candidate Nick Xenophon announced his intention to introduce tariff-based legislation as "a matter of urgency".[7]

Unpopular tariffs are known to have ignited social unrest, for example the 1905 meat riots in Chile that developed in protest against tariffs applied to the cattle imports from Argentina.[8][9]

When tariffs are an integral element of a country's technology strategy, some economist believe that such tariffs can be highly effective in helping to increase and maintain the country's economic health. Other economists might be less enthusiastic, as tariffs may reduce trade and there may be many spillovers and externalities involved with trade and tariffs. The existence of these externalities makes the imposition of tariffs a rather ambiguous strategy. As an integral part of the technology strategy, tariffs are effective in supporting the technology strategy's function of enabling the country to outmaneuver the competition in the acquisition and utilization of technology in order to produce products and provide services that excel at satisfying the customer needs for a competitive advantage in domestic and foreign markets. The notion that government and policy would be effective at finding new and infant technologies, rather than supporting existing politically motivated industry, rather than, say, international technology venture specialists, is however, unproven.

This is related to the Infant industry argument.

In contrast, in economic theory tariffs are viewed as a primary element in international trade with the function of the tariff being to influence the flow of trade by lowering or raising the price of targeted goods to create what amounts to an artificial competitive advantage. When tariffs are viewed and used in this fashion, they are addressing the country's and the competitors' respective economic healths in terms of maximizing or minimizing revenue flow rather than in terms of the ability to generate and maintain a competitive advantage which is the source of the revenue. As a result, the impact of the tariffs on the economic health of the country are at best minimal but often are counter-productive.

A program within the US intelligence community, Project Socrates, that was tasked with addressing America's declining economic competitiveness, determined that countries like China and India were using tariffs as an integral element of their respective technology strategies to rapidly build their countries into economic superpowers. However, the US intelligence community, tends to have limited inputs into developing US trade policy. It was also determined that the US, in its early years, had also used tariffs as an integral part of what amounted to technology strategies to transform the country into a superpower.[10]