The Tariff of 1828 was a protective tariff passed by the Congress of the United States on May 19, 1828, designed to protect industry in the northern United States. Created during the presidency of John Quincy Adams and enacted during the presidency of Andrew Jackson, it was labeled the "Tariff of Abominations" by its southern detractors because of the effects it had on the antebellum Southern economy. It set a 38% tax on 92% of all imported goods.

Industries in the northern United States were being driven out of business by low-priced imported goods; the major goal of the tariff was to protect these industries by taxing those goods. The South, however, was harmed directly by having to pay higher prices on goods the region did not produce, and indirectly because reducing the exportation of British goods to the U.S. made it difficult for the British to pay for the cotton they imported from the South.[1] The reaction in the South, particularly in South Carolina, led to the Nullification Crisis.[2] The tariff marked the high point of U.S. tariffs in terms of average percent of value taxed,[3] though not resulting revenue as percent of GDP.[4]

Passage of the bill

The 1828 tariff was part of a series of tariffs that began after the War of 1812 and the Napoleonic Wars, when the blockade of Europe led British manufacturers to offer goods in America at low prices that American manufacturers often could not match. The first protective tariff was passed by Congress in 1816; its tariff rates were increased in 1824. Southern states such as South Carolina contended that the tariff was unconstitutional and were opposed to the newer protectionist tariffs, but Western agricultural states favored them, as well as New England's industries.[5]

In an elaborate scheme to prevent passage of still higher tariffs, while at the same time appealing to Andrew Jackson's supporters in the North, John C. Calhoun and other southerners joined them in crafting a tariff bill that would also weigh heavily on materials imported by the New England states. It was believed that President John Quincy Adams's supporters in New England, the National Republicans, or as they would later be called, Whigs, would uniformly oppose the bill for this reason and that the southern legislators could then withdraw their support, killing the legislation while blaming it on New England.

What that plan was, Calhoun explained very frankly nine years later, in a speech reviewing the events of 1828 and defending the course taken by himself and his southern fellow members. A high-tariff bill was to be laid before the House. It was to contain not only a high general range of duties, but duties especially high on those raw materials on which New England wanted the duties to be low. It was to satisfy the protective demands of the Western and Middle States, and at the same time to be obnoxious to the New England members. The Jackson men of all shades, the protectionists from the North and the free-traders from the South, were to unite in preventing any amendments; that bill, and no other, was to be voted on. When the final vote came, the southern men were to turn around and vote against their own measure. The New England men, and the Adams men in general, would be unable to swallow it, and would also vote against it. Combined, they would prevent its passage, even though the Jackson men from the North voted for it. The result expected was that no tariff bill at all would be passed during the session, which was the object of the southern wing of the opposition. On the other hand, the obloquy of defeating it would be cast on the Adams party, which was the object of the Jacksonians of the North. The tariff bill would be defeated, and yet the Jackson men would be able to parade as the true "friends".[6]

Southern opponents generally felt that the protective features of tariffs were harmful to southern agrarian interests and claimed they were unconstitutional because they favored one sector of the economy over another.[citation needed] New England importers and ship owners also had reason to oppose provisions targeting their industries—provisions inserted by Democratic Party legislators to induce New England constituents to sink the legislation.[citation needed]

Those in Western states and manufacturers in the Mid-Atlantic States argued that the strengthening of the nation was in the interest of the entire country.[citation needed] This same reasoning swayed two-fifths of U.S. Representatives in the New England states to vote for the tariff increase:

A substantial minority of New England Congressmen (41%) saw what they believed to be long-term national benefits of an increased tariff, and voted for it; they believed the tariff would strengthen the manufacturing industry nationally (see table).[8]

The Democratic Party had miscalculated: despite the insertion by Democrats of import duties calculated to be unpalatable to New England industries, most specifically on raw wool imports, essential to the wool textile industry, the New Englanders failed to sink the legislation, and the Southerners' plan backfired.[8]

The 1828 tariff was signed by President Adams, although he realized it could weaken him politically.[9] In the presidential election of 1828, Andrew Jackson defeated Adams with a popular tally of 642,553 votes and an electoral count of 178 as opposed to Adams's 500,897 tally and 83 electoral votes.

Effects of the tariff 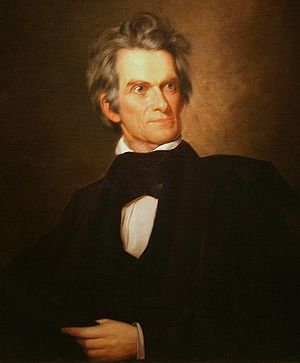 The expectation of the tariff's opponents was that with the election of Jackson in 1828, the tariff would be significantly reduced.[12][13] When the Jackson administration failed to address its concerns, the most radical faction in South Carolina began to advocate that the state itself declare the tariff null and void within South Carolina.[citation needed]

In Washington, an open split on the issue occurred between Jackson and Vice-President Calhoun.[13][14][15] On July 14, 1832, Jackson signed into law the Tariff of 1832 which made some reductions in tariff rates.[citation needed] Calhoun resigned on December 28 of the same year.[16]

The reductions were too little for South Carolina. In November 1832 the state called for a convention.[citation needed] By a vote of 136 to 26, the convention overwhelmingly adopted an ordinance of nullification drawn by Chancellor William Harper.[citation needed] It declared that the tariffs of both 1828 and 1832 were unconstitutional and unenforceable in South Carolina.[17] While the Nullification Crisis would be resolved with a compromise known as the Tariff of 1833, tariff policy would continue to be a national political issue between the Democratic Party and the newly emerged Whig Party for the next twenty years.[citation needed]