Taro cake (simplified Chinese: 芋头糕; traditional Chinese: 芋頭糕; Jyutping: wu6 tau4 gou1) is a Chinese dish made from the vegetable taro. While it is denser in texture than radish cakes, both these savory cakes made in a similar ways, with rice flour as the main ingredient. When served in dim sum cuisine, it is cut into square-shaped slices and pan-fried before serving. It is found in Hong Kong, China, and overseas Chinatowns restaurants. Other ingredients often include pork and Chinese black mushroom, or even Chinese sausages.[1] It is usually topped with chopped scallions.

The pan fried square taro cake is semi-crunchy on the outside and medium-soft on the inside. It is also the most consistent version with more or less the same formula in East and Southeast Asia, or among overseas Chinese communities.

The other version is the more home-style baked version. Usually it uses the same ingredients and steamed for long periods of time in a deep pan until it is ultra soft and pasty. The formula varies greatly depending on the family recipe or regional tastes.

Some restaurants offer taro cakes cut into small cubes as part of a main course appetizer to a major Chinese cuisine. These are sometimes frozen to a more solid state, though it is not nearly as common as the other forms. 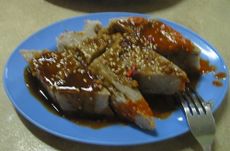 A similar dish is prepared in the cuisine of Vietnam, where it is called bánh khoai môn.

Taro cake, is sometimes referred to as yam cake, which is made from taro and not from yam due to the mistranslation in Malaysia and Singapore.