Tarpon Springs is a city in Pinellas County, Florida, United States. The population was 23,484 at the 2010 census.[4] Tarpon Springs has the highest percentage of Greek Americans of any city in the US.[5] Downtown Tarpon has long been a focal point and is currently undergoing beautification.[6]

The region, with a series of bayous feeding into the Gulf of Mexico, was first settled by white and black farmers and fishermen around 1876. Some of the newly arrived visitors spotted tarpon jumping out of the waters and so named the location Tarpon Springs. In the 1880s, it was developed as a wintering spot for wealthy northerners. During the same decade, John Cheyney founded the first local sponge business. The industry continued to grow in the 1890s, and many blacks and whites from Key West and the Bahamas settled in Tarpon Springs to harvest and process sponges. A few Greek immigrants arrived in this city during the 1890s to work in the sponge industry. 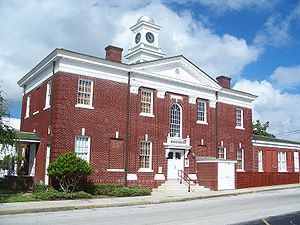 In 1905, John Cocoris introduced the technique of sponge diving to Tarpon Springs and recruited divers and crew members from Greece. The first divers came from the Saronic Gulf islands of Aegina and Hydra, but they were soon outnumbered by those from the Dodecanese islands of Kalymnos, Symi and Halki. The sponge industry soon became one of the leading maritime industries in Florida and the most important business in Tarpon Springs, generating millions of dollars a year. The 1953 film Beneath the 12-Mile Reef, depicting the sponge industry, takes place and was filmed in Tarpon Springs.[7]

In 1947, a red tide algae bloom wiped out the sponge fields in the Gulf of Mexico, causing many of the sponge boats and divers to switch to fishing shrimping for their livelihood, while others left the business. Eventually, the sponges recovered, allowing for a smaller but consistent sponge industry today. In the 1980s, the sponge business experienced a boom due to a sponge disease that killed the Mediterranean sponges. Today there is still a small active sponge industry. Visitors can often view sponge fishermen working at the Sponge Docks on Dodecanese Boulevard. In addition, visitors can enjoy shops, restaurants, and museum exhibits that detail Tarpon Springs' Greek heritage.

In 2007 and 2008, the City of Tarpon Springs established Sister City relationships with Kalymnos, Halki, Symi, and Cyprus, honoring the close historical link with these Greek-speaking islands. 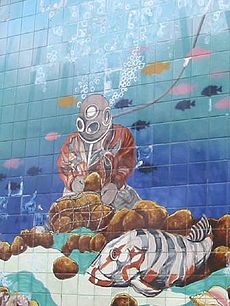 There are several locations in Tarpon Springs which have been listed on the National Register of Historic Places:

Many sites related to the sponge industry within the Greektown District have also been recognized. They include but are not limited to two packing houses: 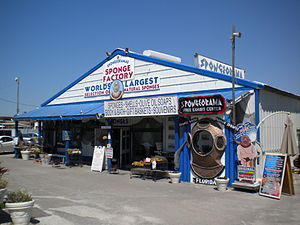 Dodecanese Avenue in the Greektown Historic District of Tarpon Springs is still thriving as both a traditional community and a tourist destination. The street winds its way from Pinellas Avenue west along the Anclote River. Along the way it passes the marina, the sponge boats docked along the Sponge Docks on the north side of the street and the Sponge Exchange on the south side of the street, west to the boats docked outside Pelican Point Seafood. Numerous restaurants serve traditional Greek cuisine and fresh seafood. There are also small shops that sell everything from natural sponges to imported goods. Along the working waterfront street, locals greet each other in Greek and stop to chat without regard to the traffic.

The nearby beaches, part of the Pinellas County parks, are popular for swimming, windsurfing, picnics, boating, and other water sports. People also come to the beaches to watch the beautiful sunsets over the Gulf of Mexico. Sandy barrier islands off shore shift position over time with the waves and storms. They are accessible by boat and are especially ideal for shell spotting and watching bottlenose dolphins at play. One permanent island, Anclote Key, is a State Park Preserve with a historic lighthouse, bird nesting colonies and pristine beaches.

The Tarpon Springs Heritage Museum in Craig Park offers an exhibition about the history and culture of the Greek Community. The Cultural Center at 101 W. Pinellas Avenue has a changing roster of exhibits of local interest. The Safford House Museum on Parkin Court is a historical house museum that tells the fascinating story of one of the city's early families. The Depot Museum on Tarpon Avenue provides an overview of Tarpon Springs history.

Tarpon Springs is known for elaborate religious ceremonies hosted by the St. Nicholas Greek Orthodox Church, part of the Greek Orthodox Church, including the January 6 Epiphany, celebration that includes youths diving for a cross and the blessing of the waters and the boats. Since the first Greek immigrants depended on the sea and their boats for their livelihood, their attachment to a religious service centered on requesting divine protection for what used to be a highly risky job can be easily explained.

The celebration attracts Greek Americans from across the country, and the city's population is known to triple in size for that day. The Metropolitan of Atlanta usually presides over the blessings, sometimes joined by the Archbishop of America. The blessings conclude with the ceremonial throwing of a wooden cross into the city's Spring Bayou, and boys ages 16 to 18 dive in to retrieve it: whoever recovers the cross is said to be blessed for a full year.[8] Following the blessings, the celebration moves to the Sponge Docks where food and music are made part of the festivities. 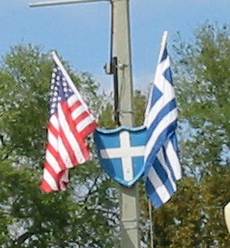 There were 9,067 households out of which 22.8% had children under the age of 18 living with them, 52.2% were married couples living together, 10.0% had a female householder with no husband present, and 34.4% were non-families. 29.2% of all households were made up of individuals and 14.6% had someone living alone who was 65 years of age or older. The average household size was 2.27 and the average family size was 2.78.