Tarraco is the ancient name of the current city of Tarragona (Catalonia, Spain). It was the oldest Roman settlement on the Iberian Peninsula, founded during the Second Punic War[1] by Scipio Calvus, and became capital of the Roman province of Hispania Citerior, and of Hispania Tarraconensis during the Roman Empire.

In 2000, the archaeological ensemble of Tarraco was declared a World heritage site by UNESCO.

Origins and the Second Punic War 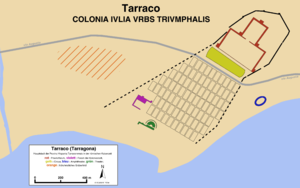 Plan of Tarraco in imperial times showing the main buildings 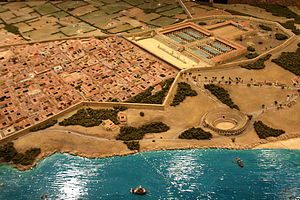 Model of Tarraco in imperial times, located in the remains of the provincial forum 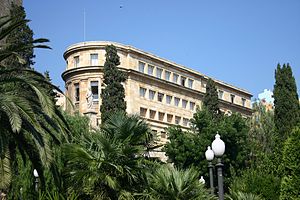 The main remains of the Roman city preserved in the Museu Nacional Arqueològic de Tarragona (MNAT).

References in the literature to the presence of Iberians in Tarraco are ambiguous. Livy mentions an oppidum parvum (small town) called Cissis and Polybius talks about a polis called Kissa (Κίσσα).[2] Tarraco is mentioned for first time shortly after the arrival of Gnaeus Cornelius Scipio Calvus at Empúries in 218 BC at the start of the Second Punic War which began the Roman conquest of Hispania. Livy writes that the Romans conquered a field of Punic supplies for Hannibal's troops near Cissis and took the city. A short time later, the Romans were attacked "not far from Tarraco" (haud procul Tarracone[3]). But it remains unclear whether Cissis and Tarraco were the same city. A coin found in Empúries bears the inscription Tarakon-salir (salir probably means silver). The coin, engraved in keeping with other Empúries models at an undisclosed location, is generally dated to 250 BC, certainly before the arrival of the Romans. The name Kesse appears on coins of Iberian origin from the 1st and 2nd century BC that were marked according to Roman weight standards. Kesse may be equated with Cissis, the place of origin of the Cissisians mentioned by Pliny.[4]

In 217 BC reinforcements arrived from Italy under the command of Publius Scipio, and he and his brother Gnaeus Cornelius are attributed with the fortification of Tarraco and the establishment of a military port, and as Pliny the Elder said: Tarraco Scipionum opus, Tarraco was work by the Scipios as Carthage was by the Carthaginians.[4] The Roman city wall was probably constructed on top of the more ancient wall characteristic of the Iberian stonemason.

After the death of the Scipio brothers, Tarraco was 25-year-old Scipio Africanus's (son of Publius) winter base between 211 and 210,[5] and where he met the tribes of Hispania in conventus.[6] The population was largely loyal to the Romans during the war. Livy called them allies and friends of the Roman people (socii et amici populi Romani) and the fishermen of Tarraco (piscatores Tarraconenses) served with their boats during the siege of Carthago Nova.[7] 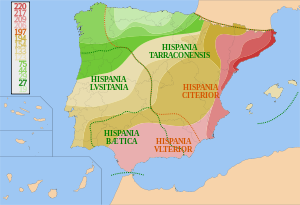 The conquest of the Iberian Peninsula by the Romans took over 200 years.

The conquest of the Iberian Peninsula by the Romans took over 200 years.

Tarraco during the Roman Republic

During the following two centuries Tarraco remained a supply and winter base camp during the wars against the Celtiberians, as it was during the Second Punic War. There was therefore a strong military presence during this period, possibly in the highest area of what is currently the city's historic quarter, called the Part Alta. In 197 BC, all of the conquered areas, even narrow strips along the coast of Spain, were divided between the new provinces of Hispania Ulterior and Hispania Citerior. The capital of Hispania Citerior was principally Carthago Nova but Strabo says that the governors also resided in Tarraco.[8] 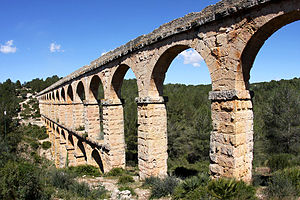 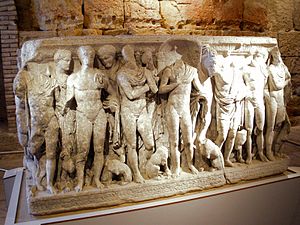 Sarcophagus preserved in the circus and forum museum.

The legal status of Tarraco is not entirely clear. It was probably organized as conventus civium Romanorum (convent = meeting of Roman citizens of the province) during the Republic, with two magistri (civilian directors) at its head. Gaius Porcius Cato, consul in the year 114 BC, chose Tarraco as the place of his exile in the year 108, indicating that Tarraco was a free city or perhaps an ally at that time.

According to Strabo, one of the "most recent" of the Roman battles took place not far from Tarraco.[9] When Caesar conquered supporters of Pompey in 49 BC in Ilerda (Lleida), Tarraco supported his army with food.[10] It is not entirely clear whether Tarraco received the status of colony at the hand of Julius Caesar or Augustus, but current research tends to assume that was the former who granted it after his victory in Munda, around the year 45BC, and reflected in the epithet Iulia in its formal name: Colonia Iulia Urbs Triumphalis Tarraco, which would remain for the duration of the Empire.[11]

The period of Augustus 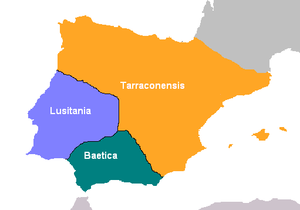 Hispanic provinces after the reform of Augustus.

In 27 BC, Emperor Augustus went to Spain to monitor the campaigns in Cantabria. However, due to his poor health he preferred to stay in Tarraco.[12] Apparently, Augustus had built an altar in the city, and a story by the rhetorician Quintilian mentions that the inhabitants of Tarraco complained to Augustus that a palm tree had grown on the altar. He replied that would mean it was not used very often.[13] 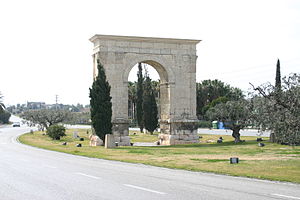 Arc de Berà in the Via Augusta, about 20 km north of Tarraco.

Soon after he arrived the old via Herculea became the Via Augusta. A milestone, found in Tarragona's Plaça de Braus, mentions the road between 12 and 6 BC, leading to Barcino to the north-east and Dertosa, Saguntum and (Valentia) to the south.

The city flourished under Augustus. The writer Pomponius Mela describes it in the 1st century AD as follows: "Tarraco is the richest port on this coast" (Tarraco urbs est en his oris maritimarum opulentissima).[14] Tarraco under Augustus and Tiberius minted its own coins with depictions of the imperial cult and the inscription CVT, CVTT o CVTTAR.[15]

After the death of Augustus in the year 14 AD, the emperor was officially deified and in 15 AD a temple was erected in his honour, probably in the eastern-most neighbourhood of the city or near the Colonial Forum, as mentioned by Tacitus in his annales.[16]

The city during the high empire

In 68 AD Galba, who lived in Tarraco for eight years, was proclaimed emperor in Clunia Sulpicia. Vespasian began a reorganization of the precarious finances of the state. According to Pliny, this allowed Latin citizenship to be granted to the inhabitants of Hispania.[17] The Spanish territory, which since ancient times consisted of urban areas and a land divided by tribal organizations, was transformed into areas organized around urban centers, whether in colonies or municipalities, thereby facilitating tax collection. A rapid increase in construction took place, possibly due to the reorganization of the province. The amphitheater, the temple area and the provincial forum at the top of the city were probably built during this period. Most of the statues at these locations were probably placed there between 70 and 180 AD.

The patron of the city Senator Lucius Licinius Sura was appointed under the Emperor Trajan. Sura came from Tarraconensis and reached one of the highest offices of state. In the winter 122-123 AD Hadrian is thought to have visited the city to hold a conventus for Hispania. He also rebuilt the temple of Augustus.

Tarraco started experiencing severe economic difficulties at the end of the 2nd century AD. Few statues were built in honor of the city, probably due to a lack of funds.[18] This period also saw the defeat of the struggle against the Emperor Clodius Albinus, who was supported by the governor of Tarraconensis Novio, Lucius Rufo. At this time inscriptions dedicated to Provinciae Concilium start to disappear to be increasingly replaced by inscriptions dedicated to members of the military. There started being fewer influential merchants in the ordo decurionum (civil administration) and more patroni (large landowners and public senior officials). Severus rebuilt the temple of Augustus (Elagabulus) in the amphitheater, as evidenced by an inscription at the bottom.[19] 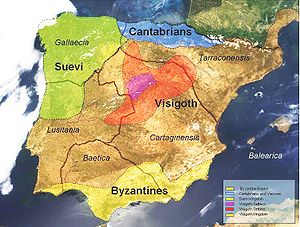 The Iberian Peninsula in late-ancient times.

After the imperial administration reforms of Diocletian, the peninsula became a diocese divided into six provinces that were much smaller than before. Tarraco remained the capital, but of a much smaller province. The buildings destroyed during the invasion of the Franks were slowly rebuilt or replaced by new ones. A portico of Jupiter was built between Diocletian and Maximian (286 to 293) which may be part of a basílica.[20]

In 476, following the collapse of Roman defenses along the Rhine, Tarraco was occupied by the Visigoths and King Euric. There is no evidence of destruction and apparently the capture of the city was relatively quiet. The Visigoths probably took over existing structures by establishing a small group of nobles, which the existence of Christian tombs in this period seems to confirm. The end of the ancient history of the city came with the arrival of the Muslims in 713 or 714.

The archaeological ensemble of Tarraco is one of the largest archaeological sites of Roman Hispania preserved in Spain today. It was declared a World Heritage Site by UNESCO in 2000. The city of Tarraco is the oldest Roman settlement on the Iberian Peninsula, having become the capital of the province of Hispania Citerior in the 1st century BC.

There are still many important Roman ruins in Tarragona. Part of the foundations of the large Cyclopean walls near the Pilate's offices are believed to be of pre-Roman origins. This building, which was a prison in the 19th century, is said to be the palace of Augustus.

Tarraco, like many ancient cities, has remained inhabited, and has been slowly dismantled by its own citizens for building materials. In spite of this, although the amphitheater, near the seashore was long used as a quarry, large parts of its structure have survived. It was built after the circus, and measures 45.72 meters long, although some sections of it may still be undocumented.

Inscriptions on the stones of houses written in Latin and even in Phoenician can be found throughout the city.

Two ancient monuments, a small distance from the city, have aged well. The first is a magnificent aqueduct, which crosses a valley 1.5 km (0.93 mi) from the city gates. It is 21 m (69 ft) long, and its lower arches, of which there are two rows, are almost 3 m (9.8 ft) tall. The other monument, to the north-west of the city, and also about 1.5 km (0.93 mi) from it, is a Roman tomb, which is usually called Torre dels Escipions, although there is no evidence to suggest that the Scipio brothers were buried there.[21]

UNESCO included the ruins of the ancient Roman city of Tarraco that on its list of World Heritage Sites because they meet two criteria:

Criterion ii. The Roman remains of Tarraco are of exceptional importance in the Roman development of planning and urban design and served as model for provincial capitals elsewhere in the world.

Criterion iii. Tarraco provides an eloquent and unparalleled testimony in the history of the Mediterranean lands in the Ancient times.