Mongol and Tatar states in Europe

The Mongol invasion of Europe from the east took place over the course of three centuries, from the Middle Ages to the early modern period.

The terms Tatars or Tartars are applied to nomadic Turkic peoples who, themselves, were conquered by Mongols and incorporated into their horde. They were mainly composed of Kipchaks-Cuman people.

Mongol-Tatar Golden Horde forces led by Batu Khan, (a grandson of Genghis Khan), began attacking Europe in 1223, starting with Cumans, Volga Bulgaria and Kievan Rus. They destroyed many Rus cities including Kiev,[1] Vladimir and Moscow in the process, sparing Novgorod and Pskov however. They originally planned to continue all the way to the shores of the "Great Sea" (Atlantic Ocean). However, upon learning of the death of Ögedei Khan (third son of Genghis Khan, uncle of Batu Khan) in 1241 they returned eastwards to their steppe homelands. This arguably could have saved the rest of Europe from suffering the catastrophes that befell the armies and towns of Poland, and Hungary, however the stretched lines of communication and the lack of vast open tracts of pasture land might well have been the undoing of such a venture.

The Tatars succeeded in establishing control over Rus principalities. It included both pillaging and bloody massacres in Russian cities.

In 1347, the Genoese possession of Caffa, a great trade emporium on the Crimean Peninsula, came under siege by an army of Mongol warriors under the command of Janibeg. Epidemic of bubonic plague had been ravaging Central Asia prior to the conflict in Kaffa. Brought across the Silk Road, the Mongols used disease infected corpses as a biological weapon. The corpses were catapulted over the city walls, infecting the inhabitants.[2] The Genoese traders fled, transferring the plague via their ships into the south of Europe, whence it rapidly spread. It is estimated that between one-quarter and two-thirds of the of Europe's population died from the outbreak of the Black Death between 1348 and 1350.

In 1380 Tatars were defeated in the Battle of Kulikovo by the Grand Prince of Muscovy, Dmitri Donskoi. In 1382 the Golden Horde under Khan Tokhtamysh sacked Moscow, burning the city and carrying off thousands of inhabitants as slaves. Muscovy remained a vassal of the Golden Horde until the Great standing on the Ugra river in 1480. 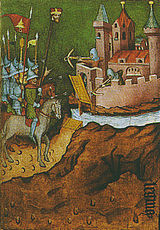 Poland was invaded by Tatars from the Crimean Khanate in 1506 with an army of 10,000 men, who were summarily destroyed. Tatar forces invaded again in 1589, invading Lwów and Tarnopol, but were beaten back by Cossack forces.

From 1599 the Polish-Lithuanian Commonwealth suffered a series of Tatar invasions, the goal of which was to loot, pillage and capture slaves into jasyr. The borderland area to the south-east was in a state of semi-permanent warfare until the 18th century. Some researchers estimate that altogether more than 3 million people, predominantly Ukrainians but also Circassians, Russians, Belarusians and Poles, were captured and enslaved during the time of the Crimean Khanate. A constant threat from Crimean Tatars supported the appearance of Cossackdom.[3][4]

For years the Khanates of Kazan and Astrakhan routinely made raids on Russian principalities for slaves and to plunder towns. Russian chronicles record about 40 raids of Kazan Khans on the Russian territories in the first half of the 16th century.[5] Muscovy was also being invaded by the Nogai Horde and Crimean Khanate which were successors of the Golden Horde. In 1521, the combined forces of Crimean Khan Mehmed Giray and his Kazan allies attacked Moscow and captured thousands of slaves.[6]

In the beginning of 16th century the wild steppe began near old Ryazan on the Oka River and Elets on the Sosna, inflow of the Don. Crimean Tatars chose to proceed along watersheds for their incursions. The main way to Moscow was "Muravski shliach", from the Crimean Perekop up to Tula between the rivers of two basins, Dnieper and Northern Donets. Having penetrated deep in the populated areas about 100-200 kilometers, the Tatars turned back and, having unwrapped wide wings, looted and captured slaves. Until the early 18th century, the khanate maintained a massive slave trade with the Ottoman Empire. Captives were sold to Turkey and the Middle East. In Crimea, about 75% of the population consisted of slaves.[7] The Crimean city of Caffa was the main slave market.

Annually, Moscow mobilized in the spring up to sixty-five thousand soldiers for boundary service. The defensive lines were applied, consisting of a circuit of fortresses and cities. Cossacks and young noblemen were organized into sentry and patrol services that observed Crimean Tatars and nomads of Nogai Horde on the steppe. About 30 major Tatar raids were recorded into Muscovite territories between 1558-1596.[8]

To protect from the invasions of the Nogai Horde between the Volga and Irtysh rivers, the Volga cities of Samara in 1586, Tsaritsyn in 1589, Saratov in 1590 were founded.

In 1571 the Crimean khan Devlet I Giray devastated Moscow with a horde of 120,000 horsemen. The Crimean Khanate was one of the strongest powers in Eastern Europe until the 18th century. The Russian population of the borderland suffered annual Tatar invasions and tens of thousands of soldiers were required to protect the southern boundaries. This was a heavy burden for the state, and slowed its social and economic development. Since Crimean Tatars did not permit settlement of Russians to southern regions where the soil is better and the season is long enough, Muscovy had to depend on poorer regions and labour-intensive agriculture. Poland-Lithuania, Moldavia and Wallachia were also subjected to extensive slave raiding. The Crimean Khanate was conquered by the Russian Empire in 1778, bringing an end to Mongol and Tatar rule in Europe.