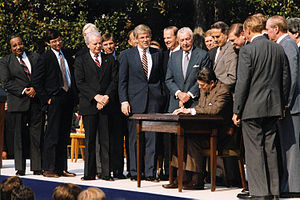 President Ronald Reagan signs the Tax Reform Act of 1986 on the South Lawn.

The U.S. Congress passed the Tax Reform Act of 1986 (TRA) (Pub.L. 99–514, 100 Stat. 2085, enacted October 22, 1986) to simplify the income tax code, broaden the tax base and eliminate many tax shelters. Referred to as the second of the two "Reagan tax cuts" (the Economic Recovery Tax Act of 1981 being the first), the bill was also officially sponsored by Democrats, Richard Gephardt of Missouri in the House of Representatives and Bill Bradley of New Jersey in the Senate.

The Tax Reform Act of 1986 was given impetus by a detailed tax-simplification proposal from President Reagan's Treasury Department, and was designed to be tax-revenue neutral because Reagan stated that he would veto any bill that was not. Revenue neutrality was achieved by offsetting tax cuts for individuals by eliminating $60 billion annually in tax loopholes and shifting $24 billion of the tax burden from individuals to corporations by eliminating the investment tax credit, slowing depreciation of assets, and enacting a stiff alternative minimum tax on corporations.[1][2]

The top tax rate for individuals for tax year 1987 was lowered from 50% to 38.5%.[3] Many lower level tax brackets were consolidated, and the upper income level of the bottom rate (married filing jointly) was increased from $5,720/year to $29,750/year. This package ultimately consolidated tax brackets from fifteen levels of income to four levels of income.[4] The standard deduction, personal exemption, and earned income credit were also expanded, resulting in the removal of six million poor Americans from the income tax roll and a reduction of income tax liability across all income levels.[5][6] The higher standard deduction substantially simplified the preparation of tax returns for many individuals.[2]

For tax year 1987, the Act provided a graduated rate structure of 11%/15%/28%/35%/38.5%. Beginning with tax year 1988, the Act provided a nominal rate structure of 15%/28%/33%. However, beginning with 1988, taxpayers having taxable income higher than a certain level were taxed at an effective rate of about 28%.[7] This was jettisoned in the Omnibus Budget Reconciliation Act of 1990, otherwise known as the "Bush tax increase", which violated his Taxpayer Protection Pledge.

The Act also increased incentives favoring investment in owner-occupied housing relative to rental housing by increasing the home mortgage interest deduction. The imputed income an owner receives from an investment in owner-occupied housing has always escaped taxation, much like the imputed (estimated) income someone receives from doing his own cooking instead of hiring a chef, but the Act changed the treatment of imputed rent, local property taxes, and mortgage interest payments to favor homeownership, while phasing out many investment incentives for rental housing. To the extent that low-income people may be more likely to live in rental housing than in owner-occupied housing, this provision of the Act could have had the tendency to decrease the new supply of housing accessible to low-income people. The Low-Income Housing Tax Credit was added to the Act to provide some balance and encourage investment in multifamily housing for the poor.

Moreover, interest on consumer loans such as credit card debt was no longer deductible. An existing provision in the tax code, called Income Averaging, which reduced taxes for those only recently making a much higher salary than before, was eliminated (although later partially reinstated, for farmers in 1997 and for fishermen in 2004). The Act, however, increased the personal exemption and standard deduction.

The Individual Retirement Account (IRA) deduction was severely restricted. The IRA had been created as part of the Employee Retirement Income Security Act of 1974, where employees not covered by a pension plan could contribute the lesser of $1500 or 15% of earned income.[8] The Economic Recovery Tax Act of 1981 (ERTA) removed the pension plan clause and raised the contribution limit to the lesser of $2000 or 100% of earned income. The 1986 Tax Reform Act retained the $2000 contribution limit, but restricted the deductibility for households that have pension plan coverage and have moderate to high incomes. Non-deductible contributions were allowed.

Depreciation deductions were also curtailed. Prior to ERTA, depreciation was based on "useful life" calculations provided by the Treasury Department. ERTA set up the "accelerated cost recovery system" (ACRS). This set up a series of useful lives based on three years for technical equipment, five years for non-technical office equipment, ten years for industrial equipment, and fifteen years for real property. TRA86 lengthened these lives, and lengthened them further for taxpayers covered by the alternative minimum tax (AMT). These latter, longer lives approximate "economic depreciation," a concept economists have used to determine the actual life of an asset relative to its economic value.

The Act required people claiming children as dependents on their tax returns to obtain and list a Social Security number for every claimed child, to verify the child's existence. Before this act, parents claiming tax deductions were on the honor system not to lie about the number of children they supported. The requirement was phased in, and initially Social Security numbers were required only for children over the age of 5. During the first year, this anti-fraud change resulted in seven million fewer dependents being claimed, nearly all of which are believed to have involved either children that never existed, or tax deductions improperly claimed by non-custodial parents.[9]

Changes to the AMT

The original Alternative Minimum Tax targeted tax shelters used by a few wealthy households. However, the Tax Reform Act of 1986 greatly expanded the AMT to aim at a different set of deductions that most Americans receive. Things like the personal exemption, state and local taxes, the standard deduction, private activity bond interest, certain expenses like union dues and even some medical costs for the seriously ill could now trigger the AMT. In 2007, the New York Times reported, "A law for untaxed rich investors was refocused on families who own their homes in high tax states."[10]

Prior to 1986, passive investors were able to use real estate losses to offset taxable income. When losses from these deals were no longer able to be deducted, many investors sold their assets, which contributed to sinking real estate prices.

To help lower income landlords, TRA86 included a temporary $25,000 net rental loss deduction, provided that the property was not personally used for the greater of 14 days or 10% of rental days, and adjusted gross income was less than $100,000.

The Internal Revenue Code does not contain any definition or rules dealing with the issue of when a worker should be characterized for tax purposes as an employee, rather than as an independent contractor. The tax treatment depends on the application of (20) factors provided by common law, which varies by state.

Introduced by Senator Daniel Patrick Moynihan, Section 1706 added a subsection (d) to Section 530 of the Revenue Act of 1978, which removed "safe harbor" exception for independent contractor classification (which at the time avoided payroll taxes) for workers such as engineers, designers, drafters, computer professionals, and "similarly skilled" workers.

If the IRS determines that a third-party intermediary firm's worker previously treated as self-employed should have been classified as an employee, the IRS assesses substantial back taxes, penalties and interest on that third-party intermediary company, though not directly against the worker or the end client.[11] It does not apply to individuals directly contracted to clients.[12]

The change in the tax code was expected to offset tax revenue losses of other legislation Moynihan proposed that changed the law on foreign taxes of Americans working abroad.[13] At least one firm simply adapted its business model to the new regulations.[14] A 1991 Treasury Department study found that tax compliance for technology professionals was among the highest of all self-employed workers and that Section 1706 would raise no additional tax revenue and could possibly result in losses as self-employed workers did not receive as many tax-free benefits as employees.[15]

In one report in 2010, Moynihan's initiative was labeled "a favor to IBM."[16] A suicide note by software professional Joseph Stack, who flew his airplane into a building housing IRS offices in February 2010, blamed his problems on many factors, including the Section 1706 change in the tax law while even mentioning Senator Moynihan by name, though no intermediary firm is mentioned, and failure to file a return was admitted.[17]

Name of the Internal Revenue Code