Taxation in the Ottoman Empire

Taxation in the Ottoman Empire changed drastically over time, and was a complex feudal patchwork of different taxes, exemptions, and local customs.

As the Ottoman Empire conquered new territories, it adopted and adapted the existing tax systems already used by the previous governments.[1] For instance, at the conquest of Belgrade, the Sultan instructed an official to gather information on the pre-conquest tax system, which would be replicated post-conquest. At the start of each area's tahrir (a tax ledger) was an outline of the traditional tax laws in that area.

This led to a complex patchwork of different taxes in different parts of the empire, and between different communities. In the Fertile crescent, the Ottomans inherited muqasama (sharing), a proportional tax on agricultural output, from the Mamluks; it was distinctly different from the uniform tax rates in other newly conquered territories. As farmers reacted to locally varying taxes on different farm products, this increased variations in agricultural output between areas, or even between villages; farms subject to the highest taxes switched to alternative crops.[2] Discriminatory rates tend to lead to production inefficiencies.

Even the Ottoman double-entry accounting method, merdiban, was inherited from the Abbasid empire.[3]

The defter was a tax register. It recorded names and property/land ownership; it categorised households, and sometimes whole villages, by religion. The names in defters names can give valuable information about ethnic background; these tax records are a valuable source for current-day historians investigating the ethnic & religious history of parts of the Ottoman Empire.[4]

The primary role of the Timar system was to collect feudal obligations, before cash taxes became dominant. The Ottoman Empire had a hierarchy of different types of estate; a Hass was larger than a Zaim estate, which in turn was larger than a timar. In the Balkans, peasants on timars typically paid a tithe or a tax in kind, of around 10%–25% of their farm produce; they were also obliged to pay other charges and perform corvee for the landlord, although these obligations may have been a lighter burden than in some contemporary Western European states.[5] This system closely resembles the medieval Serb feudal system, which in turn inherited from the Byzantine.[6]

A patchwork of different communities and taxes 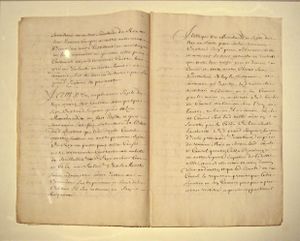 A treaty from 1536, granting concessions to the French across the whole of the Ottoman Empire

These taxes might be further graduated according to people's ability to pay. In 1530, the Eyalet of Rumelia had graduated taxes even between different religious subsets of a small ethnic minority; Muslim Romani paid 22 aspers per household, nonmuslim paid 25.[8]

In some cases, local taxes were imposed on nonmuslims specifically to encourage conversion;[9] conversely, measures might be taken at other times to prevent conversion, in order to prop up tax revenues.[10]

There was a practice of making villages communally responsible for the haraç tax; if one villager fled (or converted to Islam), the others would have to pay more.[11] In good years, community pressure would ensure compliance; but in bad years the difficulty of paying a share of other people's taxes could lead to a vicious circle, as more taxpayers fled:

There were 1700 persons that pay'd Harrach before the Venetian Warr, & that now there were but 700 left all the rest having abandoned their Houses, and Vinyards, & that those which remaine fly daily because they must pay not only for themselves, but for the whole 1700

In the Balkans, Vlachs had tax concessions under Byzantine and Serb rulers in return for military service, and this continued under Ottoman rule.[13] There was a special vlach tax, rusum-e eflak: one sheep and one lamb from each household on St Georges day each year. Because Vlachs were taxed differently, they were listed differently in defters.[14]

There could be considerable regional variance, and local lords might try to line their own pockets; around 1718 the kadi of Janjevo complained to the Porte that the local lord had set İspençe at 80 akçes, rather than the official rate of 32 akçes.[7]

There was also a patchwork of tax exemptions called muafiyet, which might be applied to towns, social groups, or even individuals.[15]

Orthodox churches were allowed to raise taxes among their communities; this led to a position where priests would pay very large amounts—to both church superiors and Ottoman officials—to get a senior post, expecting that the cost could be amply recouped from tithes.[16]

Sometimes, the "taxation" of churches by the Ottoman authorities could be shockingly direct: in 1603 Franciscan monks in Bosnia were imprisoned until they paid an arbitrary fee of 3000 aspers for permission to stay in their monasteries.[17]

Waqfs were, in one sense, a form of tax avoidance; a perpetual trust which was not, itself, taxed. However, some were very well-endowed, and provided various local services such as education which compensated for the Ottoman government's inability to provide local services funded by taxation. Some became so powerful that whole towns developed around the social services they provided; there are towns in the Balkans which include the name "Vakuf". A well-endowed vakuf might even take on the role of helping a community pay their annual tax obligations.[18]

Taxes were often difficult to collect, especially from rebellious areas. Conversely, high taxes could often provoke rebellion.[19] The demand for taxes was higher during times of war; these factors together could provoke a vicious circle of taxation and rebellion[20] – in 1585, 2000 villagers near Debar revolted over an increase in cizye.

While the local pashas imposed new forms of requisitioning and fines, the state did the same thing on a larger scale, with a number of 'extraordinary' taxes which rapidly became both ordinary and heavy.

The Ottoman state went bankrupt in 1590; this led to economic collapse and several years of revolts across the empire.[22] 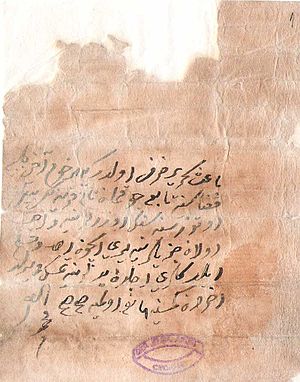 A receipt for cizye (poll-tax) paid by the village of Chokmanovo.

In 17th–18th century, changes in warfare (favouring professional infantry over feudal cavalry) put more emphasis on taxes rather than on military duties; hence, when timars fell vacant they were taken over by the state and converted into tax-farms and private estates.[23] Avariz, a centralised cash tax, became the norm rather than an exception.[24]

There was a shift towards fully owned hereditary estates rather than feudal lords; ciftlik were preferred to timar, because tenants had fewer rights – hence more cash could be extracted from them.[25]

The Hatt-ı Şerif of Gülhane declared the equality of different ethnic and religious groups – abolishing the Kanun-i Raya – and reformed taxes. However, not all these changes percolated to the outer areas of empire.[26]

In Bosnia, haraç was not abolished until 1855, at the same time that Christians were permitted to serve as soldiers; however, a new charge in lieu of military service appeared and was levied to haraç, so the only real change was a tax increase on those Muslims not serving in the military.[27] An 1859 decree set a tax-in-kind of one third for peasants on Agaluk (formerly Timar) estates, which became known locally as "tretina". This was in addition to a state tithe set at 10% of crop value. Other charges would push the total tax burden over 40% – all this in a state which could not provide the social benefits that are offered in modern countries with similarly high tax rates.[citation needed]

In 1839, Sultan Abdülmecid I pushed a set of major new reforms to the tax system, including the abolition of tax-farming.[28] The Tanzimat reforms introduced a new income tax; they also did away with many of the complex old taxes, although cizye remained. Taxation on corporate profits, in the modern sense, only really became possible after a cadastral survey in 1858–1860; the temettu (profit tax) was set at 3% in 1860, and later raised to 4% in 1878.[29]